<img src="http://www.qromag.com/wp-content/uploads/2011/02/thechurchfeb8.jpg" alt="The Church : Live" />To envision a set that is almost four hours long is a dream for the fans.  For the band, a daunting task,... 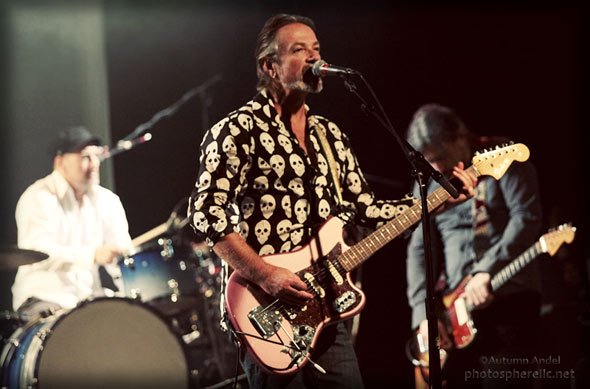 Click here for QRO’s review of The Church at Mississippi Studios in Portland, OR on April 8th, 2010

The Church is a band that keeps on giving.  After prolific 30 years, the Australian quartet commemorated its longevity last year with an acoustic tour (QRO review), which featured one song from each of their album.  As if two and half hour set wasn’t an enough treat for their fans, they’ve returned to the States with a three-album tour titled,  ‘Future, Past, Perfect’ – one from each of the three decades of their career.  When The Church first conceived this tour, Starfish and Untitled #23 had been pretty much agreed on.  1988’s Starfish was an obvious choice since it enjoyed the biggest commercial success.  2009’s Untitled #23 received the warmest reviews in recent years and represents the present.  Then came the announcement – the possible inclusion of a third record.  From the plethora of LPs, Priest=Aura took its place in the trinity.  Revered by both die-hard fans as well as the band, the 1992 release is the apogee of The Church’s artistic achievement.  A high concept album fueled by opium, where the elements were forged in some alchemic potion to release impossibly lush, dark, fragile, ethereal, and epic soundscapes.  To envision a set that is almost four hours long is a dream for the fans.  For the band, a daunting task, considering they’ve never played some of the songs live.  But if any group can pull off this monumental concert, it would be The Church.

In an unseasonably dry Seattle evening, on Tuesday, February 8th, The Church sold out their second night at the Triple Door.  Upon entering the venue, one is treated like a restaurant or a theater patron.  A friendly and polite face walked you to your table, apparently set for a fine dining.  As if sitting down for a rock concert wasn’t odd enough, can you imagine trying to eat noodles at the same time?  Though one could get a Rock Star, this customer couldn’t get a Perrier or a San Pellegrino; they only served Voss.  Attentive servers constantly walking back and forth also took some getting used to.  One fancy welcoming bonus, similar to the last year’s tour, was a letter-sized full-color glossy booklet.  While the venue’s environment may have been somewhat peculiar for a guitar band, the spacious stage and ample lighting indicated that it was at least accommodating for the performers. 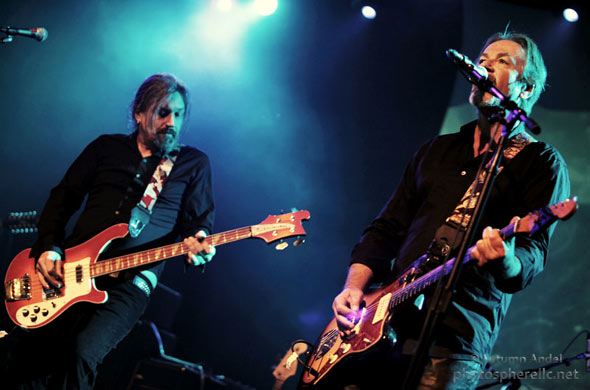 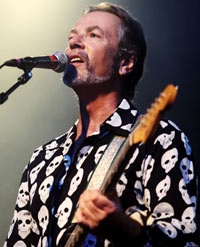 The show started off with a brief introduction by the lead singer/bassist, Steve Kilbey (QRO interview), "Good evening ladies and gentleman.  We’re going to give you Untitled #23 first."  Far removed from their eighties jingle-jangly post-punk days, The Church warmed up the audience with a sultry blues-tinged guitar weeping number known as "Cobalt Blue".  While it may have simpler chords than other songs of Untitled #23, "Space Saviour" proves to be a timeless track with its crescendos and hooks.  The band’s manager, Tiare Helberg, who also has her own solo music career, joined the stage for backing vocals on the haunting "Anchorage".  And a guy named Wesley took up bass, expanding the group into a seven-piece ensemble.

As usual, Kilbey stood at the center, flanked by the two guitarists.  On the right side, the more animated Marty Willson-Piper, supporting a beard and long hair in a ponytail, provided the majority of the backing vocals, while 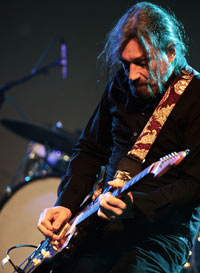 switching between guitars (including his twelve-string Takamine which has been taped up countless times over the years) and bass.  The more stoic Peter Koppes stood lankily at the edge of darkness on the left side of the stage, effortlessly playing his collection of guitars, which were given Ebow treatment now and then.  Drummer Tim Powels was mostly hidden by his substantial Mapex drum set, adorned with a set of string lights that would turn on now and then.  Craig Wilson – a young Australian musician who fronts a band, ASTREETLIGHTSONG, provided the additional instrumentation as he did for The Church for the Untitled #23 tour in 2009.  Buried in his mop of hair, Wilson was a busy bee filing out the songs with keyboards, guitar, six-string bass, mandolin, percussion, and backing vocals.  Most of the time, amorphous psychedelic images and abstract shapes, migrated across the screen behind the band.  But every once in a while, comic strips and M.C. Escher images disrupted the metaphysical nature of the music with its immobility and literalness. 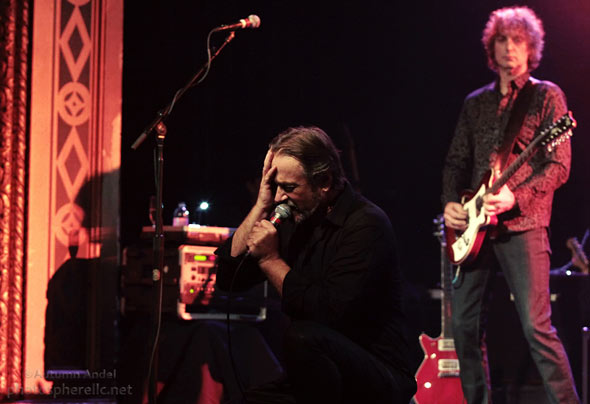 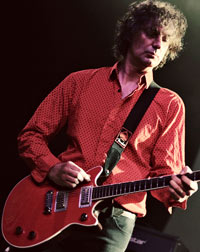 After about a 15 minute break, the band returned to play Priest=Aura.  Markedly different from prog rock of Untitled #23, the longest album on the menu with 14 songs, transported the listeners into another world, where everything drifted, swelled, and fell weightlessly.  Opener, the cinematic "Aura" was like a musical equivalent of The Odyssey, while the album’s first single, "Ripple", brooded in disenchantment, followed by one of the most beautiful songs The Church has ever created, "Paradox".  While "Kings", "Dome", and "Mistress" have been on the past set lists, the last four tracks of Priest=Aura have rarely been heard live.  Sinister number, "The Disillusionist", had Kilbey at the height of his interpretative dance – kicking and gyrating like a court jester.  The group toned down for the short and gentle, "Old Flame", before exploding into the lengthy (9:35) "Chaos".  Willson-Piper hunched over his Fender, shredding the strings to a sublime cacophony, while Kilbey’s bass and Powels’ snares thundered like a march of the Roman army.  Koppes traded in his guitar for the 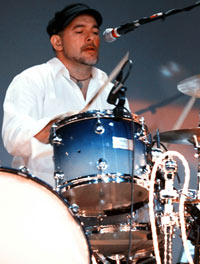 keyboard during the final song of Priest=Aura.  The instrumental "Film" fittingly sounded like a score for the closing credit – must have been a sad ending – or at least existential.  Fortunately, that was not the mood of the audience, who were quite elated.

One major difference from previous tours was the lack of bantering, which has proved to be a vital part of The Church concert going experience in recent years.  Kilbey’s antidotes and improvs were always a nice breather if things weren’t technically perfect, and made the audience feel more connected with the band and their music.  Guess if they’re playing three albums, one can’t be so greedy.

The biggest anticipation for the majority of the crowd was the album that spawned the unlikely top 40 US hit, "Under the Milky Way".  Many of the fans discovered The Church through Starfish, back when surfing the Internet on your home computer was just some geek’s fancy.  In addition to being 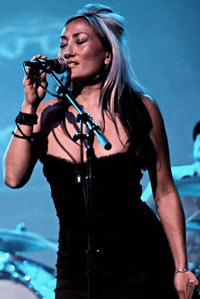 well-crafted record, it holds sentimental value for many because you always have a soft spot for your first love.  But the 30-minute intermission must not have been long enough to re-energize the homo universalis, who probably doesn’t share the same enthusiasm for the LP that spawned the group’s biggest hit, which has taunted him with inescapable nostalgia.  By the latter half of Starfish, Kilbey started to show signs of fatigue.  Even a life-long vegetarian who swims and practices yoga religiously, being in a rock band is no easy task for a man in his fifties.  The best songs from the album proved to be equally enthralling live – the rockier "Reptile" and "North, South, East and West" showcase The Church as one of the best guitar bands around.  While the mesmerizing opener, "Destination", and the equally captivating closer, "Hotel Womb", excels in songwriting.  And the veteran musicians performed them with a great finesse.  Starfish was the first album to feature Koppes ("A New Season") and Willson-Piper ("Spark") on lead vocals, which signaled their own solo and side projects.  It has become customary for both guitarists to take center stage for at least one song each.  One can only marvel at all the talent that is contained within one band.

Maybe Kilbey couldn’t recall every line of his lyrics, or the levels were not always perfect, and some songs sounded rushed at times.  But all in all, a superior live set that’s worth well over the ticket price.  The only thing that could top this musical feast would be The Church’s final stop in April at the Sydney Opera House with a full orchestra.  Lucky Aussies. 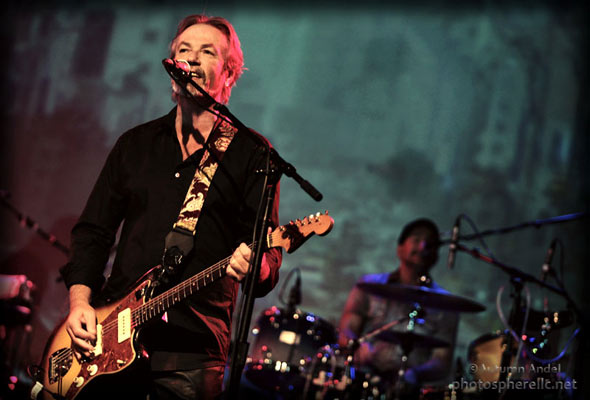