The Cinematics : Love and Terror 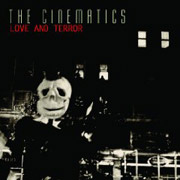 When The Cinematics put out their debut, A Strange Education (QRO review), on TVT Records in 2007, the English band looked set to follow in the footsteps of the likes of Interpol (QRO album review) and The Editors (QRO album review), as the ‘next wave’ of bands successfully tapping into the eighties Anglo-New Wave grandeur.  But then TVT (The Polyphonic Spree, Lil Jon), Billboard Magazine‘s #1 Independent Label for five consecutive years, filed for bankruptcy, leaving many artists in a lurch.  Some have recovered, some still are looking (like Ambulance LTD – QRO live review), but Orchard Enterprises, the purchaser of TVT at auction, has now put out The Cinematics’ self-made sophomore release, Love and Terror, and now hopefully the band can get back to getting where they should be.

The grand heartbreak and press that The Cinematics deploy right from the get-go with "All These Things" isn’t new – even aping that eighties New Wave sound (Joy Division, The Smiths) isn’t, but The Cinematics do it very well on Love and Terror.  There are sometimes darker, road-bass elements, such as in the title track and the following "Lips Taste Like Tears", but it is in the emotional grandeur of such pieces as "New Mexico" and "You Can Dance" where the band is at their best (the latter’s ‘tragic failing farm’ storytelling could almost be a modern update of The Grapes of Wrath or How Green Was My Valley).  If at times on the record, it feels a little rote, that’s only because The Cinematics are consistently strong, song after song.

It’s recently felt like New York & London are re-tapping into the Anglo-New Wave sound that so boomed earlier this decade, in acts from White Lies (QRO spotlight on) to The Morning After Girls (QRO spotlight on).  So if maybe The Cinematics were ahead of their time before, and are now just right in stride.