<img src="http://www.qromag.com/wp-content/uploads/2012/05/thecultchoiceofweapon.jpg" alt="The Cult : Choice of Weapon" /><br /> <i>Choice</i> has exactly what you're looking for in a hard-rock album, from killer shredding to a thumping beat to... 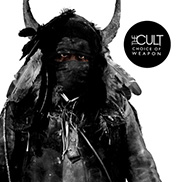 Hard rock has been on an alt-upswing in recent years, as hipsters finally start to appreciate metal and the harder end of things – so it’s a perfect time for The Cult’s first studio record in five years, Choice of Weapon.  Choice has exactly what you’re looking for in a hard-rock album, from killer shredding to a thumping beat to especially its epic nature.

Choice was preceded by choice single “For the Animals”, which does probably best exemplify the record – epic without being overwrought, rockin’ guitars without indulgent wankery; just generally kick-ass.  “Animals” might be the best song on Weapon, but hardly the only strong one.  There’s the epic roc “runnnin’ so fast” of opener “Honey From a Knife”, the epic torch-rock “Life > Death”, and the rock hard, rock big “Lucifer”.  ‘Epic’ does come up a lot when talking about The Cult, but this isn’t just an epic of epic epicness, as they are able to take different tacks without losing their base.  Amidst it all, some of the songs do feel a little more run-of-the-mill, like “The Wolf”, and “Wilderness Now” is actually a bit overwrought, but they still fit in nicely overall.

In 2009, The Cult vocalist and co-songwriter Ian Astbury said that the band was going to stop making new records and stick to digital releases, but thankfully he and guitarist/co-songwriter Billy Duffy changed their minds.  Choice of Weapon returns The Cult to their epic greatness.

MP3 Stream: “For the Animals“