The Dead Weather : Sea of Cowards 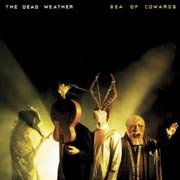 If you don’t know who Jack White is, you haven’t been paying close attention to modern rock.  White is the mastermind and fifty percent of The White Stripes (QRO live review) and the top billing in The Raconteurs.  He appears with The Edge and Jimmy Page in the guitar hero film This Could Get Loud, produced Loretta Lynn’s Van Lear Rose and pulled a reverse Phil Collins/Dave Grohl when he stepped behind the drums for his most recent incarnation, The Dead Weather.  This latest semi-super group is rounded out by vocalist Alison Mosshart (The Kills – QRO photos), bassist Jack Lawrence (The Raconteurs) and guitarist Dean Fertita (Queens of the Stone Age).  A funky, Deep Purple-ish organ should get credit as the fifth member.

Each of the album’s eleven tracks is sequenced to flow into the next for a near seamless 35 minute jam.  “Hustle and Cuss” follows “Blue Blood Blues” in this manner and the initial segue creates an inadvertent let down when it becomes apparent Mosshart is handling the lead vocals.  Mosshart, however, gives White a run for his money on the inflammatory “Gasoline.” Beneath her impassioned wails, the band churns out a demented music box cacophony.  White, besides being a guitar hero, is also a stone cold drummer.  During “Gasoline” he demonstrates his polyrhythmic prowess leading the track into a Led Zeppelin inspired breakdown inferno.  Other standouts (both fronted by White on vocals) include “Looking at the Invisible Man” and the organ heavy, psychedelic album closer “Old Mary” where White riffs on the Catholic prayer “Hail Mary”.

Even when the songwriting is underdeveloped (“The Difference between Us”, “I’m Mad” and “Die by the Drop”) there are enough interesting musical excursions to reward repeat listens.  At its best, Sea of Cowards is a welcome addition to the canon of acid, blues-based, classic hard rock.  And Jack White proves again that he has the Midas touch.