The Dears come back in a big way with the epic 'Degeneration Street'. ... 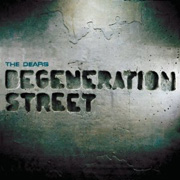 Five years ago, Montreal’s The Dears were one of the ‘next wave’ of Canadian indie acts to break through, thanks to their acclaimed Gang of Losers.  But then everything seemed to recede for the group, a changing collective based around singer/guitarist Murray Lightburn and keyboardist Natalia Yunchuk.  2008’s Missiles wasn’t equal to Losers, and the band didn’t ‘make it to the next level’.  Well, The Dears are back in a big way this year, with the epic and impressive Degeneration Street.

The size and skill of The Dears had always led them to be a bit too artistic and eclectic for their own good, but Degeneration sees them go more accessible and utilize their variety better.  There’s anthemistic from start-to-finish pieces such as “5 Chords” and “Thrones”, but also small, slow, and slowly growing ones like “Lamentation” and “Galactic Tides” (the latter of which brings to mind “Bulletproof… I Wish I Was” by Radiohead – QRO album review).  “Stick With Me Kid” is a dark, pressing escape from troubles, but before it comes the cheery & bopping “Yesteryear”.  The Dears can grind with melody on “Blood”, but also be ‘up with life’ on “Easy Suffering”.  And wa-wa opener “Omega Dog”, as well as the penultimate “1854”, both manage to be laid-back and ominous at the same time.

As wide-ranging as it is, Degeneration Street can still be hard to get a hold of, but pretty much each piece works great on its own, the whole thing coming together like a wide-ranging concert (and The Dears did play the album in its entirety at a series of shows in advance promotion of the record’s release).  Perhaps in today’s over-saturated (and under-purchasing) alternative music market, The Dears can’t reach the popular heights that once seemed possible.  But they’ve built an impressive record anyway.