The Decemberists : The Hazards of Love

<img src="http://www.qromag.com/wp-content/uploads/2009/04/thedecemberiststhehazards.jpg" alt=" " />Combining a taste for theatrics with an astounding command over the English language, Colin Meloy has weaved tales ranging from the life of a sea-faring... 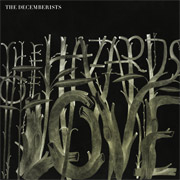 Combining a taste for theatrics with an astounding command over the English language, Colin Meloy has weaved tales ranging from the life of a sea-faring mariner to Japanese folk tales.  The Decemberists’ fearless leader easily keeps pace with even the most eloquent of grandfathers, perfecting the art of story telling.  A concept album seems like an obvious step for the Portland based quintet, but the announcement of such an ambitious project had fans biting their nails, fearing the cheesy concept albums in the vein of Styx and Yes.

Hazards of Love, their second full length release on Capitol, meticulously executes baroque-pop and prog (yes, prog) rock, set to Meloy’s ever enchanting lyrics.  Meloy has crafted a grown-up fairy tale, of sorts.  Unlike other’s failed attempts at concept albums, the story is intriguing, leaving listeners anticipating the next plot twist rather than rolling their eyes.

Meloy never aimed to write a rock opera.  After obtaining a rare copy of British folk revivalist Anne Briggs’ EP, Hazards of Love, he noticed that there was never a title track, and sought out to write one.  A pinch of pixie dust and some wand waving, and the 17-song album was born.  The tale is fanciful love story whose plot would sound absurd in the absence of Meloy’s elegant syntax.  Meloy assumes the role of the protagonist; with Shara Worden (My Brightest Diamond – QRO album review) lending her crushing blues pipes to play the evil queen.  The Decemberists may have missed their mark in “casting” Lavender Diamond’s (QRO album review) Becky Stark.  The fragile soprano never connected with her role as heroine, her voice lost among the sound.

The Decemberists took the necessary steps away from their standard folk-rock aesthetic, experimenting with bombastic prog rock.  Guitarist Chris Funk delivers shaking power chords, marking the presence of menacing characters and emotional turmoil.  “A Bower Scene” debuts the persistent metal guitar, erupting into a whirling, raucous chorus.  Without Meloy’s unmistakable voice narrating, the sound would never have been chalked up to The Decemberists.  They return to original form with the stories romantic plotline, keeping the slow-strumming acoustic sound that they have so flawlessly perfected over the years.  “Hazards of Love 2 (Wager All),” is a heartfelt address to a lover that would have fit perfectly on earlier albums.  The Decemberists bring in harpsichords, a children’s choir, string arrangements and synthesizers that float together in staggering layers of sound that, astoundingly, still allows focus on the lyrics.

Their gorgeous compositions have much less of the foot-tapping, sing-a-long qualities that past albums held, but that won’t prevent the music from lodging itself in the brain.  It is not an album of singles.  To isolate one song from the rest of the selection would be comparable to ripping out and reading one chapter of a book, taking it out of context.  The Decemberists recaptured the idea of listening to an album as a whole, rather than the pick-and-choose shuffling that modern technology allows us.  Sure, listeners will have favorites, (“The Rake” is definitely single material) but hearing one song will leave you desperate for the rest.

Liam Andrews of My Disco