<img src="http://www.qromag.com/wp-content/uploads/2010/06/thedigelectrictoys.jpg" alt=" " />The Dig are the kind of outfit that make being an NYC rock critic, discovering new bands, worth it.<span> </span> ... 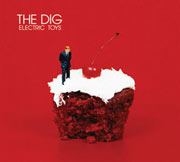 The Dig are the kind of outfit that make being an NYC rock critic, discovering new bands, worth it.  The four-piece, with origins in grade school in Westchester County, have live shows (QRO review) that make you wonder why they aren’t humungous already, as they manage to do a dirty grind with indie-skill.  They have been building a following, and are now finally out with their full-length debut, Electric Toys, that lets you put all those great rock ‘n’ roll songs on repeat.

Click here for photos of The Dig at Electric Toys release party at Mercury Lounge in New York, NY on June 5th, 2010 in the QRO Concert Photo Gallery

Click here for QRO’s review of The Dig at Mercury Lounge on November 19th, 2009

Click here for photos of The Dig at CMJ 2009 in New York, NY in the QRO Concert Photo Gallery

Click here for photos of The Dig at Maxwell’s in Hoboken, NJ on October 11th, 2009 in the QRO Concert Photo Gallery

Neither a wild party-garage outfit nor a serious indie-auteur, The Dig instead grab the best of both worlds, thanks to an undeniably hook-laden rhythm, awesome outlook, and yet still have a ‘there’ there.  The indie-grind to "Two Sisters In Love", "She’s Going To Kill That Boy", "He’s a Woman" and "I Just Wanna Talk To You" really can’t get any better – except for the explosive choruses, where they somehow do.  The songs that work great the first time you ever heard them, live in some dingy club, work just as well on record.

The Dig can also relax, yet retain their strong rhythm on "You’re Already Gone", "Sick Sad Morning" and "Shadow".  They can play with echoes, such as the catchy "Penitentiary" or more haunting "Look Inside".  And they can even go sad, like opener "Carry Me Home" or closer "Feel Like Somebody Else" – though those aren’t the best picks by the band to start & finish Electric Toys, and while the quieter "For All Your Sins" is nice, one can’t help but be impatient for The Dig to bring back their rock.

But that’s because they do it so well.  Delayed & seemingly self-released, Electric Toys should be the thing that makes everyone else sit up and take notice.  But The Dig should be Big already.