A man called E (plus a band called Chet) delivered an intimate, engaging, hilarious and thoroughly enjoyable performance. Playing the second of two nights in New York on the second of April, Mark Oliver Everett, leader of The Eels, joked with the crowd, but also showed his soul, while drawing from his extensive songbook and more – ably aided by his one-man backing band, ‘The Chet’.  While the setting at Highline Ballroom left something to be desired, E did not.

The ‘retrospective’ approach didn’t exactly come as a shock, considering E’s recent releases: a double-album of greatest hits, Meet The Eels: Volume One (QRO review), a double-album of outtakes, Useless Trinkets: B-Sides, Soundtracks, Rarities and Unreleased (QRO review), his autobiography, Things the Grandchildren Should Know, and a BBC documentary on his later father, physicist Hugh Everett III (inventor of the ‘many worlds’ theory of quantum physics), Parallel Worlds, Parallel Lives.  But E was neither a self-absorbed artiste nor exhibitionist-ly informal, hitting the right tone from the start.

After two sad-but-wry solo numbers, “Grace Kelly Blues” (the leadoff on 1999’s Daisies of the Galaxy) and “Ugly Love” (from The Eels last original record, 2005’s Blinking Lights and Other Revelations), E joked with the crowd about the ‘opening act’: a screening of Parallel Worlds, Parallel Lives.  “I just fired the projectionist; found out he had a bag of cocaine, cocaine and hookers back there…”  He went on, “I know why you’re all here – ‘cause I’m the son of a genius physicist.  It’s alright – I’ll take what I can get.  I’m used to it.  Happy to be the ‘Julian Lennon of physics’.”

E then brought out his backing band, Jeffrey Lyster, a.k.a. Chet Atkins III, a.k.a. ‘The Chet’.  The two partners in crime then joked about the screening (“So that DVD player you bough on eBay didn’t work so good.”  “It said, ‘Like New’, so I thought…”), physics (“Chet is equally adept at music as he is at physics, oddly enough.  And we can do either.”  After the cheers for music were louder than those for physics, Chet stated, “Physics it is!”), and more (“Could you turn your amp off?  It’s buzzing over there – it’s ‘harshing my mellow…’”).

But when they returned to the music, E was moving with the sad, stripped “Strawberry Blonde”, the b-side to his 1992 solo-released “Nowheresville” single (the oldest number of the night).  Things were more wry with another Blinking piece, “Last Time We Spoke”, and Useless Trinkets’s “The Cheater’s Guide To Your Heart”.  The alt-road “Souljacker Part 1” (from the titular 2001 album) was more restrained without as much distortion, more of a blues take than its usual guitar-rock.  E returned to his soul-baring with “Elizabeth On the Bathroom Floor”, the powerful opener to 1998’s Electro-Shock Blues.  Then came The Eels’ ‘animal triptych’, the sad “Dog’s Life” from Trinkets, hit Shrek soundtrack track “My Beloved Monster”, and Daisies’s funny audience favorite, “I Like Birds”.

E then drew upon another recent ‘looking back’ release, in the funniest way possible:

So I don’t know how many of you know this but, in addition to being a rock star [applause – and laughter] – thank you – I’m also now a best-selling author.  And I know that some people have been expecting me to possibly be reading from my best-selling autobiography at these shows, and I want you to know that I can’t think of anything that would be more pretentious, and I’m not going to do it, ladies and gentlemen.

I’m gonna make Chet do it.

‘The Chet’ proceeded to tell a hilarious story of E’s first days in L.A. as a struggling songwriter, going down to Hollywood and immediately meeting the one-and-only Angie Dickinson (Rio Bravo, original Ocean’s Eleven, NBC’s Police Woman in the seventies), who was presenting a star on the Hollywood Walk of Fame to Billy Vera & The Beaters (who’d had a hit song, “At This Moment”, on Family Ties).  This included Chet doing the voices of an aged leading lady Dickinson and an ultra-nervous, ‘voice-cracking’ young E, as well as a hipster-looking friend of Dickinson’s, who said in all seriousness, after E handed her a tape, “Angie’s a great person to have on your side…”

E & Chet followed that up with Shrek 2’s touch-sad “I Need Some Sleep” (also on Meet The Eels) and Daisies’s wry-funny “The Sound of Fear”, before E brought out another reading from ‘The Chet’.  This one started out similarly funny, covering the annoyance friends of Susan had about always hearing about her house when Beautiful Freak’s “Susan’s House” hit the radio, and returning to L.A. from Hawaii to meet his elderly landlady (with Chet again doing a great voice), but it all turned on a dime when Chet read that E had been in Hawaii because his sister had committed suicide.  Suddenly, the audience was getting a window into one of the darkest moments of E’s life (which had inspired “Elizabeth On the Bathroom Floor”), and it only got more moving when Chet retold the landlady telling E that she had seen a ghost of a young woman enter E’s apartment only a few hours before he had returned. 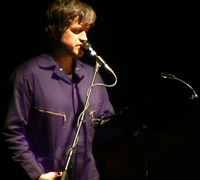 From that emotional highpoint, The Eels launched in to the best music of the night.  “Last Stop: This Town”, from Electro-Shock, the album that came after the loss of E’s sister and, later, mother (cancer), shuffled its shoes out of the darkness, while “I Want To Protect You” (another piece first released on Useless Trinkets) was an old-school up-country sing-along.  Soul Jacker’s “Bus Stop Boxer” was heavy with weight, while “Novocaine For the Soul”, The Eels’ first ‘hit single’, got a different interpretation with just a two-man band (and E on vocals/drums).  The Chet got to belt his pipes on a hard-rockin’ cover of Led Zeppelin’s “Good Times Bad Times”.  A ray of hope shined through with “Somebody Loves You” (the only piece in the night from 2003’s Shootenanny!), and The Eels slid into the encore break with the restrained “Souljacker Part 2”.

The Eels playing “Somebody Loves You” live at Highline Ballroom, New York, NY:

However, the tour-de-force came on Daisies’s mono-cool “Flyswatter”, as E & Chet showed off how in sync they were.  First, E was able to stop playing piano while Chet kept going on drums, then saunter over and swapped himself into the drum set without missing a beat.  Then, Chet went over to play piano for a bit, where they slowly went quiet, then boomed loud.  Finally, Chet went back over to the drums and swapped himself back in, again all the while not losing a step.

For their two encore returns, The Eels hit up two pieces from Blinking Lights, the epic-sad “I’m Going To Stop Pretending That I Didn’t Break Your Heart” and the slowly brightening “Blinking Lights (For Me)”.  And they didn’t stop joking: when E had to stop early into “Blinking”, he blamed mandolin-playing Chet, “You’ve got to practice your fifteen instruments more.”  Chet was certainly a jack-of-all-trades, going from guitar to drums, keyboard, mandolin, bowed saw and more (plus the dramatic readings…).  E added to the crowd when they restarted, “See if you can guess what song this is…”

E played the audience well throughout the set.  For some reason, Highline Ballroom (QRO venue review) was set up with rows of chairs (like it really was a book reading), even serving meals at tables on the sides and in the balcony (that had also occurred at Bob Mould’s one-man show there – QRO live review).  This all may have pleased the admittedly rather older crowd, but not only did it mean that it was cramped for all those on the floor who weren’t sitting, but, with E & Chet themselves on stools on a not-too-high stage, the temptation for over-familiarity was acute.  But E handled it well: the first time someone shouted for a song, he replied in deadpan, “Sir, please don’t talk to us.”  When a woman shouted for something else during the encore return, he returned, “Not askin’ for requests, but thank you.  When I woke up this morning, I was still the leader of this band, but thank you.  I still write the set lists around here, lady…”

Of course, with any artist who’s got as long a history as E, there are going to be songs you wished that he had played, but the choices were wise for the two-man, intimate setting (the distorted “Susan’s House”, for instance, is an excellent song, but probably wouldn’t have worked there and then).  More importantly, one got to see the history of E, from his father and Angie Dickinson all the way to today’s Useless Trinkets.  Along with the one-and-only Chet, he can make you laugh, he can make you cry – and never, never misses a beat.