<img src="http://www.qromag.com/wp-content/uploads/2008/12/theendoftheworldfrenchexit.jpg" alt=" " />Alt-country gets its own young Brooklyn pedigree with The End of the World and their latest, <em>French Exit</em>.<br />... 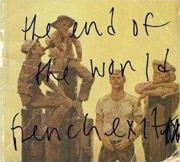 In Brooklyn’s indie scene, it only seems like everybody knows everybody, but there are a lot of acts who do know each other, and The End of the World are one of those bands.  Yet the duo of Benjamin Smith and Stefan Marolachakis still craft their own style, an alt-country twang that belies their youth and northern locale.  On French Exit, their sophomore full-length, that twang provides a steady backdrop.

Alt-country can often tend towards either its sadder, stripped, alt-folk side, or go the other way, towards loud country/rock.  Yet The End of the World manage to thread that needle by bringing both ends in on French Exit.  “Jody” is gritty, but laid over an alt-country wist, while “Someone Else’s Dollar” puts a relaxed twang above a strong procession.  Even finer can be found on the back half of the record, such as the haunting “Kate’s Dream”, that has alt-rock elements within, or finisher “Hawks”, a grand, sad alt-guitar echo (reminiscent of The Walkmen’s recent – You & Me – but more rockin’).

There are a few numbers that play straighter one way or the other.  “Railroad Living” has some workingman’s grit as it grows & grows, and “I Don’t Wanna Lose” is an appealing grander take.  Meanwhile, in between those two falls the sad alt-country beauty of “Learning”, and before “Hawks” comes the restrained sad strum and chorus of “Favorite Time of Year”.  And right before that is the one misstep in the quiet/loud combos on Exit, “Section House”, whose driving opening almost falls over itself before screeching to a halt and becoming some slow number.

Along with the forty seconds of airy tones in the middle (“Billy Silverman’s Pool House”), French Exit has another sub-minute interlude, “Born To Rage”, right at the beginning: a live recorded raising of beers to toast that provokes one shout of “Don’t get too sentimental!” and a counter-pointed shout, “Get more sentimental!”  The whole thing takes place in the basement that once belonged to the older brother of Dave Sheinkopf of borough/labelmates The Subjects (QRO spotlight), and the “slurring (1)” is credited to The Subjects’ Matt Iwanusa.  The End of the World fit in that Brooklyn indie metropole, but have carved out their own niche: as The Walkmen (QRO live review) led with sad barroom rock and White Rabbits (QRO spotlight) followed that up with dance hall pian-y, The Subjects have been playing sixties-bright, Harlem Shakes (QRO spotlight) throw in some dance steps, Frankpollis (QRO live review) bring some expansive Brit-rock, and Rahim (QRO album review) get dark and complex; meanwhile, The End of the World shows that the alt-country tree grows strong in Brooklyn.