Friday, September 26th was already going to be remarkable, as it was the date of the first debate between Senators John McCain & Barack Obama, held amidst the ongoing collapse of Wall Street.  It was also the latest reunion date of Richmond, Virginia’s Denali (QRO photos), playing across the river from the sinking Financial District at Music Hall in Williamsburg (QRO venue review).  But before Denali (which unfortunately is now Governor Sarah Palin’s Secret Service code name – don’t name your bands after towns in Alaska, kids…) came locals The Forms, playing their first show as a three-piece.

The loss of one of the twin brothers Kenny, Brendan, back in April for the tour with Cloud Cult (QRO live review) brought about a new guitarist.  But now, shorn of bassist/keyboardist Jackson Kenny, singer/guitarist Alex Tween (QRO interview) put down the axe and picked up the keys, creating a new tripod of sound (with drummer Matt Walsh taking up backing vocals).  This did mean that Tween couldn’t move around as much as he’d like to (he did muse about the possibility of bringing back the keytar – somebody has to…) – and no bass hurt Denali, when their bassist broke his instrument and, “None of the other bands tonight have a bassist…”.  But The Forms modified their style, a little less rock-hard aggression, and a little more math-rock wash – but didn’t lose their way.

Sticking almost exclusively to last year’s self-titled record (QRO review), The Forms opened on a slow boil with “Redgun”, before gliding into a higher air with “Bones”.  In general, it was that more atmospheric sound – though still rooted in rock ‘n’ roll – that dominated the evening, bringing more of a grand wash to such Forms tracks as “Focus”, “Alpha” and “Getting It Back”.  Even the more ‘quiet-loud’ numbers like “Redgun”, record opener “Knowledge in Hand”, or the high-hatting of “White Dot” and “Stravinsky” (the sole piece of the night from their 2003 debut, Icarus) felt more balanced, with Tween’s vocals & keys providing the core around which they built.  Such was the case with the 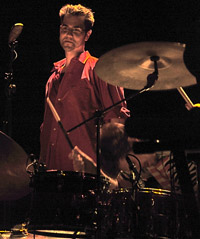 new number they closed out with, “Forward” – where they were joined by some friend of Walsh's in the crowd on drums, becoming a four-piece again, if only for a song…

After the four-year hiatus between Icarus and The Forms, The Forms have been very active and altering since the sophomore release came out.  This latest line-up change-up may prevent some of their more all-out hard-rock renditions (does this mean no more Nirvana covers?… – QRO video), but it lets the band grow into a wider, grander, more atmospheric Form.