<img src="http://www.qromag.com/wp-content/uploads/2008/04/theformsapril17.jpg" alt=" " />The Forms returned to rock their home borough of Brooklyn in a loud and powerful show....

The band, currently on tour with Rebel Group label-mates Cloud Cult (QRO photos), brought their friends to Brooklyn’s Union Hall on Thursday, April 17th.  Touring on the back of their new self-titled record (QRO review), The Forms hit up mostly that, but also saw some choice extras.

guitarist, Brendan Kenny, wasn’t there.  And the second thing was that this new guitarist wore his axe very, very high (see right).  However, the stage wasn’t exactly Kenny-less, as Brendan’s twin brother Jackson was still on bass and keys (and don’t worry – this wasn’t some more extreme version of ‘Tommy Stinson kicking out his half-brother Bob from The Replacements’; Brendan just couldn’t make this tour).

The Forms truly began at the beginning, with “Alpha” (which is curiously the second song on The Forms…), the expansive cry serving well to blow open people’s ears.  The change in volume from the opener, solo singer/acoustic guitarist Arms (QRO album review) was notable, but not over-the-top.  “Redgun” slowed things down a bit, but kept up its status as a standout track from Forms.  Things got surprisingly driving with back-to-back pieces from their 2003 debut, Icarus, in the laid-back-in-names-only “Seagull” and “Sunday 5 & 6”, though just as Forms was a finer record than Icarus, so were The Forms pieces better than those from their earlier album.

That could be seen clearly in the mid-set highpoint of “Focus” and “Bones”, both from Forms.  “Focus” finds singer/guitarist Alex Tween (QRO interview) at his most evocative, while “Bones” sees him at his most emotional touching – yet never did the band lose their noise.  Things got even grungier when The Forms covered Nirvana’s classic “All Apologies” (though nothing can quite match their MTV Unplugged-style acoustic version for WOXY.com during CMJ – QRO photos).  But the band still gave the piece its own modified spin, throwing a little more math-rock refinement into the mix. 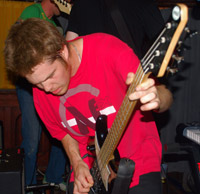 Following that, the band dropped The Forms’s “Getting It Back”, a number they claimed to have “never done before in New York”, and the uplifting haunt played well in their hometown.  Icarus’s “Stel 1 & 2” brought back the band’s loud power, followed by The Forms’s powerful single, “Knowledge In Hand”.  And the band finished off the night with the new “Forward”, seeing Kenny and drummer Matt Walsh switching instruments (though Walsh seemed to forget to put on his bass strap – see right) in a grind-attack with melodic parts and elements.

While the louder sounds of The Forms might not seem like the perfect fit with the enviro-friendly, family-collective Cloud Cult, don’t let first appearances fool you: The Forms throw a high-minded element into their sound (two are web designers, and Tween was a classics scholar) that makes it reach more than your ears (and Cloud Cult ain’t exactly smooth jazz, either…).  And at Union Hall, The Forms did their borough proud.