<img src="http://www.qromag.com/wp-content/uploads/2009/02/thefraythefray.jpg" alt=" " />The Fray pluck the same heart-string over and over to weak effect on their self-titled sophomore release. ... 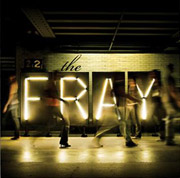 Alt-piano power-pop has found a comfortable place for itself in the mainstream, with grand, orchestral emotion lying somewhere between emo-rock and emo-pop.  Not the greatest of locales, it still can be done well in alt-circles (such as Air Traffic – QRO live review – The Brits always do it better…) and even closer to the middle (like with Jack’s Mannequin – QRO album review).  But then there are bands like The Fray, who put their heart on their sleeve so tritely as to lack any compelling force, while playing the same attempts at epic emotion over and over again.

The Fray burst out of Denver a few years ago on the back of singles “Over My Head (Cable Car)” and “How To Save a Life”.  An appearance on The Billboard Music Awards, Grammy nominations, and more followed: the band even played ‘Grad Nite’ for graduating high school seniors at Disney’s Magic Kingdom.  That synergistic push has continued apace with their new self-titled record: “How To Save a Life” first blew up thanks to being featured on ABC’s Grey’s Anatomy, and The Fray’s first single, “You Found Me”, debuted on the Disney-owned network, during a Grey’s commercial break, in ad for the new season of Lost (get it?…  For such an otherwise-excellent show, Lost’s taste in music seems to have peaked with “You All Everybody” – should have gone with the ample, and superior, offerings from Coldplay’s Viva La Vida or Death and All His Friends – QRO review – such as “Lost!”, “Lost?”, or “42”).

However, though the piano works well at times, the grand aspirations of “You Found Me” largely fall flat, something that can be said for The Fray as a whole.  Tracks such as “You Found Me”, opener “Syndicate”, and “Never Say Never” are overweening without a hint of ‘alt-’, even more one-note than their debut full-length, How To Save a Life.  There are moments of improvement, such as the darker tinge to “Say When”, brighter shine of “Where the Story Ends”, or added guitar-based oomph with “We Build Then We Break” – but also boring diversions, like the stripped to piano “Ungodly Hour” and stripped to country/rock “Happiness”.

Never that far outside the mainstream to begin with, expectations weren’t exactly high for The Fray’s new record, but with a genre that so temptingly, and precariously, balances alternative sounds and widespread appeal, uninteresting records like this just dismay that much more.