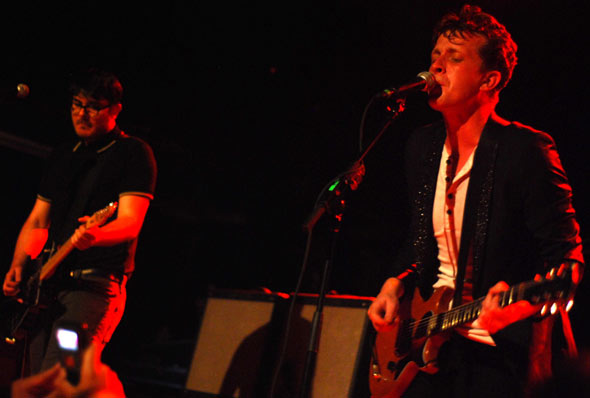 Click here for photos of The Futureheads one week later at Bowery Ballroom in New York, NY in the QRO Concert Photo Gallery

Click here for photos of The Futureheads at 2011 Tramlines Festival in Sheffield, U.K. in the QRO Concert Photo Gallery

While a lot of ‘fun’ bands have to work real hard to be so fun – and/or their crowd does, going crazy from the first note regardless of how well the band’s playing (or even what they’re playing), some bands do it easily, to the point where you feel that they’re having as much fun as you are – and you’re having a lot of fun.  The Futureheads are that kind of band.  You don’t have to know all their material, you don’t have to know their newest record, you don’t have to not think that their best record was their self-titled debut: live at Brooklyn’s Music Hall of Williamsburg (QRO venue review) on Tuesday, June 1st, they just couldn’t have been more fun.

The Futureheads playing “Decent Days and Nights” live at Music Hall of Williamsburg in Brooklyn, NY on June 1st, 2010:

Admittedly, The Futureheads did kind of peak with 2004’s The Futureheads and singles like “First Day”, “Decent Days and Nights”, “Meantime”, and their cover of Kate Bush’s “Hounds of Love” – 2006’s News and Tributes was too serious, 2008’s This Is Not the World (QRO review) a shift back to the fun indie-rock of The Futureheads, but not as good, and the out-that-day-(in-America) The Chaos (QRO review) somewhere between This and Tributes.  But the band kind of acknowledged it, implicitly at least, by stocking their set list (QRO photo) with mostly from their first & last, and only one from News.  Indeed, of the first seven songs, all but one were from Chaos or Futureheads, and alternated, with only World‘s “Walking Backwards” slipped into the middle of the six.  The Futureheads songs naturally stood tallest (though they unfortunately didn’t do first-ever single “First Day”, despite the day of the month…), and the picks from News and World were the choice selections from those records, News single/standout “Skip To the End”, as well as This single “Beginning of the Twist” also.  However, a number of Chaos songs really lit up live, such as “Struck Dumb” and “Stop the Noise”.

But any set list would miss out just how fun The Futureheads were.  They had a number of hilarious introductions, such as singer/guitarist Barry Hyde’s for Chaos single “Heartbeat Song”, “If you listen to college radio, you might know this song, or if you have our album.  And if you don’t, shame on you!…” – in a charming northern English brogue (akin to hilarious, no matter how downbeat or poppy their music is Scots, such as the post-rock Twilight Sad – QRO review at Music Hall – or indie-pop Vaselines – QRO review at Music Hall).  And afterwards, Hyde said how he’d always imagined that the audience would “start kissing each other” during the song.  After playing The Futureheads‘s “Meantime”, which Hyde had introduced as “a song about being boring”, guitarist Ross Millard (who bears a striking resemblance to The Decemberists’ Colin Meloy, or what Death Cab For Cutie’s Benjamin Gibbard looked like before he beefed up, grew his hair out, and married actress/singer Zooey Deschanel…) asked, “When you said ‘boring’, you didn’t mean me, did you?”, with which Hyde reassured his bandmate, “You’ve got some amazing stories.  Like what time you go to bed.  What kind of clothes you buy.  What kind of condiments you like…”  Millard also told everyone that someone kept calling him “a piece of crap” [note: fan actually was requesting the b-side to the “First Day” single, “Piece of Crap”], with which Hyde let the crap-screamer know that those were “fighting words – he’s been known to jump into the crowd.”  And there was Hyde’s simple, “It’s a pleasure to be here. [crowd cheers] It’s good to be anywhere…”

The Futureheads playing “Skip To the End” live at Music Hall of Williamsburg in Brooklyn, NY on June 1st, 2010:

However, the best dialogue came near the end of the set.  When they announced that their next song would be their last song, and the crowd booed, Hyde told them, “We’ve played twenty-five songs, people… [audience laughter] I promise.” [note: did not] And for the crowd to earn the band’s return, they were told that they had to be really quiet during the beginning of the claimed-to-be-last song, Chaos‘s “Jupiter”, or no more Futureheads.  “We played in a primary school the other day, and the kids weren’t quiet, so we left.”  Bassist David ‘Jaff’ Craig added, “‘All Things Bright and Beautiful’ wasn’t that day…”  And then there was ‘The Futureheads Singing Game’ for the song before the fake-last-song, “Hounds”:

The Futureheads covering Kate Bush’s “Hound of Love”, including ‘The Futureheads Singing Game’, live at Music Hall of Williamsburg in Brooklyn, NY on June 1st, 2010: 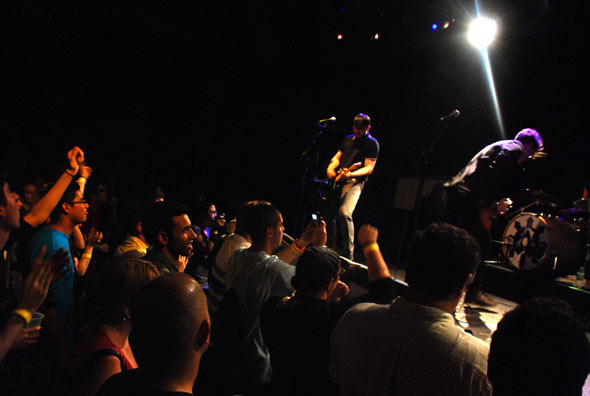 The pieces played for the encore return, Chaos‘s “Sun Goes Down” (“a Vampire sex song…”), World‘s “Work Is Never Done”, and The Futureheads‘s “Man Ray”, weren’t as good as earlier numbers like “Heartbeat”, “Decent Days and Nights”, or  “Skip To the End” (which itself was done more fun, less serious, than on News, including Hyde telling the crowd to do “the bouncy-bounce”).  But by that time, The Futureheads had earns loads of good will from the crowd – too bad the crowd wasn’t that large.  Perhaps that’s because the band is playing NYC area twice more in a week, Saturday, June 5th at Maxwell’s (QRO venue review) in Hoboken, NJ (QRO concert listing), and next Tuesday, June 8th, at Music Hall sister venue Bowery Ballroom (QRO venue review) in Manhattan (QRO concert listing).  Hopefully the weekend night & Tuesday night that isn’t the one after Memorial Day Weekend will earn greater crowds – because The Futureheads are so much fun live, even QRO is going back for a second helping…

[Update: QRO did catch The Futureheads again, at Bowery on 6/8 – QRO photos – and this time, they played “Piece of Crap”…]