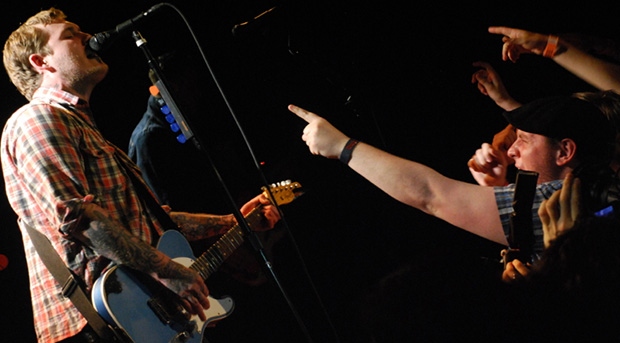 New Jersey gets very little respect, but one major exception to that is in music.  That’s mostly because of The Boss (QRO live review), but it’s been home to everyone from Frank Sinatra to Yo La Tengo (QRO live review), Bon Jovi to the Garden State soundtrack – and today, The Gaslight Anthem.  The newest sons of Jersey rocked the other side of Manhattan when they played a special show at Music Hall of Williamsburg (QRO venue review) on Wednesday, May 16th, which streamed live to the world. 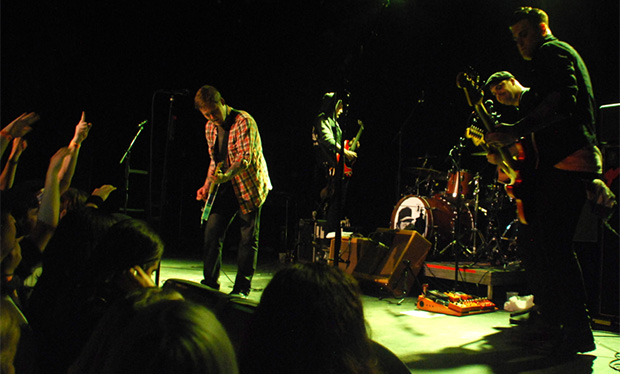 The New Brunswick boys (Rutgers represent!) played the special show before heading to Asbury Park that weekend for Bamboozle, and with all due respect to Bamboozle headliners Bon Jovi, Gaslight’s the best band to see at a Jersey fest (though Bamboozle is notorious for its schizophrenic line-up, mixing great acts with terrible ones, mostly emo…), but you didn’t have to be in the tri-state area to catch the show, as it was streamed live thanks to Bowery Presents and YouTube.  Still a ton of people came, with Music Hall having the kind of line to enter that it never does, including fans who found out that they had bought fake ticket, and some girl trying to negotiate her way in with the ‘not having that’ security.  The sold-out Music Hall was full, though not as oppressively as you might have expected, as many of the fans were older ones who hung back, and the place had opened a second bar at the back of the stage floor. 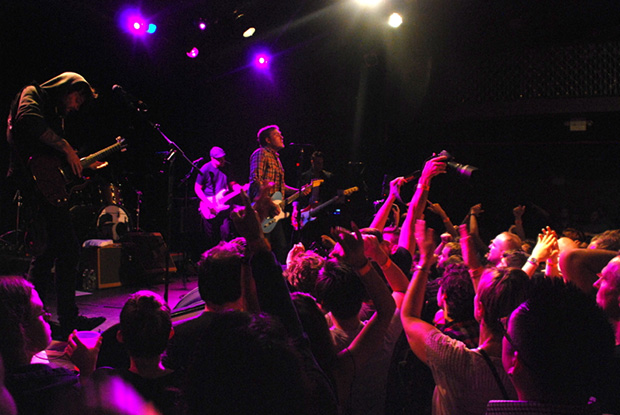 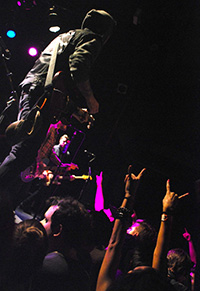 The band opened the night with “Great Expectations” and “Old White Lincoln” from 2008’s The ‘59 Sound, and surprisingly the set list (QRO photo) was weighted towards that record and not their most recent, 2010’s American Slang (QRO review), with almost half of the songs from ’59.  Perhaps the group was a little tired of playing American songs after touring that record, or it was just the natural shift away from the last record in preparation for touring the new one, Handwritten, out July 24th – but The Gaslight Anthem weren’t quite ready to do a ton of tunes from the yet-to-be-released album (especially to a crowd in Brooklyn & beyond wouldn’t have known them), so ’59 got the bump on the set list.  Thankfully, The ‘59 Sound has some great songs like “Expectations” and “Lincoln”, and The Gaslight Anthem didn’t skip Slang essentials like the title track.

The set was a little stronger towards the beginning and end, and away from the middle, with songs like those three and Slang‘s “The Diamond Church Street Choir” to open.  The group’s workingman’s punk lends itself to both the up-rock of those songs and the slower, sadder fare, but the latter suffers somewhat live, as it can take away from the momentum that’s been built up – but on quieter pieces, you do get the chance to hear yourself & the crowd sing along.  After four songs in a row from ’59 (including its own great title track), The Gaslight Anthem brought their new single “45”, which is the kind of emotive rock ‘n’ roll that the band does so well.  Also new was the bigger rock cry “Biloxi Parish”, and the group even did two of the four songs on 2009’s Señor and The Queen EP (though not its title track). 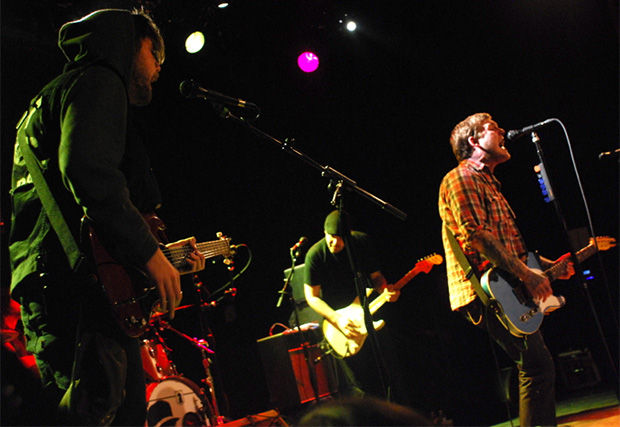 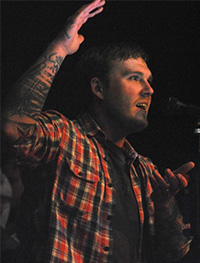 Singer/guitarist and frontman Brian Fallon also brought some hilarious stories and banter to the show, starting with his speech about what it felt like to be on stage & on screen:

I feel like The Beatles on television.  Or – I feel like the guy who doesn’t show up at the awards show.  When they say, “And this guy…”, basically what they mean is the guy was too cool for school to show up at the awards show.  When I was a kid, it was Axel Rose.  He’d be on the TV screen – I don’t care; that guy’s a pig.  Why don’t you listen to Appetite For Destruction again and see how many chicks it’s offending.  Dude, I was so blind to it at seven years old, I didn’t know what I was talking about, “Yeah, it is ‘so easy,’ being seven…”

From a distance, one might have thought that The Gaslight Anthem’s rock ‘n’ roll would make them the kind of band to like G ‘n’ F ‘n’ R, but Fallon found two distinct ways in one speech to distinguish themselves from that bloated Rock ‘n’ Roll Hall of Fame legacy act. 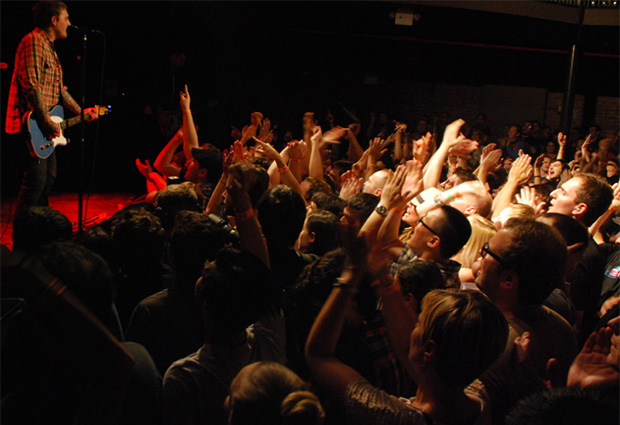 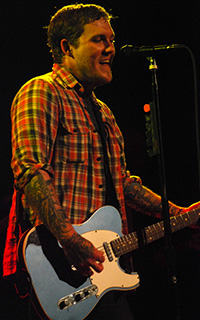 Fallon also joked about the Stanley Cup playoffs, which were happening at that very moment – the group were selling t-shirts with their name in either the New York Rangers logo or the New Jersey Devils one, “And whoever sells more is going to win” (and to the guy in the Flyers hat, “Good try…”).  He talked about their label guy back in the day selling their CD from his car, and playing small clubs, “Sometimes I miss those days, and sometimes I don’t, being right up in the crowd’s face – ‘cause people smell…”  He mimicked Pete Steinkopf of the other band from New Brunswick, The Bouncing Souls (QRO photos), asking if a guitar strap could go ‘rocker low’.  He even said how everyone in Williamsburg looks famous, “It’s like Los Angeles, but harder,” then commented on the hipster borough’s bedbug problem.

Along with the dissing of Axel, Fallon & Gaslight Anthem found time to pay respect to artists like Miles Davis (“Miles Davis and The Cool”), Elvis Presley (“Wherefore Art Though, Elvis?”), and especially The Clash’s Joe Strummer (“I’d Called You Woody, Joe”).  Of course, they still found time to fit in their non-personal noun songs such as the slow and sad “Here’s Lookin’ At You, Kid” and the great rockin’ “The Backseat”, right before going into the encore break.  The encore return (after fans dueled chants of “Let’s go Rangers!” and “Let’s go Devils!”) saw ‘59‘s great “The Spirit of Jazz”, American iTunes bonus track “She Loves You”, and “one of the greatest rock songs ever,” the theme to CSI: NY The Who’s amazing, still-strong-today “Teenage Wasteland” to close out the night.

The Gaslight Anthem playing “The Backseat” live at Music Hall of Williamsburg in Brooklyn, NY on May 16th, 2012:

Before the festivals and the summer tour (which ends with a show at New York’s Webster Hall – QRO venue review – on Handwritten‘s July 24th release date), The Gaslight Anthem did a special show for the fans both local (“Is anyone here from Connecticut?  You gotta do something about that interstate…”) and international (a fan came all the way from Australia, and had Fallon’s face tattooed on her leg – but apparently her husband loves it…).  They’ll be doing some special stuff for fan club members this summer, including free seven-inches and finding ways to make it so they can get tickets (Fallon complained more than once about scalpers, noting that no one had figured out how to scalp a live stream – must Jersey bands always have ticket resale problems?…) – for such a down-to-earth band, it’s just another way to stay connected.

Better yet, check out the entire live stream of The Gaslight Anthem at Music Hall of Williamsburg in Brooklyn, NY on May 16th, 2012: