Working man's punk gets even closer to The Boss thanks to fellow New Jersey locals. ... 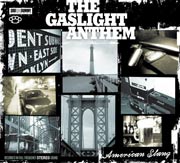 New Jersey has a long history of being identified with less than-reputable icons.  Today it’s Snookie & the cast of Jersey Shore (even though none of them are actually from Jersey…), yesterday it was the mobsters of The Sopranos, and, before that, [shudder] Bon Jovi.  Even Zach Braff couldn’t lift the stink off the Garden State.  But if there’s one icon that Jerseyians of all stripes can rally ‘round, it’s The Boss: Bruce Springsteen (QRO live review).  And that’s doubly true in music, though it’s mostly led to barroom tribute acts, but there are some who tap his sound for something more, like New Brunswick’s The Gaslight Anthem, who channel The Boss more than any other workingman’s punk band on their latest, American Slang.

Now, The Gaslight Anthem aren’t as good as Springsteen, but they’re also not a retread, either.  Opening with the up-anthem (you’re gonna hear that latter word a lot in this review, and not just in the band’s name…) title track, Boss hallmarks are all over the place, but it’s neither the classic young Springsteen of the eighties, nor today’s more modern, more mature Bruce like on Working On a Dream (QRO review), but a ‘modern young’ Springsteen – fitting, since The Gaslight Anthem is so much younger, and they developed as one of the bands at the forefront of the ‘workingman’s punk’ wave.  On numerous, yes, ‘anthemistic’ tracks, the band commiserates & celebrates the working class life of today, nowhere better than on “Bring It On”, which does their icon proud, without being a rip-off.

Pieces like “Bring”, “Slang” and later “The Spirit of Jazz” all hold up the state flag high, but others play it too straight and close to the Boss, such as “Stay Lucky”, “Orphans”, or “Old Haunts”.  The Gaslight Anthem do vary up their sound, but they don’t have as good a handle of what works for softer & sadder Springsteen in songs of their own like “The Queen of Lower Chelsea” & “We Did It When We Were Young”.  Better is the younger workingman’s punk of the up-catch “Boxer” and the down-home, up-blues “The Diamond Church Street Choir”.

New Jerseyians have often struggled with state pride & worthy recognition (did you know that Rutgers is the state university?  Neither did anyone else…), born of a state in the shadow of New York and (to a lesser extent) Philly, while NJ’s own stand-out cities are pictured as run-down urban ghettos like Newark, Camden, or (with gambling) Atlantic City (Princeton won’t have a thing to do with the rest of the state, or even the township that surrounds the borough).  And now even the home of The Boss, the Jersey Shore, has been sullied.  So, even if they stick a little too close to their idol, The Gaslight Anthem are keeping the home fires burning.