The Gaslight Anthem is far from broke, so they don't fix it. ... 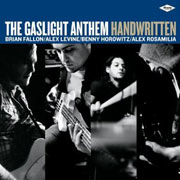 When artists break out of New Jersey, they break out big time, from Bruce Springsteen to Garden State‘s Zach Braff.  New Brunswick, New Jersey’s Gaslight Anthem blew up in a serious way these last couple of years, including 2010’s American Slang (QRO review), which channeled both today’s workingman’s punk and everyday’s The Boss.  Follow-up Handwritten doesn’t change their style, but if it ain’t broke, why fix it?

Handwritten starts with killer single “”45″”, and the song is everything you want in a Gaslight Anthem single – rockin’, pushing forward & upward.  Along with the following title track, the two songs are as fine Anthem as is out there.  The record also has a strong end in the evocative “Desire”, slower evoke “Mae”, and stripped acoustic broken man “National Anthem” (though it perhaps would have been better in the middle as a change of style, rather than as a downbeat closer).

However, in between The Gaslight Anthem get a bit repetitive and a bit overwrought.  Now, no one does overwrought like the Jersey boys – their missing father song “Keepsake” ain’t Creed, but it’s still a song about a missing father.  “Mulholland Drive” is a little obvious (most unlike the movie…), and the overwrought nature continues in “Too Much Blood” and “Biloxi Parish” (between that at “Mulholland”, is the band abandoning Jersey for warmer climes?…).

The Gaslight Anthem have already proved their bona-fides, and didn’t need serious growth with Handwritten – though some would have also been welcome.  But Springsteen hasn’t changed much in all these years, and (other than the cranky Leo Wieseltier of the back page of The New Republic) who doesn’t still love Springsteen?