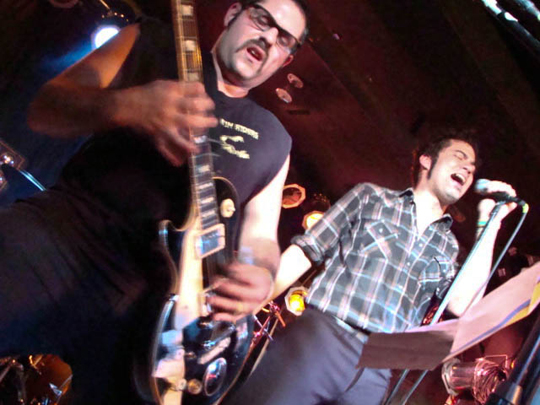 To put it simply: The Giraffes are what great rock ‘n’ roll forgot it was.  They’re incomparable on CD, and in-your-face 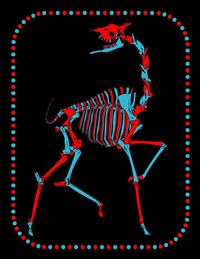 live shows deliver time after time, even if you’ve seen them over and over again.  The show is dangerous, comical, sinister, raunchy, and over the top all at once – they’ll impress you technically while blowing out your ears, sharing cigs, whiskey, and beer, and of course, truly entertaining you in every sense of the word.  It was no different at The Giraffes’ penultimate performance of 2009: a rainy Saturday night downstairs in NYC’s Studio at Webster Hall (QRO venue review).  Whilst a ‘Totally ‘80s Prom’ was totally going on upstairs, these four boys from good ol’ Brooklyn managed again to push the limits on a show that was already a total knockout.  Seeing The Giraffes is like remembering you have a pulse, remembering why you come out to see live music in the first place.

The Giraffes video for "Prime Motivator": 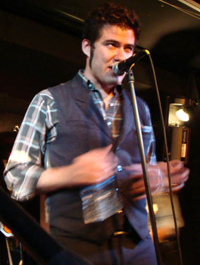 First of all, frontman Aaron Lazar has one of the best rock voices in NYC, hands down.  The ferocity of his delivery – the curl of his lip, the look in his eyes, the way he wails into the mike somewhere between a scream and a howl – that power is matched 100% by the tender, lounge-y croon that’s also fully at his disposal.  Lazar can grate and grind his versatile chops to the hilt one minute, and then slink into smooth, bluesy notes the next.  His throat is matched only by the voice of Damien Paris’ sweet, sweet guitar – there’s just no doubt about it, the man is skilled (he was also on tour in Europe as part of Julian Plenti’s band – QRO tour recapQRO review).  He mixes 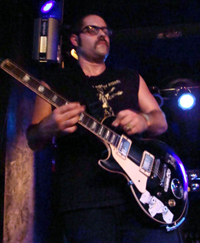 the singing style of surf with sick shredding, punk aesthetic, and even classic rock influences that coalesce as the juicy, thunderous melody that drives the band’s sound.  And hey, The Giraffes’ rhythm section ain’t too shabby, either.  Drew Totolos has always been a total powerhouse on the drums – he can work it fast, slow, or subtle, he spits a mean loogie, and yes, ladies and gents, he can even play the accordion.  Relatively new addition Jens Carstensen, who succeeded the band’s second bassist John Rosenthal, has clearly wasted no time fitting in.  He’s furious on his instrument – charging new energy into The Giraffes’ songs – and more often than not, ends up screwing around onstage almost as much as the usual suspects, Paris and Lazar… Which is saying a lot.

The Giraffes video for "Man U.": 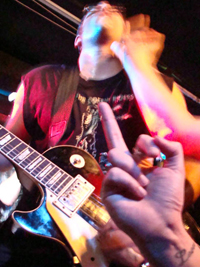 You see, The Giraffes bring new meaning to the word ‘show’.  They don’t get up there and play passively while ignoring the audience, or obliterate a crowd without fluffing them first (wink).  Instead, these guys put on a show – a real show – straight from the realm of mythos.  No joke.  And no matter how many years they’ve played together, they always find a new way to entertain each other onstage, which is, of course, duly entertaining for the concertgoer as well.  They’ll literally be pounding out these tunes with precision while – well… Lazar is clapping and shimmying like a man possessed while finding time to elegantly roll cigarettes, but he’s also head-locking Paris and grabbing Carstensen by the suspenders, even clenching them both by the backs of their necks as they play.  At one point of the show he’s whipping back and forth pointing and faux-reprimanding his bandmates like a caricature cop, while Paris skulks around and even Totolos finds a way to pop out from behind the drums, once dance-grinding on Lazar and then spinning like a dervish while the rest of the band watch.  You laugh, they laugh, and it’s all gravy. 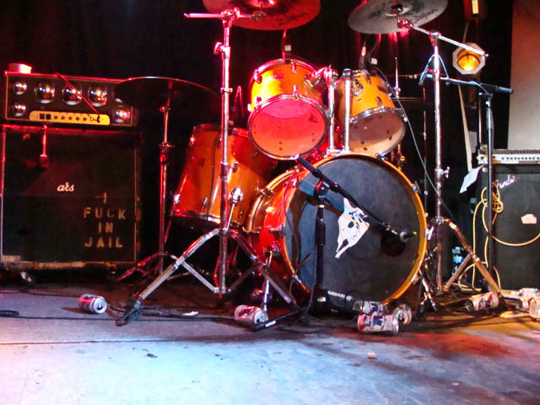 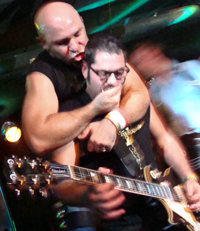 But seriously – The Giraffes also aren’t just screwing around.  Well, they are, and their reputation as a bombastic bar band that enjoys provoking the crowd and getting beer (and other liquids/objects) chucked at them follows them around like the aggravating aftermath of electrical equipment soaked with whiskey.  However – rowdy they may be, but they’re not assholes about it.  Ever.  And it doesn’t take more than a few listens to any of their CDs or EPs to come to the conclusion that this isn’t ‘just a bar band’ at all – it’s the increasingly rare amalgamation of intelligent, original music being translated into a truly one of a kind, sweaty, smoky, boozy, surf-punk-metal-rock-and-roll explosion of an un-fucking-forgettable live show.

The Giraffes video for "Clever Boy":

At Webster Hall that night, Giraffes classics like "Man U.", "Sickness (This Is)", "Haunted Heaven" and "Having Fun" were omitted from a set list packed with stunning cuts from their last outstanding full length, 2008’s Prime Motivator, in addition to the lesser heard but particularly ferocious "Tourniquet," the vintage Giraffes track and b-side "The Fan," as well as one song and its reprise from their latest epic, the independently released and quite aptly titled, The Giraffes Ruled, from earlier in ‘09.  The performance of each track stands out for its own reasons, but the second round of "The Border" – in which Lazar led the crowd in a spirited, snarling sing-along – and the band’s ultimate finale, "Sugarbomb", stand out as perfect snapshots of The Giraffes’ live energy.  "Sugarbomb" especially – let loose, loud and alive – becomes another force entirely, each and every time serving as a testament to everywhere they’ve been, a testament to dedicating every ounce of themselves to the show and dragging it out into delirium.  Right down to Lazar ditching his mikestand and singing with the cord wrapped tight around his neck – it’s a frenzy… Strangely gorgeous to witness.  And every time, they make it count.

The Giraffes playing "The Border" and "Done" live at Studio @ Webster Hall in New York, NY on September 26th, 2009:

A show like this also puts the diverse mix of styles The Giraffes integrate into their repertoire fully on display.  These boys have toyed with serpentine Middle Eastern sounds, nasty rock and roll romps, unflinching confrontations of mortality, sprawling wordless jams, haunting slow tempos, and that which cannot be described at all besides The Giraffes’ own brand of modern musical virtuosity.  They can’t be pinned into a particular genre, but rock ‘n’ roll and its old rebellious spirit – that is still alive and well in a band like The Giraffes – is what comes closest.  The craziest thing is of all is that perhaps they don’t even realize just how much of an indelible mark they make at every damn show they play.  Readers, do you need a diagram?  Go see this band – your Giraffes-battered senses will thank you for reminding them what it feels like to be alive. 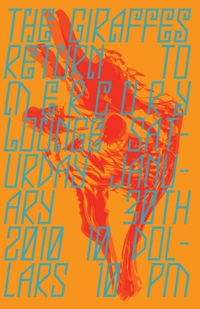 The Giraffes closed out 2009 with yet another Fearless Music taping at Crash Mansion (QRO venue review), and will be returning to their tried and true unofficial home of Mercury Lounge (QRO venue review) on January 30th ($10, 10pm – QRO concert listing).  A live DVD was also filmed at Union Pool (QRO venue review) last year, and they want YOUR questions for interview footage with each Giraffe.  Ask them anything, seriously: [email protected].  Additionally, a delectable video for "The Border" is in the works – no dates as of yet, but both cinematic gems aren’t to be missed.  Oh, and in case you’d like more – go to Spin the Bottle TV click "On Demand," "STB Live," and then "The Giraffes: The Power of Fatherhood."  You’re welcome.