<img src="http://www.qromag.com/wp-content/uploads/2005/02/thegofindinterview1.jpg" alt="The Go Find" />After the release of The Go Find's debut album, <i>Miami</i>, we got a chance to speak with the man behind the band, Dieter Sermeus. ... 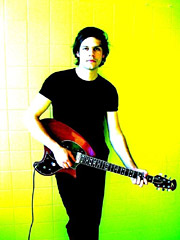 After the release of The Go Find’s debut album, Miami, we got a chance to speak with the man behind the band, Dieter Sermeus.  He spoke of inspiration, connections, and the experience of releasing the record.

QRO: Are you taking time now since making the album?

Dieter Sermeus: Actually we’re playing some shows, but i’ve seen it on the website where there’s only one tour date. We’re playing some shows in Belgium and The Netherlands and we’ll do some road shows in Germany and Austria, then we’ll do to some summer festivals then off we go to Spain and Portugal. There might be a slight chance that we’ll go back to the USA, but i’m not really sure of that yet. We’re not sure, but I’m already working on a new album. It’s not that many shows.

QRO:  So you’re playing summer festivals, which ones are you playing?

DS: I’m not sure yet, I think my manager has me doing Belgium, I think there are a lot in Belgium and Germany, but at the end of February and the beginning of March there are some festivals.

QRO: What was the recording process for Miami like?

DS: It all started in my small room with a computer, and I usually would start with a melody, I would take my guitar or keyboard, or I would start with a nice beat and try to incorporate the computer and acoustic guitars and pop music, I try to combine them all into one good song. I’m not really into, but I like electronic music. I try to make songs with computers and guitars and combine other things. So, I try to find the right balance. I wrote a lot in my room. I tried to write a lot of melodies. I learned a lot about computers because when you learn start making music on a computer, it’s kind of freaky, because you hae all these software instruments, and you start making music and start to think you’re something, and you make those crazy sounds. And I always know that wasn’t the kind of music I should be making – pop music. So as far as making songs with the software instruments and the computer and keyboards, after a while, I asked my good friend Arne from Styrofoam to help me out with the last part of the production, and it was finished. It took me a year to make the record, because I had to learn to how to work with the computer, which wasnt that easy for me because when I was younger, I just made music for my own art.

It took me a year to make the record, because I had to learn to how to work with the computer, which wasnt that easy for me because when I was younger, I just made music for my own art.

QRO: How many songs did you have to choose from?

DS: Actually, only 10. I just made 10 songs, and they were all ready to go. No, there were more songs, I chose some songs. Let’s say there were 15, and I picked ten out. But those 5 other songs weren’t that good, so it was any easy choice to make.

QRO: What were your expectations of the album’s success?

DS: Well, I thought I was going to be the biggest star in the world, and I would buy a house in Miami. [laughs] No, I was really thrilled that the record was going to be released by Morr Music, which meant the distribution was going to be very good in the United States, Europe, and Japan. Belgium and the Netherlands, and that’s quite a big difference. I just hoped that it would be played in different countries and lots people would like it. I know it’s difficult in the music business in some cities, and it’s just not that easy. But we played different shows, and it was better for us in the USA. We still play shows in different countries in Europe. Morr Music is satisfied with how things are going. Nice people are reviewing the record very well. I’m looking forward to the second album, and I hope that I am right now I’m laying good ground in countries and play more live. It’s amazing too, because I made the record on my own, and I work with good musicians at the moment, and we have fun playing live.

QRO: You released an EP called “Over the Edge vs. What I Want”, so which song won?

DS: Ah ha, you know, I had a good, friendly discussion with Thomas Morr, head of the Morr Music label, he said, “Well, my favorite song’s “What I Want”, but “Over the Edge” is a song that people will like better than “What I Want”, so we decided to release two songs on an EP sort of like a double single or something. At the moment, I think “What I Want” is winning, but tomorrow maybe I’ll say no and think “Over the Edge”.

QRO: You told me you’re working on the second album already. What are the plans for this one?

DS: We’re hoping to release it next year in April. So, I’m still playing shows for this album. So I will started working, but I hope it will be finished by the end of this year so we can finish it in April. I don’t know how it’s going to sound, but probably a lot of things like the first one. I’m not sure, because I’m now in the first phase of making a record, and just looking for nice sounds and melody maybe I’ll use more high drums on the record, but it all depends. I hope it will be as good as the first one.

QRO: Are you a solo artist for life?

DS: Yeah, I think will stay solo in The Go Find, when it comes to making the songs because I used to play in bands, and I’m really good friends with my old bands, but there were lots of discussions of how “You should write a song / You should write another one / That part isn’t good/ No that’s bad”, discussing the songs. And now when I’m writing the songs in the room I have, it’s just me and it makes it easier, I don’t know how, but it goes faster in a way. Sometimes I miss having the feedback of having friends in the band, but I can always have friends come in the room and say “I like this song” or “I don’t like this”, so I think for The Go Find I’m going to stay solo, but when playing live, it’s a lot more fun when there’s a lot more people on stage, and also, it’s a lot more fun to see a band having fun.

Sometimes I miss having the feedback of having friends in the band, but I can always have friends come in the room and say “I like this song” or “I don’t like this”

DS: It is still so young, it’s difficult. I had a really nice time playing on the Morr Music tour, but we played one show in France just a couple weeks ago, and that was a really good show because it was a really nice venue, very good time on stage now and because we have been playing together for a few months now and we all had a good time on stage. The US Morr Music tour was a very big experience for me, personally. It was my first time on tour in the US. I had been to the United States before, actually, only Miami, so I saw more of the US. So it was nice to play all those cities.

QRO: So did you play in Miami?

DS: Yeah, back when I played in Styrofoam. I used to play guitar with Styrofoam in the beginning, with him playing a laptop and me playing guitar. Just because we were really good friends, and he would just play on the laptop and I would on guitar. So we flew over to Miami, it was around March, the Winter Music Conference, and the record label and two other people invited us to play, so they flew us over for the weekend. So we were working on the album, that’s where I got “Miami”, it was a really strange experience where it was really warm and had to do some interviews and was all alone and went to downtown Miami and to the beaches and had a great time and that’s when I fell in love with Miami.

DS: In Styrofoam, I was just a guitar player and didn’t collaborate on any of the Styrofoam albums. Really good finds. So for The Go Find, I just made the songs at home, and Arne, at the end would produce. He’s a lot more experienced.

QRO: What did you learn from Arne?

QRO: How about Orange Black?

DS: That was a band that I played in for like 15 years in. That was a guitar band. We only played in Belgium, some shows in Germany and The Netherlands.

QRO: How did it feel to represent Morr Music in Japan?

DS: I’m very proud, it’s a really interesting country. The Morr Music tour was great, Thomas Morr was there. I was really happy to go, the people were showing up at shows and it was an amazing time, the food is great. on the other hand, i’m always happy to go abroad and play shows. In England, we got some OK ratings there, but it’s not our main… It’s better for The Go Find in the United States. It’s always been. I would like it if they invited me, but maybe when my…

QRO: You have a video for “Over the Edge” out. Whose concept was that?

DS: Thomas Morr brought his favorite from film school, “Hey i want to make this for ‘Over the Edge’”. 8 to 12 hours from Antwerp, and we’ll make some sort of animated clip, and I didn’t know what it was going to look like, so i wasn’t involved in making the concept, I was really happy with it.

QRO: What was the last mp3 you downloaded?

DS: I went to the Rilo Kiley website and listened to some songs, but I didn’t download them. I don’t know why, I guess I should do it. I listen to music a lot on websites, but I don’t download a lot of music. All of my friends have iPods, and, I’m an – I should start downloading mp3s. I should start, what I’ll start doing it from now on and I’ll send you an email. Ok I should do it.