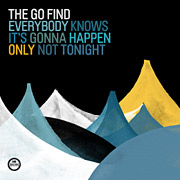 On their first two albums, The Go Find fueled their electronic pop with an ambitious array of intensity.  Dieter Sermeus, and eventually, his band mixed synths with guitars with a wide variety of emphasis, and both Miami and Stars On The Wall spanned from the basement to the attic of a metaphorical pop house.  On Everybody Knows It’s Gonna Happen Only Not Tonight, their third, the Sermeus-led outfit tucks their sound into its most comfortable groove and delivers a charming collection of bedroom-ready tunes.

With the velvety blend of sounds that starts the opening title track, the album’s mood is inviting and gentle, and the rest of the album flows just as smoothly.  As the jazz-infused melody uncharacteristically cruises past the five-minute mark, it’s a sign that this release might be the band’s most concentrated effort to date.

From there, the serene acoustic guitar and vocal harmonies that drive the next track “Love Will Break Us Up” are a perfect valley to the following uptempo, arpeggiated hill “It’s Automatic”.  The album rolls along on its own gravity, rarely having to push the accelerator.  The scampering duet with Karolien Van Ransbeeck on “One Hundred Percent” is one of the album’s more engaging moments, as if they were quietly standing by a pond at night sorting out their relationship.  The acoustic romp “Lottery Man” plucks inspiration from the soft side of the rock world as electronic effects buzz around the background.  “Heart of Gold”, a starry, sexy track, finishes the album on a perfectly mellow note while Sermeus softly delivers an ode to his subject.

As a whole, Everybody Knows It’s Gonna Happen Only Not Tonight is a tremendously graceful album – perfectly tailored for late night hours of relaxation.  The Go Find demonstrates that they’re all on the same wavelength, and their performance results in a beautifully rounded collection of bedroom pop that never loses control or momentum.