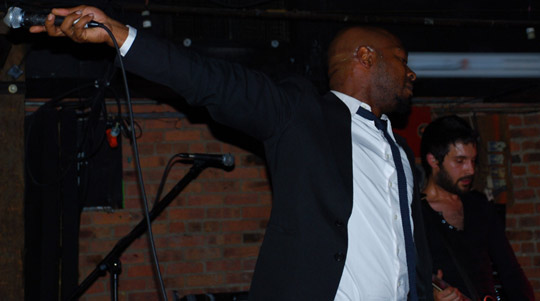 The day after Obama, et al, New York somehow managed to be even more excited, thanks to out-of-towners The Heavy & Illinois.  Playing Mercury Lounge (QRO venue review) on Wednesday, November 5th, the two bands drew upon the great & fun strains of American rock ‘n’ roll.  And it was all with a little help from their friends + 1…

Also one day after the release of the first chapter (of six) of Illinois’ Adventures of Kid Catastrophe (QRO review), the band stuck primarily to new material, but that didn’t keep them from connecting to the crowd.  Sometimes, they perhaps connected too well: singer/guitarist Chris Archibald (QRO interview) told the New York crowd, rather sheepishly, that the group was from World Series-winning Philadelphia – but didn’t want to start any trouble.  One audience member did yell, “Phillies suck!” – but he was from Colorado, and his reminder that The Rockies beat The Phillies in the playoffs last year was booed by all.  But Archibald calmed things down by proclaiming, “This ain’t a Gallagher show – we don’t want everyone wearing plastic.”  Although, he did earlier deride the crowd’s tempo-clapping ability… 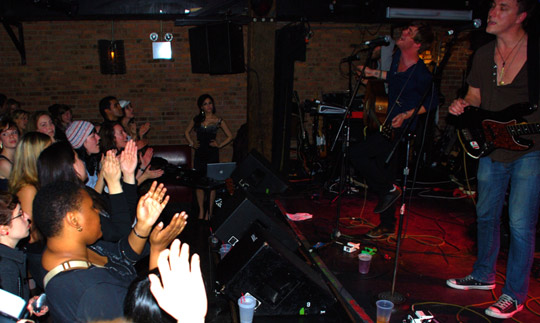 But Kid Catastrophe certainly had an Adventure on stage, with the band delivering upbeat, dirty-rock sing-a-longs like “She’s So Blonde”, “Thee”, and “Irish Whiskey”, not to mention getting the whole crowd in with finisher “Old Man Rivers”.  These numbers also saw bassist Martin Hoeger play more of a side-man, audience-revving role than he has in the past.  In fact, the whole band seemed to bounce off each other very well, whether kidding guitarist/keyboardist Dan Pawlovich with his false start (“Dude, you’re so fired…”) or dueling last crashes with drummer John-Paul Krypers.  There were also some quieter, more soulful, slower tracks like opener “Heart” and later “I Hate Love”, with Archibald more directly at the fore, but even there, he retained his trademark irony.  And the whole band absolutely rocked & rollicked with Chapter 1’s first single, “Hang-On”.

Illinois didn’t neglect their older What the Hell Do I Know? EP (QRO review) material – though they did break with tradition, and didn’t end with “Bad Day”.  In fact, there were only three What the Hell pieces on the night, but they were three of the most fun.  Midway through, “Screendoor” got the crowd extra-warm for “Hang-On”.  And right before closing out with “Rivers”, Illinois pulled out “Old Saloon” and top number “Nosebleed” (the song, Archibald reminded everyone, Mary Louise Parker shook her ass to on Weeds – “We had nothing to do with it…”).  And “Nosebleed” saw a special guest in opener Kenan Bell, who jumped on up to throw down some rhymes.

While Illinois are old favorites (QRO spotlight on), The Heavy were new – and boy did they make an impression!  The band started off in the dark with the gospel-esque a-cappella “She’s Got To Go” ( / “Ain’t takin’ that shit no more”), before lighting things up with “Strong Enough”.  Right from there, the four lads from the U.K. delivered some electric, dirty-blues/funk rock that had the crowd stompin’.  The set was mixed between pieces off their 2007 debut full-length, Great Vengeance and Furious Fire, and new songs, but all were alive thanks to singer Kevin Swaby.  Jumping around and egging on like a very young James Brown, Swaby also flirted with every lady up front, from super-fans to DJ Gina Bon Jersey.  But even their boyfriends couldn’t mind, such was his exuberant energy.

While The Heavy’s electricity never wavered, they did mix up their sound a bit.  The tone set by “Strong” continued on through bombastic numbers like Fire’s “Dignity” and “Colleen” right after, but then they brought out the wolf-calls from the crowd on “Big Bad Wolf”.  Yes, there was the requisite ‘Obama!’ exclamations before semi-political “Set Me Free”, but Swaby seemed more serious about “Those girls who are underage, and shouldn’t be in bars, but are in bars, and are getting so much attention, ‘cause they’re not supposed to be there…” introduction for “Sixteen”.  A more stop-start big blues/funk piece, that kept up through Fire’s “You Don’t Know” and “Girl”.

After returning to the dirtier sounds with the record’s “In the Morning”, The Heavy finished off the night with three non-Fire numbers.  “How Do You Like Me Know?” was driving full-bore, but it was “That Kind of Man” that had everyone jumping.  Eschewing any encore break, Swaby just told the crowd before “Man” that, as long as they clap loud enough after it, they’d play one more.  And one more they did, with the wild “Oh No!!!”.

Putting the two acts together was PR company-cum-record label +1 – who got about a million shout-outs during the two band’s sets.  It’s becoming something of trend for Plus One, who just recently saw Illinois join clients The Kooks & stellastarr* at Central Park Summerstage (QRO live review).  +1 is putting out all the chapters of Kid Catastrophe, and brought The Heavy across the pond.  And they joined the rest of the crowd in the well-deserved party.