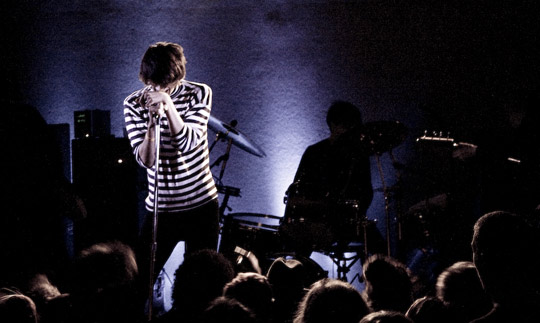 Electrons, those big-bang birthed particles that are part of the goo that makes up the atom, have long been one of the enigmas of atomic science.  Theories at the turn of the last century that they can serve as the bond between two atoms served as the springboard for quantum mechanics.  One of the most intriguing things about electrons is that they are particles that can act like a wave, something folks in the science world have dubbed “wave-particle duality”.  They can be physical.  They can be something that makes up the colors we see, the sounds we hear, all at once.

The Horrors’ performance at Doug Fir Lounge in Portland, Oregon on Wednesday, October 7th left one feeling like they had this “wave-particle duality” in common with the electron.  They were both form and wave at the same time.  A double-slit experiment, right down to the diffractive striped shirts.  Electron guitars and synthesizers colliding with and annihilating proton drums and basses.  Washes of electric fields emitting positive charge and repulsive force. 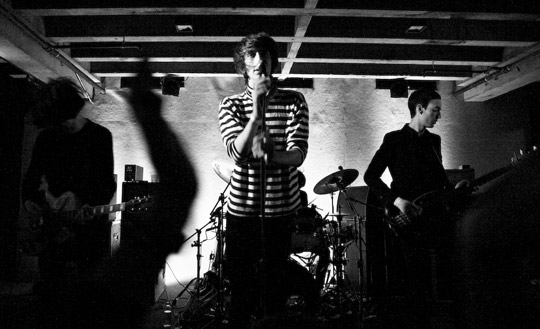 Things can happen when you’ve paid a visit to someone half a lifetime or more ago and come back to knock on their door to see what they’ve been up to.  If you were one of those people with The Horrors, and your last memory of them was Johnny Ramone hairdos on steroids, a love for The Ramones worn proudly on their sleeve; a predilection for Vox organs, fuzzboxes and two-minute, spring reverb-drenched psychedelic freak-outs, and one highly kinetic and inventive Chris Cunningham-directed video, then the old pal cracking that door open will be throwing of a dramatically different particle beam from the one that was once familiar.  With the release of Primary Colors (QRO review) this year on XL Recordings, the songs got longer.  The sound shifted from 60’s garage to an amalgam of early 80’s post punk in the vein of The Psychedelic Furs (QRO live review), The Chameleons, and Red Lorry Yellow Lorry grafted to the shoegazing guitar washes of bands like My Bloody Valentine and Ride.  The factor that truly sets them apart from their framers, their masons, is the keyboard work of Tomethy Furse on this new effort.  It’s DFA dance punk, it’s Roger Corman B-movie Wurlitzer, it’s Manchester-cold Martin Hannett all at once.  He does it on top of this monolithic wall of guitar, and he makes it work.  This isn’t the shoegaze stuff of waifs and dandies.  This is angry.  Wild.  Light-bending.  Subatomic. 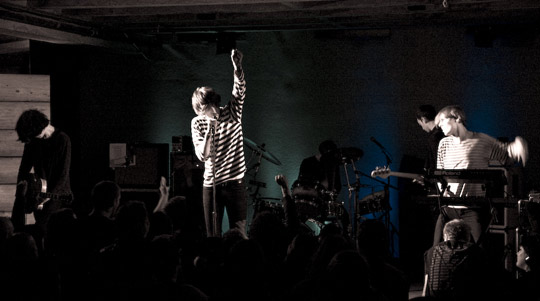 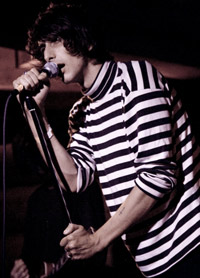 There was some trepidation before The Horrors took to the stage.  There were reports.  They are boring.  Too noisy.  Incomprehensible.  Two minutes into the set’s opener “Mirror’s Image”, it was clear there was no cause for concern.  Joshua Third stumbled and careened, playing with a precision that straddled firmly on the fence of reckless abandon.  Bassist Rhys Webb was a bounding, whirling dervish who never stopped moving for the duration of the set.  Keyboardist Furse stood Kraftwerk-stoic, serving up slabs of saw-tooth and square metallic waveforms, gracefully morphing them into percolating arpeggios.  Drummer Joseph Spurgeon kicked the song’s Manchester jack beat with a balance of precision and subtlety that would have left James Brown percussionist Clyde Stubblefield with an ear-to-ear grin.  Finally, there was vocalist Joseph Spurgeon, a tall, gangly figure who banged, shuddered, and flailed in a manner reminiscent of Joey Ramone, and a steely baritone that cut effortlessly through the wall of sound. 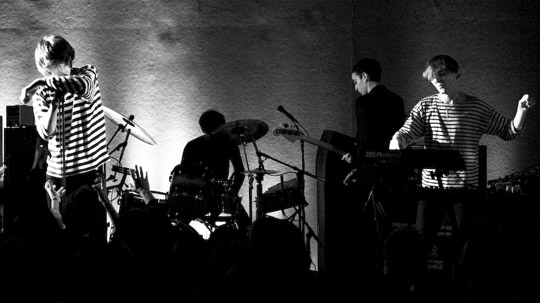 The band spun through a ten song set that surprisingly was comprised entirely of material off of Primary Colors that included “Who Can Say”, the album’s title track, and closed with the eight-minute opus “Sea Within A Sea”, the video for which has garnered much popularity on YouTube.  The songs insistent 8th note rhythm Spurgeon’s soaring pleas to “See the scraping sky / Far beyond the shallows” evoked Joy Division in its prime.

The band closed with just under a handful of jaw-jolting encores that opened with a reading of Suicide’s “Ghost Rider” that featured a bottom heavy bass line from Furse that caused hearts to murmur and walls to rattle.  “Ghost Rider” is a tough one to bite off, a song that is something of a No Wave “Louie Louie”, having been covered by many in the past.  Theirs was among the finest, truly making the song their own.  This was followed up with their early hit (and clear response to The Ramones’ “Sheena Is a Punk Rocker”) “Sheena Is a Parasite”.

The live room at Doug Fir is a low-slung bomb shelter of a space with many nooks and crannies, and as such is prone to sound problems.  It is unclear how The Horrors pulled it off, but the sound coming off of the stage was magnificent.  None of the flatness that occurs in that room could be heard.  Not only did it sound good, they pulled off that rare feat of actually surpassing the original recordings in sonic experience. 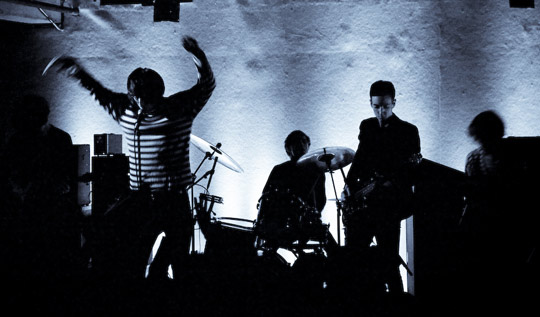 Opening for The Horrors, and for what appears to be the bulk of their tour, was Orange County, CA’s Japanese Motors.  Their salt water crusted brand of Smiths/Lloyd Cole early 80’s baroque college guitar pop seemed a bit out of place opening for The Horrors, but was nevertheless fine in its own right, and appropriately served in rapid fire succession.  Just like The Ramones would have done.

It would seem that, if nothing else, the two bands have that love for our double-diamond leather heroes in common. 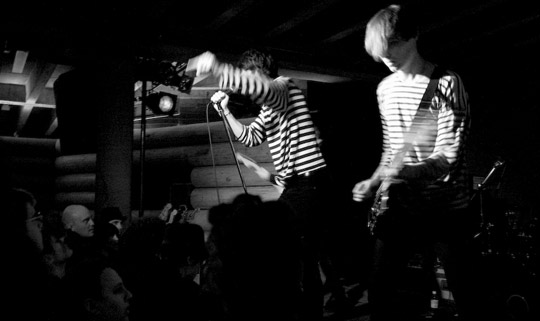