Fresh off their tour with the West Coast’s Sea Wolf, the four-piece was back home when they played the massive Prospect Park Bandshell (QRO venue review) as part of the summer-long Celebrate Brooklyn! Festival (QRO Festival Guide) on Saturday, July 26th.  The band played charmer to the large crowd, making for an enjoyable evening.

Playing mostly off their recently released self-titled record (QRO review), The Jealous Girlfriends were still able to jump around, musically, thanks to The Jealous Girlfriends’s own wide arc, from the high, twee “Roboxulla” to the fuzzy indie-rock of single “How Now” that closed things out.  In between, the restrained alt-touch of “The Pink Wig To My Salieri” was juxtaposed nicely with the soul-singer-diva nature of the following “Organs On the Kitchen Floor”.  A new song was particularly rockin’, though still a little rough, but the band ended things strong with such tracks as Jealous opener “Secret Identity” (a crowd favorite), the ‘old-then-new-now-old-again’ “Machines”, the carrying (and aptly titled) “Carry Me”, and “How”.

The Jealous Girlfriends also joked, even flirted with the audience.  Singer/guitarist Holly Miranda opened by telling the crowd they “looked nice tonight” (though not as nice as 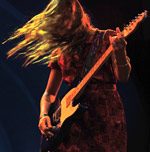 her…), later even saying “Sexy…”  Fellow singer/guitarist Josh Abbott bantered with Miranda in “a Sonny & Cher vibe”, while Miranda asked if everyone was “drinking that wine that looks like it’s juice boxes but it’s really wine?” – not to mention encouraging the crowd to “celebrate ourselves”.  The wind did toss the two frontpeople’s flowing locks, but it all spelled sweet.