The Joy Formidable : The Big Roar 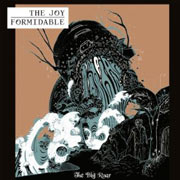 North Wales’ (now London) The Joy Formidable got a fairly large amount of attention from the get-go, touring Europe & Australia with the likes of Editors (QRO album review) & Passion Pit (QRO album review), were brought over to the States to play their first U.S. shows (QRO review) at New York’s massive Terminal 5 (QRO venue review) to open for Passion Pit, were praised by Garbage’s Shirley Manson & Hole’s (QRO album review) Courtney Love among others, signed to major label Atlantic, etc.  But what’s great is that they actually deserve it, putting out the excellent debut LP, The Big Roar.

The Joy Formidable had released some singles and A Balloon Called Moaning EP, and some of the best pieces on Roar are Moaning imports, carrying over the pressure and empowerment with singles “Austere”, “Cradle”, and “Whirring”, as well as “The Greatest Light Is the Greatest Shade”.  But the combination of road-pressure and empowering evocation is kept up on new songs such as the big and strong opener “The Everchanging Spectrum of a Lie”, newest single “I Don’t Want To See You Like This”, “A Heavy Abacus”, and the pedal-to-the-metal “The Magnifying Glass”.

Click here for QRO’s review of The Joy Formidable at Terminal 5 in New York, NY on January 9th, 2010

Sometimes the new and old tracks sound a little too similar (they perhaps shouldn’t have “Abacus” and “Whirring” right next to each other on the track list), and yet when The Joy Formidable slow/shrink down, the results aren’t as fine: “Buoy” is a grind (to get through), “Maruyama” is just an airy and ominous interlude, “Llaw = Wall” doesn’t need the restrained & ominous first half, and following penultimate “Chapter 2” is a little predictable and normal rock, compared with the rest of the record.

Asking The Joy Formidable to go full tilt start-to-finish on the debut full-length probably wouldn’t have worked, and it is good that they’re trying some things outside their wheelhouse – even if they’re already so good in that wheelhouse.  They’ll be headlining New York’s Webster Hall (QRO venue review – basically the step before headlining Terminal 5) on April 29th (QRO NYC Show Preview), so expect bigger things from this better band.

Wax Idols – “All Too Human”