<img src="https://www.qromag.com/wp-content/uploads/2011/05/thekillsbloodpressures.jpg" alt="The Kills : Blood Pressures" /><i>Blood Pressures</i><span style="font-style: normal"> is a return to what The Kills do so well, even if it only excels in their... 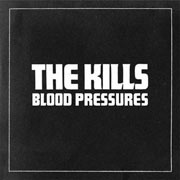 Before Brooklyn discovered the wonders of garage-rock, Great Britain was well in on the game with bands like The Libertines and The Kills.  But instead of going to the sound for lo-fi fuzz, lo-fi prices, and lo-fi skill, England’s garage was more about the authenticity of the style, sort of a bridge between the ‘rock revival’ at the beginning of this century/millennium with ‘The bands’ (The White Stripes, The Strokes, The Vines, etc.) and the Brooklyn garage.  The Brits were as able to stay together as the colonials – i.e., not very much – but some have been returning/reuniting (depending on whether you think it was a break-up or a ‘hiatus’), such as Jamie ‘Hotel’ Hince & Allison ‘VV’ Mosshart, a.k.a. The Kills.  Blood Pressures, their first since 2008 breakthrough Midnight Boom and the post-Boom hiatus, is a return to what The Kills did so well, even if it only excels in their wheelhouse.

While guitarist Hince is more of the musical mind behind the duo, singer Mosshart is clearly the live star, channeling seventies rock ladies with twenty-first century looks – and Blood Pressures likewise has a seventies-meets-this latest decade we haven’t named, with a pounding seventies-garage procession (also, for a band with no official drummer, the drums are great on this record).  It’s something that The Kills do repeatedly & do well on Blood, from opener "Future Stars Slow" and the following "Satellite", "Heart Is a Beating Drum", and "Nail In My Coffin".  If the first four songs on the record all sound fairly similar ("Future" is a bit darker, single "Satellite" a bit dirtier), it’s a sound you’d welcome even more of.

But The Kills vary it up, at least somewhat, after that – and the quality of a track almost entirely depends on how much it’s like the first four.  The slyer "DNA", "Damned If She Do", and "You Don’t Own the Road" are likely great live, with Mosshart selling it, but aren’t as interesting as the first part of Blood.  Better excursions are the old-timey Kills closer "Pots and Pans" and especially the more melodic "Baby Says", whose clean reverb makes a nice change for the band, without giving up on what they do best.  Unfortunately, the slow muddled sway from Hince "Wild Charms" isn’t, and even Mosshart can’t carry the strings-diva "The Last Goodbye" – neither are bad, but are not at all what The Kills should be doing.

During their hiatus, Mosshart teamed up with another guitarist from a male-female rock duo, The White Stripes’ Jack White, as The Dead Weather (QRO album review).  The White Stripes (QRO live review) are officially no more, but The Kills are back, and own their sound.

MP3 Stream: "Nail In My Coffin"