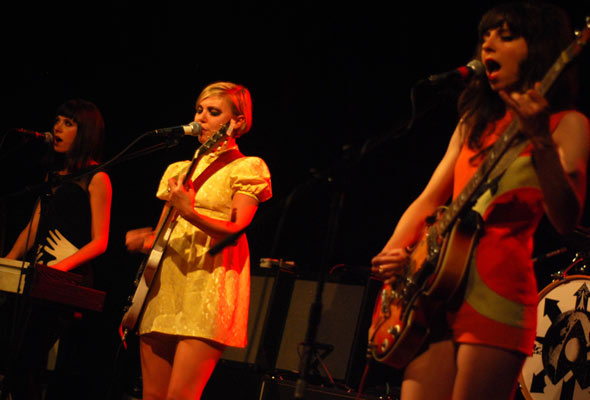 Click here for photos of The Like at 2009 MFNW in Portland, OR in the QRO Concert Photo Gallery

Is it wrong to start off a concert review by commenting on not the music, but the clothes?  But how could one not, when talking about The Like’s performance at New York’s Bowery Ballroom (QRO venue review) on Tuesday, June 8th, when the all-girl four-piece came decked out sixties-pop splendor?  And their sound did match their ensembles, girl-group rock that’s cheery even when "Wishing He Was Dead".

But first, the clothes – and the hair.  Singer/guitarist Elizabeth ‘Z’ Berg was sporting a white baby-doll outfit [note: as this is a bit out of QRO’s area of expertise, forgive any fashion mislabeling…] with short blonde hair reminiscent of one of Andy Warhol’s ‘Factory Girls’ in 13 Most Beautiful, like Edie 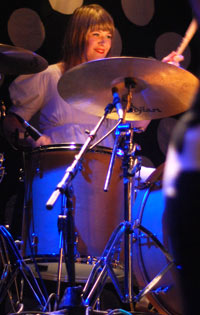 Sedgwick (QRO photo of a photo) or Ingrid Superstar (QRO photo of a photo).  Keyboardist Annie Monroe went for the darker look, beatnik-meets-gogo black leggings, top and hair, akin to a young Jackie O forced into the pop future.  Bassist Laena Geronimo moved the gogo into later part of the decade, with pastels and raised, near-beehive hair, like a Long Island girl on Laugh In.  And drummer Tennessee Thomas was a little more conservative, with poofy 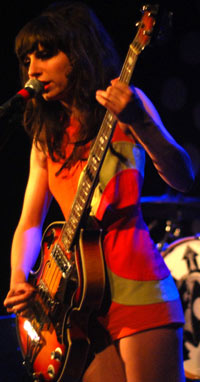 shoulders to her white dress and long blonde hair (but that didn’t seem to impede her drumming…).

Okay, this ain’t Teenbeat here – but The Like’s live performance was similarly sixties-inspired.  Playing entirely off of their out-next-week sophomore full-length Release Me (QRO upcoming release schedule), yes, the songs were mostly about boys & girls & relationships, but had a bit of a kiss-off bite to juxtapose with the upbeat attitude.  Pieces like "Catch Me If You Can", "He’s Not a Boy" and "Wishing He Was Dead" took on the boys, but maybe the best number of the night took on the ladies, "Walk of Shame" – though the catchiness made said walk sound so fun.  When The Like tried to go darker, in didn’t always work, like the out-of-their-ballpark "Narcissus", but more of a rock press did a lot for "Trouble In Paradise".

On tour with The Futureheads (QRO photos), you could tell certain girls in the audience who were definitely there for The Like.  Plus, as Berg said, "Hopefully, the people who released our record are here.  And, if so, this is the first time they’ve seen us play!"  And while their record industry overlords might have first been hit by their look, they couldn’t help smiling about their music. 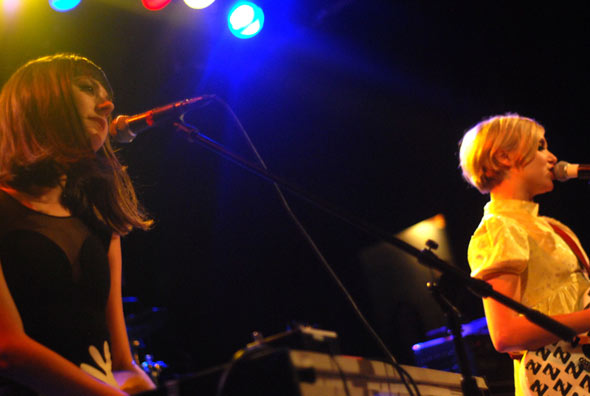