As Stephin Merritt lead The Magnetic Fields onstage, any member of the Royal Festival Hall's audience in London would be forgiven for assuming that they had been touring daily... 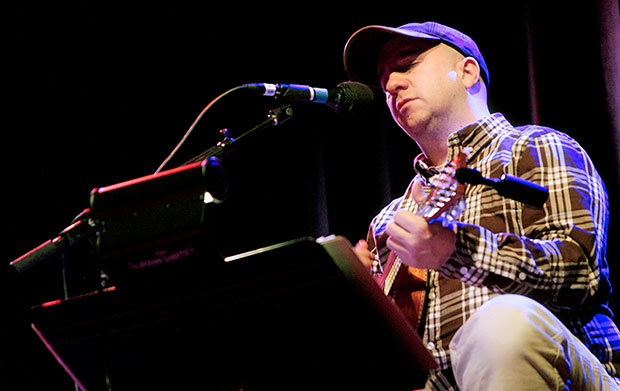 Click here for photos of Magnetic Fields at Variety Playhouse in Atlanta, GA in the QRO Concert Photo Gallery

Click here for photos of Magnetic Fields at Aladdin Theatre in Portland, OR on February 21st, 2010 in the QRO Concert Photo Gallery

As Stephin Merritt lead The Magnetic Fields onstage before unenthusiastically explaining that tuning is required prior to the performance, any member of the Royal Festival Hall’s audience in London would be forgiven for assuming that they had been touring daily for all 20 years of their career.  Fortunately, the indie pop band’s manager, pianist and occasional lead vocalist Claudia Gonson attempted to humour the crowd, as well as Merritt himself, between the group’s painful and often bitter love sonnets on April 25th.

Opener to i, “I Die” was the first song, where cello player Sam Davol soundtracked Merritt’s sorrow-filled voice in an almost classical melody.  While Merritt may often struggle to evade the endless comparisons to his seminal 69 Love Songs on every new record penned, this did not dissuade him onstage; this night London were treated to no less than nine songs from the three-hour album.  While Claudia Gonson faced the audience and took on a male persona addressing “Reno Dakota” in the sad sonnet, “A Chicken With Its Head Cut Off” and “The Book of Love” still sounded as fresh as in 1999 amongst “I’ve Run Away to Join the Fairies” and “Plant White Roses”.

Merritt’s dry stage presence was evident before “Come Back from San Francisco” and “Grand Canyon”, where he openly criticizes both areas despite living nearby in Los Angeles, serving only to add to his reputation of being tactile and abrasive.  Conversation aside, the performance could not be faltered – even with the newer, and subsequently, less familiar tracks such as “Goin’ Back to the Country” or “Andrew in Drag”, which replicated the recordings on Love at the Bottom of the Sea perfectly.

Merritt’s sourness was portrayed in the lyrics of a variety of songs such as “No One Will Ever Love You” and the more recent “Your Girlfriend’s Face”, in which he wrote of a plan to bury a couple alive on crystal meth, sung by Gonson.  Meanwhile, other oddities included demanding his own tea to be brought on to the stage, as well as briefly leaving halfway through to remove his shoes.

After addressing the often-overlooked Holiday with “Swinging London”, followed by “It’s Only Time”, The Magnetic Fields closed with a cover of The Gothic Archies’ “Smile! No One Cares How You Feel”, which was warmly welcomed by the audience.

The band returned to encore shortly after, selecting one of the absolute highlights of 69 Love Songs in “All My Little Words”, before finally closing with “Forever and a Day” from Merritt’s 2011 Obscurities.  Although it was undoubtedly a questionable choice to finish on such a track, this only added to the band’s charm after 90 minutes of onstage quips and a carefully selected and extensive summary of the back catalogue.

Although it was clear that Merritt’s fellow band members could become frustrated at his dryness, it was largely received in jest across the concert hall, and Gonson gladly credited Stephin Merritt for his songwriting abilities on Distortion (QRO review).  After all, it’s hard to see where titles such as “No One Will Ever Love You” would come from without such emotions, and though the audience was addressed coldly, they should ultimately be glad; without such sharpness, the extensive discography and riveting performances of The Magnetic Fields would not exist.