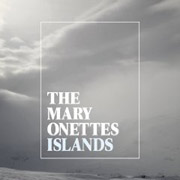 For their second full-length album, Islands, The Mary Onettes continue their love affair with post punk/new wave sound of 1980s and early 1990s.  What has changed?  The Swedish band added some string quartet to make their already sweeping melodies impossibly lush.  The songs are also more personal, reflecting the deaths of friend’s family members and the misfortune of losing the recording of their second album, forcing them to start over.  Overall, the album is more cohesive than their self-titled debut, with a theme of longing for the past.  How appropriate for a quartet who’s been more guilty of making nostalgic pop songs than any other current band.

“Puzzles” kicks off Islands, adding layers of instrumentation as it progresses in mid-tempo.  With a voice of a young effeminate boy, Philip Ekström reminds himself,  “Let’s make this year look good tonight / I know it hasn’t been the best year / So let’s be numb…”  The cautious track is followed by “Dare”, an EP single that was released back in April.  On the second track, Ekström sings with urgency, “Now I know returning here / Ain’t that hard, despite my fear…  Returning here is my goal…”  Reminiscent of melodies from The Mary Onettes best song to date, “Lost”, from their first album, “Dare” does not quite reach the goal of their previous effort.

“Once I Was Pretty” and “Cry for Love” were added tail ends of the recording of Islands.  While “Once I Was Pretty” fits nicely with shimmering jingle-jangle of previous two tracks, “Cry for Love” puts on the brakes to reflect on Ekström’s relationship with his girlfriend.  Well, it’s all ballad-y and pretty but the vocals drown in a syrup bath of keyboards.  Luckily, The Mary Onettes get back on the track with “Disappearance of Youth”, an anthemistic song dedicated to his girlfriend’s deceased mother.  The tune features a children’s choir to reiterate our fading youth, as if we didn’t already hear enough from Ekström’s aching voice, but does add a welcoming organic element.

The catchy pop melodies continue with another standout track, “God Knows I Had Plans”, while “Symmetry” resonates their first album.  And understandably, it was written before all other songs on the album.  This just means you’ll hear little less shimmery keyboards and jangly guitars, feeling more nocturnal than a gentle sunny day.

While several guitar riffs on Islands recall The Church in the early ‘80s (the opening chords of “Whatever Saves Me” sound like a slowed down version of The Church’s “Bel-Air” intro), Ekström fails to channel Steve Kilbey’s lyrical gift.  Nevertheless, the lead singer’s verbiage compliments the band’s euphonic arrangements.  The album ends nicely with “Bricks”, which sounded like a weak rival of the opening track but after a repeated listen, it becomes a nice bookend to an album so pretty that you expect to get nauseated from the overload.  Surprisingly, the gentle Swedes’ sincerity gets the best of you and you’re left with the rapture of nostalgia.

In their ten-year career, it is clear that The Mary Onettes are not interested in innovation but in perfecting the sounds they love.  If you’d like to try to make Islands at home, follow this recipe: stir in equal parts of the later years of The Cure and New Order, early years of The Church, add a good heaping of Ocean Blue, The Railway Children, a-ha, and a dash of Echo & the Bunnymen and Ride.

MP3 Stream: “The Disappearance of My Youth”