The Melvins : The Bulls and The Bees EP

The institution that is Melvins has done something incredible. ... 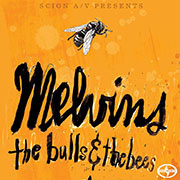 The institution that is Melvins has done something incredible.  They have managed to experiment and find room to grow with each album without alienating their original fanbase or putting out a single subpar release for over a quarter century, a feat that is perhaps unmatched in the world of metal, if not popular music.  That’s right; it has now been over a quarter century since their first album, Gluey Porch Treatments, and in the meantime they have been ingesting all forms of metal just to run them through the Melvins filter and spit them up in a decidedly better, and often weirder state.

It is easy to look past their newest effort The Bulls and The Bees.  It is only an EP and the full-length Freak Puke, a collaboration with Trevor Dunn of Mr. Bungle fame, is due on June 5th.  However, with a catalogue as consistent as theirs, we all know better.  Though only five songs long, The Bulls and The Bees serves as a reminder of the myriad of styles that Melvins have conquered.

Things start with “The War on Wisdom”.  After a drum intro, it’s a relatively straight-ahead chugger that occasionally charges ahead in brief bursts with both machine gun riffs and machine gun vocals.  After one minute of this, just as it appears that this is going to be the song, it takes a turn into a winding jam before settling into a triumphant chorus, then taking another left to finish in a trashy stoner-rock groove.  The next track, “We Are Doomed”, slows things down to a trademark Melvins crawl.  Usually their slower work is their dirtier work, but this song runs a relatively clean course with a slow building main riff, occasionally soaring and then going through extended winding riffs at the end.

The next two songs let Melvins’ experimental side to show.  “Friends Before Larry” starts off with a minute of abstract shuffles and scrapes before dropping all at once into a stomping funeral march that slowly grinds to a halt.  It is all coda for its entire three-minute duration.  “A Really Long Wait” drifts by with layers of woozy viola and a background of squeals that may be violin or dolphin.  Hushed harmonies occasionally swoop in and then drift off one line at a time.

“National Hamster” closes the EP.  Although it clearly has the strongest title of this release, it is also the weakest track.  It plays it right down the middle.  Not too fast, not too slow, not too heavy, not too weird.  If not for King Buzzo’s vocals, you wouldn’t be able to tell it was Melvins.  Although this last track is a bit of a letdown, it serves to show just how solid this band is.  Melvins B-material is still better than most bands’ A-material, so you can’t complain about this one track.  Although The Bulls and The Bees serves as a warm up for the upcoming Freak Puke, it is not merely a warm up.  It is yet another essential entry in the Melvins catalogue.

MP3 Stream: “The War On Wisdom“

Dirty Three : Toward the Low Sun