<img src="http://www.qromag.com/wp-content/uploads/2009/01/themorningaftergirlsjan27sm.jpg" alt=" " />The Morning After Girls lit up the night at a special preview show in their new hometown.<br />... 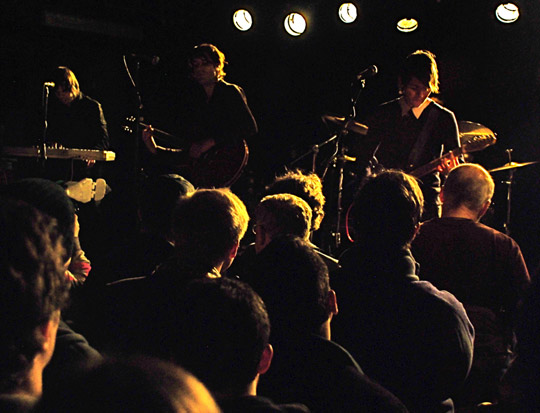 New York/L.A., designed-for-industry ‘preview’ shows are always a little tricky for a band: mostly/only playing new, yet-to-be-released material, small place, not-exactly enthusiastic industry types making up the crowd, business pressure, not part of a larger tour – kind of SXSW or CMJ (QRO 2008 recap) on steroids.  But recently relocated-to-NYC Aussies The Morning After Girls made it work with their sound, when they hit New York’s Mercury Lounge on Tuesday, January 27th. 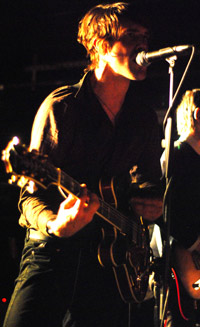 Mercury Lounge (QRO venue review) is a good place to have such an event (the other is going to be at L.A.’s Viper Room on Thursday), as it bats above its weight in sound and lighting system, being part of the ‘Bowery Presents’ circle of venues (along with such larger places as nearby Bowery Ballroom – QRO venue review – to even Midtown’s massive Terminal 5 – QRO venue review).  The band took advantage of that, especially the lighting, with bursts of it coming from behind them, in front of them – pretty much all over (though bassist EJ Hasen seemed stuck in the dark almost the entire time).  Mercury was packed with an older, but enthusiastic audience, as The Morning After Girls previewed their upcoming Alone, but also hit up a few older tracks.

The show started in complete darkness, and it was even harder to tell when the band took the stage, as they were all dressed in black as well (though singer/guitarist Martin Sleeman was sporting a rather Anglophile sweater-over-tie, while co-frontman singer/guitarist Sacha Lucashenko was more rustic-looking).  Draped in darkness, they opened on the aggressive jangle “Death Processions”, with Sleeman providing some interesting high backing vocals (though between that, the outfit, his skinny frame, and standing next to Lucashenko, Sleeman could use to butch it up a bit…).  Two more from Alone, “The General Public” and the title track, followed that.  On first listen, “Public” is a clear standout, thanks to its full-bore press and expanse, combining the best of Brit-rock and alt-drive, with catch.  But “Alone” stands up pretty well, too, from its alt-twang chord intro to its higher harmony.

From there, The Morning After Girls did step back a bit, going to “Hidden Spaces” from 2005’s Shadows Evolve, and its sad melody and beauty still make it a special one.  New “To Be Your Loss” and “Still Falling” mixed height and action, “Loss” a short, high attack, “Falling” high melancholy mixed with explosions.  The band returned to Shadows Evolve with that record’s own eponymous number, some faster, guitar & bass-rock.  But they then shifted gears completely, back to the alto register on the new “There’s a Taking”, with Lucashenko and Sleeman harmonizing in an almost choral way (the latter not looking any tougher…).  The Morning After Girls slid directly from “Taking” into Shadows’s “Chasing Us Under”, a brighter piece that matched well with the prior song, relieving some of the band’s darkness.  They then finished out the night with the new “Who Is They”, a fitting crescendo to close out the evening.

The Morning After Girls playing "There's a Taking" live at Mercury Lounge in New York, NY on January 27th, 2009:

‘Who is they?’ might also be a question that the crowd could have asked after the set was done, as no one in the band said a single unsung word the entire show, not introducing themselves, not thanking the crowd, nothing (the only moment that came even halfway to interaction was when, after they were done, drummer Anthony Johnson came back on to dissemble his drum kit and gave a little fists-in-the-air woo-hoo).  The Big Apple can be intimidating, especially to foreigners, but Lucashenko & Sleeman moved to the city from down under last year (and had played it before that).  The Morning After Girls’ music isn’t the kind that encourages joking with the crowd, and, more importantly, it stands up well all Alone.

The Morning After Girls playing "Chasing Us Under" live at Mercury Lounge in New York, NY on January 27th, 2009: