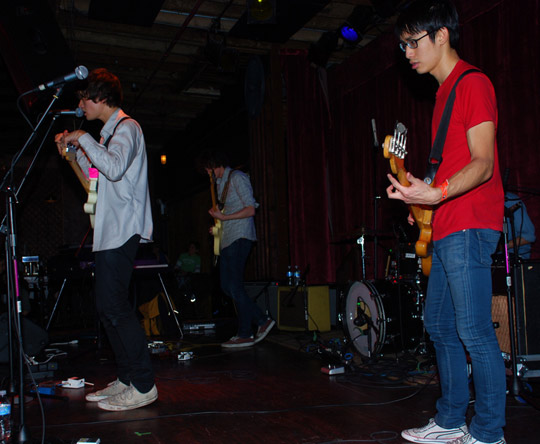 Click here for photos of The Morning Benders at MFNW 2009 in Portland, OR in the QRO Concert Photo Gallery

Click here for photos of The Morning Benders at SXSW 2009 in Austin, TX in the QRO Concert Photo Gallery

Neo-Beatles/Beach Boys bright indie-pop can be a bit of a tough sell in the middle of the week in one of the colder months of the year, especially when the economy’s heading south faster than the birds, but Berkeley’s The Morning Benders delivered on Wednesday, February 11th at Brooklyn’s Bell House (QRO venue review).  Yes, Valentine’s Day was coming up, but before that we’ve all got to contend with Friday 13th (as countless ads for the horror remake remind us – and we’ve got a second of the unluckiest of days, but thankfully not another movie, coming up again next month…).  But The Morning Benders brought some California sunshine to New York City.

Some of that is quite literal: February 11th was unseasonably warm, not just for the month, but even compared to the days prior.  And going on tour with the similarly Cali-bright (albeit SoCal, an important distinction to anyone from the northern side of the Bear Republic…) Submarines certainly helped them shine.  Still, The Morning Benders started off a bit on the wrong foot with “Doctor, Doctor”, as the new piece had some upswing sway, but was a little sedate for an opener.  From there, the band jumped into their 2008 full-length debut, Talking Through Tin Cans, with “I Was Wrong”, whose strong neo-Beatles pop stood up on its own as well as shifting the mood up to the record’s catchy and fun opener, “Damnit Anna”.  The upbeat piece started a little slow, practically begging for The Benders to kick it up a notch, which they thankfully did mid-stream, moving into a party. 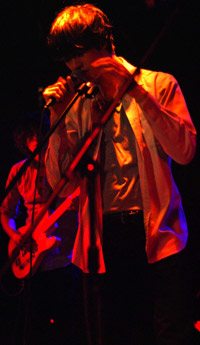 From that “kind of a dance song”, the band then experimented a bit.  Talking’s “Wasted Time” introduced some alt-country and even seventies-sly, but it was the new “Stitches” that was particularly interesting.  Not just sadder, but darker, “Stitches” showed real growth for the band from Tin Cans, though could still use some work live, fitting it in.

After those forays, The Morning Benders came “to the dance portion of the night – whereas on that one song, dancing was optional, now, dancing is required” (singer/guitarist Chris Chu).  Talking’s single “Boarded Doors” (a self-professed ‘oldie’) really rose to the occasion, live, with the quiet/loud piece just more infectiously fun.  However, its shine managed to be outshined by the following new track, “Grain of Salt”, thanks to Chu taking off his guitar to both instruct and later lead the audience in the oh-so-simple sing-a-long of “Yea, yea, yeah” to the bright toe-tapper.  Also-new “All Day Day Light” took a more funkified approach, with particularly strong bass, before the band closed out on the poppy, boppy fun of another Tin Cans single, “Waiting For a War”.

California has been giving the world bright pop since the days of The Beach Boys, and today’s indie world is no different, with acts like Princeton (QRO album review – whose twin brother singers do look a bit like Caucasian versions of Chu – QRO photos), The Submarines, and The Morning Benders.  In the process of growing from the outright sixties-sun of Talking Through Tin Cans, their new and old pieces don’t yet perfectly fit together on stage, but the band still shines. 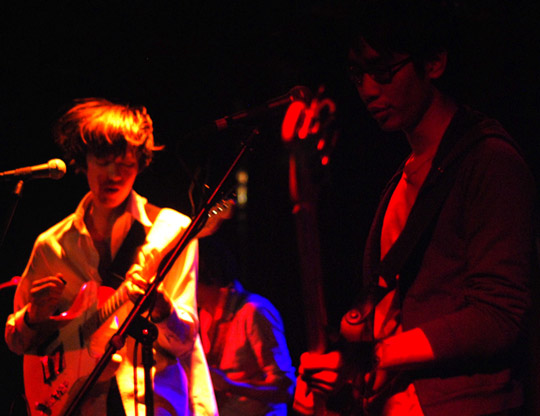 The Pains of Being Pure at Heart : Self-Titled