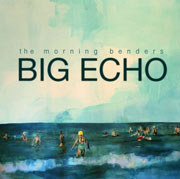 The Morning Benders’ vocalist and founder, Christopher Chu, said in a recent interview that he likes to attack the recording process with a "Phil Spector kind of vibe."  He went on to say that he would just "pile in like 50 people into the studio… and just blow it out."

Welcome to Big Echo – Big sound, Big ideas, Big drums, Big vocals, Big concepts and Big production.  ‘Big’ is a word that encapsulates quite accurately what The Morning Benders were attempting to create with their latest release.  Yet these big ideas don’t entirely manifest on the disc, and this epic sense of idealism unfortunately falls a little flat.

First off let it be said that Big Echo completely trumps anything The Morning Benders have ever done before.  On their debut, Talking Through Tin Cans, the Bay Area outfit only weakly secured a second-tier reputation; their future prospect was far from bright.  After a few years in musical limbo, The Morning Benders were taken under the wing of producer Chris Taylor, who due to the astronomical success of Grizzly Bear’s Veckatimest, who with his newfound Midas touch, turned The Morning Benders very silver career to gold.  But of course there is such thing as too much production, and Big Echo quite possibly falls under that description.  The songs are too tight, too well rehearsed.  There is too much layering and too many effects added to the drums.  The attempt at an emotionally redolent soundscape is far too obvious and ultimately leads to a sound that is contrived and impassive.  Whether it is the fault of an overtly eager producer determined to create the next Veckatimest – or the fault of a sub-par indie band willing to sacrifice their authenticity for a gold record, Big Echo is ‘too much’ in so many different ways.

Click here for photos of The Morning Benders at 2010 Osheaga Music Festival in Montreal, PQ, Canada in the QRO Concert Photo Gallery

Click here for photos of The Morning Benders at Governors Island in New York, NY on June 19th, 2010 in the QRO Concert Photo Gallery

Click here for photos of The Morning Benders at 2009 Music Fest NW in Portland, OR in the QRO Concert Photo Gallery

Click here for photos of The Morning Benders at 2009 SXSW in Austin, TX in the QRO Concert Photo Gallery

Click here for QRO’s review of The Morning Benders at Bell House in Brooklyn, NY on February 11th, 2009

With that said, a few tracks stand out from the otherwise generic mix, "Excuses" being one of them.  "Excuses" is a timeless and melodically enriching achievement that is a fantastic way to start the album.  With an early ‘60s feel, the track sets the tone for an album inspired by the past.  This throwback to a time of innocence and carhops casts a nostalgic shadow over the rest of the record; a shadow none of the other tracks seem to be able to escape from.

And though the rest of the album has difficulty emerging from the shadow cast by "Excuses", there are a handful of songs that almost reach the light of day.  This can be seen especially on the second half of the record, when the band’s Grizzly Bear (QRO live review) influence becomes the clearest.  From the sharp guitar chords that split open "Hand Me Downs", to the multi-layered swooning of "Stitches," and to the hymn-like, gentle vocals on ending track "Sleeping In".  This vast and deep production gives Big Echo a titular double-entendre and fills out the album far more than the rather sparse Talking Through Tin Cans.

Greeted with a faux-gramophone opening, it seems to be pretty clear the band is shooting for a nostalgic affair.  But juxtaposed against this retro feel is a contemporary ambience that perhaps sets The Morning Benders apart from the rest of the crowd that are attempting to replicate a far bygone era.  It’s this contrast between the old and the new that The Morning Benders explore on Big Echo.  Imagine The Jesus & Mary Chain covering "Earth Angel".  Or perhaps think of a post-Beatles John Lennon collaborating with My Bloody Valentine.  The Morning Benders’ highly anticipated sophomore album makes for excellent slow-dance music at a high school prom, but lacks any reasons to keep the listener interested in successive replays.

With Big Echo we see what happens when you "pile in like 50 people into the studio… and just blow it out." – regrettably there is really nothing at all that Spector-ish about the sound The Morning Benders have created.  Yes, there are definitely a lot of people and many instruments, but they never achieve that raw ‘Wall of Sound’, and all the kinks have been smoothed out to a point of boring perfection.  Nothing blows out at all.  It is all pre-ordained and well planned.  Big Echo’s aim for transcendence is so deliberate and palpable, that one has to laugh at the manufactured sentiment of it all.  There is no youthful energy or angst or emotion.  There are hardly any hooks or catchy choruses.  And it is a little disheartening to realize that most of the record is simply an over-produced and dressed-up endeavour, that is over-thought, over-calculated and devoid of individual stamps to set any of it apart.  But one can still have faith in The Bender boys.  They have shown they are capable of vast changes in style and sound, and for their next release one would like to see them strip back and succumb to their instincts – and not a corporate record label.