The Most Serene Republic : …And the Ever Expanding Universe

<img src="http://www.qromag.com/wp-content/uploads/2009/07/themostserenerepublicever.jpg" alt=" " />Brighter days in The Most Serene Republic. ... 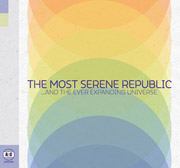 It’s easy to forget how young The Most Serene Republic are.  Their classical training & knowledge of music theory underpins complicated music, despite the band’s classification as indie-rock.  Constantly writing & recording, the new …And the Ever Expanding Universe is their third LP (with three EPs under their belt as well) – but they started at average age of nineteen (and Universe is their first not to be produced in-house, by keyboardist Ryan Lenssen – QRO interview).  One of the first non-Broken Social Scene (QRO spotlight on) associated acts signed to Arts & Crafts (and BSS did lend them producer Dave Newfeld on this one), they came to the Toronto label before its current dominance & consolidation of the Canadian alternative music scene.  Yet MSR is still only in their early-to-mid-twenties.  While this does come out if you see the band live (QRO photos), the seven-person outfit works more like an orchestra than a musical collective such as BSS, albeit putting out indie-rock.  This all makes for some serious swings in their sound, not to mention album-to-album, but Universe finds the band at their most… happy?  Content, at least…

Click here for QRO’s interview with Ryan Lenssen in 2009

Click here for QRO’s interview with Ryan Lenssen in 2007

Click here for photos of The Most Serene Republic at Union Hall in Brooklyn, NY on June 27th, 2009 in the QRO Concert Photo Gallery

Click here for QRO’s review of The Most Serene Republic at Mercury Lounge in New York, NY on March 21st, 2008

Click here for photos of The Most Serene Republic at Mercury Lounge on December 14th, 2007 in the QRO Concert Photo Gallery

Click here for photos of The Most Serene Republic at CMJ 2007 in New York, NY in the QRO Concert Photo Gallery

Click here for QRO’s review of The Most Serene Republic at Maxwell’s in Hoboken, NJ on September 22nd, 2007

Every MSR record is different: debut LP Underwater Cinematographer earned comparisons to indietronica like The Postal Service, while the following Population (QRO review) saw (somewhat lazy) BSS-comparisons (not that the band invited, or even wanted, such name-checks…).  With Universe, the group goes higher, more atmospheric, while retaining the complex, if sometimes disconcerting rhythms that have held them throughout (especially between-Underwater & Population EP, Phages).  That starts with opener “Bubble Reputation”, but reaches its most accessible point with the following “Heavens To Purgatory”.  Not a band that’s easy to grasp on first listen, single-worthy tracks like “Heavens” are natural MSR stand-outs, especially with the nice dueling/dueting vocals from singers Adrian Jewett & Emma Ditchburn.

While Universe could have used more of them, from there the record expands & expands, making it sometimes a little confusing (like with the subsequent “Vessels of a Donor Look”), but the fuzzy atmosphere is both interesting and comforting on such tracks as “The Old Forever New Things” and “Four Humours”, without being overwhelming.  The back half of Universe is particularly bright on songs like “All of One Is the Other” and Fantasia-like instrumental “Patternicity” that comes after.  It is all summed up in sort of ‘tales of the Most Serene Republic’ near the end, with “Catharsis Boo” and “No One Likes a Nihilist” (another one of Jewett’s excellent song titles), separated by the pressing ‘tronic change, “Don’t Hold Back, Feel a Little Longer”.

The Most Serene Republic is not the most easy-to-get band out there, and …And the Ever Expanding Universe doesn’t change that, despite its more inviting tone.  However, they’re also not some inscrutably complex act, the kind that you hate on first and then, upon more spins, begin to get (or at least that’s what music snobs will tell you will happen…).  Their marriage of alternative and classical/complex stands out in that it’s not from some over-the-hill former alt-icon who’s spent too much time in the studio (and not enough on stage), but from seven young Canadians that don’t know how to make music any other way, and wouldn’t want to if they could.