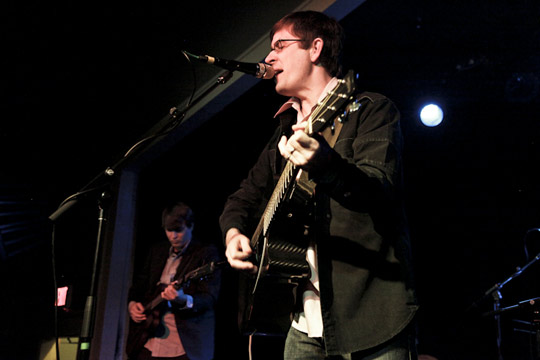 The all ages show at The Wonder Ballroom on the shivery Wednesday night of November 11th in Portland, embraced the youth.  The venue has Verizon text messaging screens where the attendees could text away in amusement for all to see.  For the underage, this was a comparable substitution for alcohol.  For one twelve-year-old, this was her first rock concert.  The majority of the visible crowd looked as if they learned how to utter their first coherent word back when John Darnielle begin performing his songs as The Mountain Goats in 1991.  By the end of the night, it was clear that age had nothing to do with the state of youthfulness. 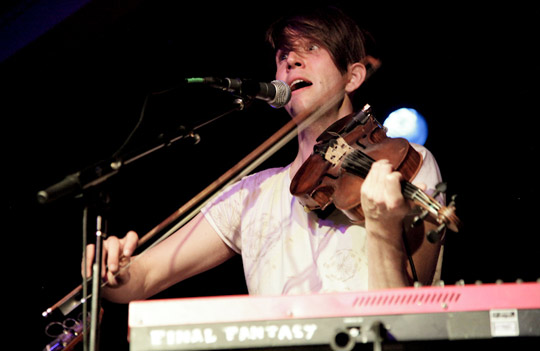 Click here for photos of Final Fantasy at 2009 Pitchfork Music Festival in Chicago, IL in the QRO Concert Photo Gallery

Final Fantasy, the alias for violinist Owen Pallet, seemed an unlikely opener if one did not know that The Mountain Goats’ latest album: The Life Of The World To Come (QRO review), featured Pallet’s string arrangements.  The 30-year-old Canadian looked as if he found a youth potion ten years ago.  Named after the famous video game series, Final Fantasy, the singer/songwriter composes equally epic music that is “flamingly gay”, as he proclaimed in an interview with Time Out.  Pallet has a voice of what you’d imagine to be that of a baroque angel choir; accompanied by his violin played into a loop pedal, he’d have you believe you’re flying through the pastel clouds on the back of a Pegasus.  All the girls and boys watched their magician/musician in adoration, as if he had cast some spell.  The audience wanted to give him a big hug and it was easy to see why.  But this pretty boy is just not pretty on the outside. 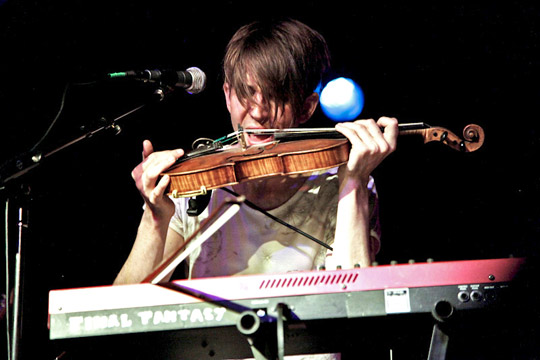 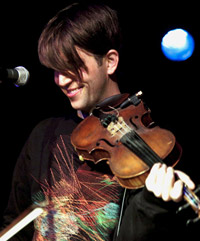 In 2006, Pallet won the first annual Polaris Music Prize – a music award with C$20,000 cash prize for the best Canadian album, based solely on artistic merit.  Uncomfortable with the award’s sponsor, Pallet used the money to help out his favorite bands in need.  When a song from Final Fantasy’s debut album, Has a Good Home, was used in a commercial without his authorization, Pallet donated all the profit to Doctors Without Borders – a humanitarian-aid organization working in war-torn regions and developing countries.  This past summer during Hillside Festival at Guelph Lake in Canada (QRO Festival GuideQRO review), a thunderstorm descended on the stage for a duel with Pallet as he performed “Lewis Takes Off His Shirt” from his forthcoming album, Heartland.  The YouTube video clip shows the stage crew frantically shutting down operation and repeatedly asking Pallet to pull the plug but he continues to sing “…I’m never going to give it to you…” while wielding his bow like a sword. 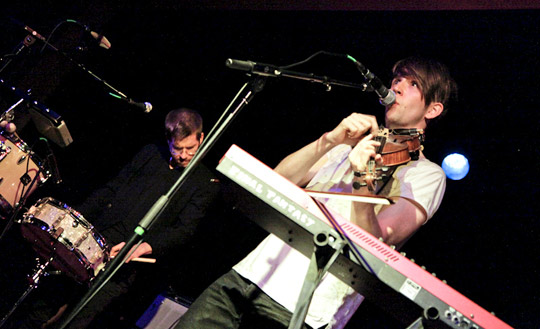 On this night, Final Fantasy did not have to put on his warrior guise.  Everything ran smoothly and on schedule, with help from his accompanist who played the guitar most of time but occasionally handled the percussion and provided backing vocals.  Pallet effortlessly oscillated between his violin and Korg keyboard, all the while making sure the computer was doing its looping duty.  The most excitement came when Pallet took off his top layer, briefly revealing his finely sculpted abs.  The girls hopelessly savored the moment. 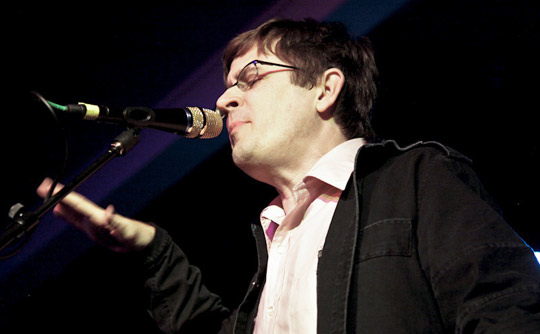 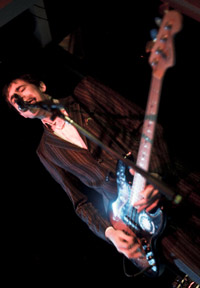 Not sure how many of Darnielle’s friends from his days as a Portlander showed up, but when he entered the stage, the crowd cheered as if their hometown hero had returned on this Veteran’s Day.  But unlike his no-frills adoring audience, Darnielle and his band were dressed up in blazers & suits as if they were appearing on some late night TV show (QRO Indie on Late Night TVQRO review).  Bassist Peter Hughes probably would win the best-dressed award of the night if Entertainment Tonight were here to cover the show.  The silky pinstriped suit perfectly packaged the lanky Hughes, who occasionally emerged from the dark, left of the stage, to let the crowd know the mutual pleasure of this rendezvous.  Hidden from his drum set, Jon Wurster’s face surfaced when he’d hit the cymbals.  The guitarist, who must be a new addition to the band for touring purpose, stood on the far right side of the stage, accepting his supporting role for the linchpin of The Mountain Goats, John Darnielle. 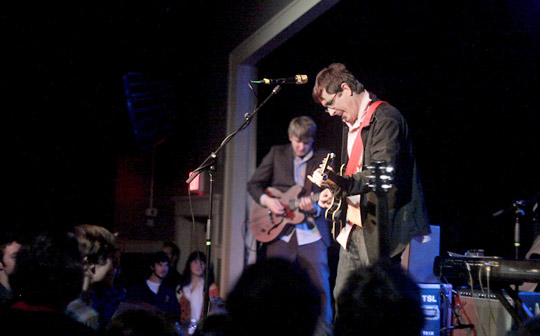 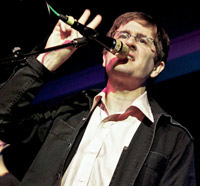 Considered by several critics as one of the best songwriters, Darnielle prioritizes lyrics over music.  He is essentially a storyteller and the audience seemed more interested in what he had to say than how the music affected them.  Unlike some songwriters, like Steve Kilbey of The Church, who loathes explaining his lyrics, Darnielle serves them up on a silver platter, usually with a side of humor.  For “Thank You Mario, But Our Princess Is In Another Castle”, Darnielle introduced it as a song about a little fellow who goes on a mission to save his princess by defeating the evil dragon but he ended up saving a friend who he didn’t even know was missing.  And so on.  Before each song, Darnielle tickled the crowd.

The Mountain Goats playing “This Year” live at Wonder Ballroom in Portland, OR on November 11th, 2009: 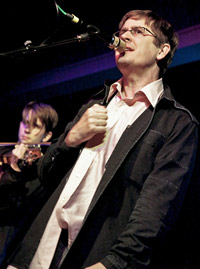 Almost mid-way through the set, after rocking as much as the folk-tinged rock band could, Darnielle’s support cleared the stage for the Darnielle-Pallet show.  The first guest of the night was a new song about Portland, “Steel Smoked Fish”, a recollection of Darnielle’s short residency.  Portlanders loved hearing anything and everything the storyteller had to say about their beloved city.

One of the highlights of the show came from 1994’s Zopilote Machine LP: “Going to Bristol”.  The lo-fi recording was transformed into an uplifting dance number when Pallet’s violin replaced the original guitar composition.  Darnielle responded, “I am not afraid to dance in this town” when a young man shouted, “Shake it!”  He bounced around and swung his hips, singing nasally to the melody of Pallet’s violin.  The crowd cheered and screamed as if everyone was all on same drugs, experiencing the same euphoria. 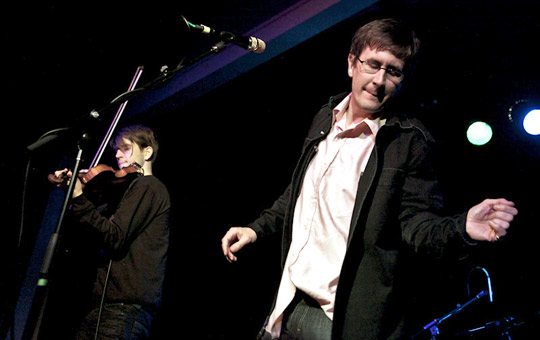 For encore, The Mountain Goats thundered for “Psalms 40:2”, preceded by Darnielle’s explanation: “Couple of guys get on Interstate 35 – don’t know where they are going but I know what they do…  It’s awesome if you have no morals.”

The animated singer announced that they only have one more because his voice was dying.  He closed with “Love, Love, Love”, which seemed a fitting summary of the night and parting gift to his audience. 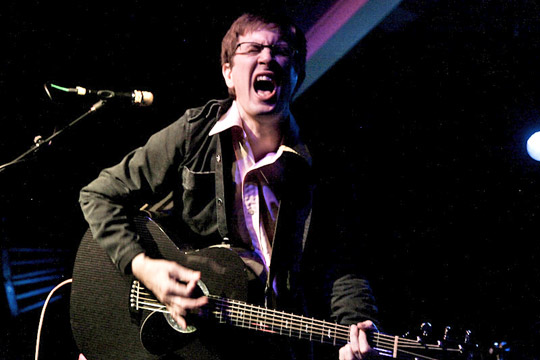 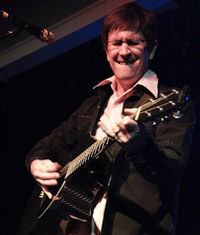 The set lasted about 80 minutes, including Darnielle‘s stage banters that probably added up to at least ten.  18 songs were plucked from The Mountain Goats’ catalogue of 17 albums and numerous singles/EP.  Five of the songs were from their latest albums, which are all named after Biblical passages.  But enough has been written about songs that are more famous for their titles than the actual content.  If some people thought that Darnielle was having a mid-life crisis about the meaning of life and all the baggage that comes with it, he certainly proved them wrong.  Darnielle confidently accepted his role as the chosen leader by the Wonder Ballroom crowd to lead them to an evolution of honest songs without limits.  But then this is an observation from someone who couldn’t name one song by The Mountain Goats before the concert.