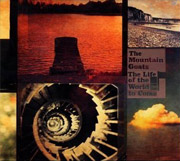 The indie-world is well-stocked with hyper-literate songwriters, such as Colin Meloy of The Decemberists (QRO album review) or Sufjan Stevens (QRO live review), but The Mountain Goats’ prolific John Darnielle still stands out, and The Life of the World To Come only makes that more so.  Each track is inspired by (and named after) a verse of the Bible, and after going grander with last year’s Heretic Pride (QRO review), he returns to a more stripped sound.  However, that does point out Darnielle’s major flaw: he can be too literate.

Actually, if someone told you the new Mountain Goats album was a more stripped affair, you may well assume it’s major flaw would be Darnielle’s approaching-nasal voice, but that actually seems to have been toned down on The Life.  Instead, it his storytelling nature, given holy fuel, which goes into overdrive, while the rest of his instrumentation is often reduced to background music at best.

This isn’t always the case, however.  The push to Darnielle’s voice and guitar certainly make "Psalms 40 : 2" more forceful, and the following "Genesis 3 : 23" has just the right amount of storytelling, heart, and catch.  And when Darnielle makes more interesting songs, the characters & stories in them are more interesting as well.  But when he reduces, it can be hard to keep on wanting to follow along.

The ‘each track inspired by a verse of the Bible’ idea can sound like a gimmick, cribbed from the success of Sufjan Stevens’ albums about states, or The Decemberists’ latest record, drawn from a folk-revivalist’s EP, but other than when looking at the track listing, it isn’t particularly noticeable – and The Life of the World To Come did get John Darnielle onto The Colbert Report (QRO Indie on Late Night TV – which seriously out-classes The Daily Show in indie-rock terms, ever since mock-pundit Stephen Colbert started a mock-feud with The Decemberists…).  But when his hyper-literacy is combined with little else, it can be tough reading.

Mission of Burma : The Sound, The Speed, The Light