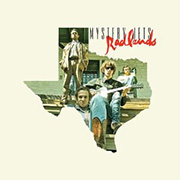 There is no doubt that Radlands marks a new direction for Mystery Jets.  It is different to everything they’ve done before and it’s also been the last album with Kai Fish as a bassist.  Since moving out from London and travelling all the way to Austin in Texas, the band has maneuvered away from their quintessentially English indie sound to more of a country/folk Americana.  And it works brilliantly for them, providing variety of melodies and harmonies, a creative storytelling, with American landscapes breaking through the music.

The main character on this concept composition is the Emerson Lonestar, whose life doesn’t exactly plan out as he had hoped.  With the eerie romantic drama developing we find out all about his miserable choice in women as he falls for a prostitute and a nun.  All that accompanied by blues-infused guitars, cascading growling vocals, with few elements of despondent confessions of the protagonist.

Click here for QRO’s review of The Mystery Jets at Brudenell Social Club in Leeds, U.K. on March 28th, 2012

Click here for photos of The Mystery Jets at 2011 Bingley Music Live in Bradford, U.K. in the QRO Concert Photo Gallery

The opener, "Radlands", begins with a soft melody developing more and more as the time passes.  Lyrics tell a story of two lovers looking for redemption.  Yet there is no time to feel sorry for them – the chanting chorus comes along pretty quickly.  As we move on to "You Had Me At Hello", it’s pretty obvious that is a toxic, dangerous love as Blaine sings "I want you to love me as if you’ve got no principles," and it doesn’t take long before he starts second-guessing himself, looking for salvation and protection in "Someone Purer".  The latter marks somehow a slow break from the reverb guitars, at least until we get to the song’s crescendo full of exuberant chants.

Moving aside from the romance, "The Ballad of Emerson Lonestar" focuses mainly on the Lonestar himself, with the retro style, built on fingerpicking and slide guitar sound.  "How far do I have to wander before the dream is mine?" wonders Blaine implying that the life of Mr. Lonestar is not an easy one.

The album is a combination of nearly everything, from folky tunes to disco ones, from indie groove to psychedelic overtones.  "Oh dear Father, where do I begin?" asks rhetorically Lonestar through Blaine’s vocals on "The Nothing".  His flaws and sins, and despondent character are reflected in the slow-paced music.

Finally a woman gets to speak for herself with through Sophie Rose’s voice in yet another love song with a gentle melody floating along in the background emphasizing the duo’s vocals.  Despite the whole album being a one massive giddy romantic story, the music varies in tones and harmonies so that the sound keeps fresh and exciting.

"Sister Everett" brings us back to a woozy and groovy territory with the Lonestar falling in love with a missionary, who later on breaks his heart.  However he doesn’t seem to have any regrets, wearing his heart on the sleeve once more and saying "Take me to the edge / I’m not scared / And if we fall off it doesn’t matter / We’ll do it all again" in "Lost in Austin".  Here, the American old-fashioned lifestyle, the open-road landscapes break through the music even more aggressively, as if saying the story could not have happened anywhere else in the world but in Texas.

As the record draws to a close with a sentimental "Luminescence" the chanting eases out and all we are left with are an acoustic guitar and a beautiful, heartbroken reflection on the story we’ve witnessed.  "Yes it feels good but not half as it would, had you stayed…" means that even though it’s a history now, it’s been a valuable lesson and unforgettable memory.

And so is this record, oozing with confidence, intense melodies, touching lyrics about daunting love.  It’s honest, heart-warming but also rough and somehow raw, which is a compliment in an over-produced music business.  One thing is sure: Radlands has been a pleasant surprise.

Of Monsters and Men : My Head Is an Animal