<img src="http://www.qromag.com/wp-content/uploads/2009/01/thenakedheartstheseknees.jpg" alt=" " />Amy Cooper and Noah Wheeler combine a lot on their debut as The Naked Hearts,<em> These Knees EP</em>.<br />... 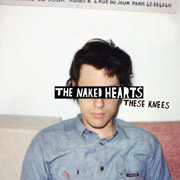 Solo artist Amy Cooper (also previously of Rubies) teamed up with Noah Wheeler only last year, but their first release as The Naked Hearts, These Knees EP, has the depth of an act that’s been together for far longer.  The New York City duo nicely combine alt-country, haunting echo, indie-rock, and more on their debut.

Cooper & Wheeler do more than one thing well on These Knees: while “Crashing Horses” has a very interesting echo sustain to its timber, the preceding “One False Move” is a bigger attack, and yet effective.  Echo is something used a lot of Knees, from laying atop some somewhat simplistic alt-country on opener “Cat & Mouse” to getting a little synth-poppy with Cooper’s vocals on finisher “Only For You”.  “Call Me” doesn’t perfectly match up the haunt and twang, but the following “No One Nothing” is a sad, sweet strum with catch that gets bigger & better at its end (leading nicely into “One False Move”).

A bit hard to pin down genre-wise, The Naked Hearts flourish in that ambiguity.  While These Knees is only a self-released, digital EP, good things should be coming from this pair.