The Nerd Parade : Span of a Life 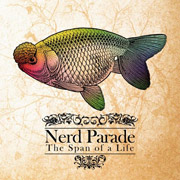 In 2007, Miami’s Randy Garcia put together A Delicate Bashing (QRO review), as leader of The Nerd Parade.  Reaching all over the place, Bashing was an accomplished collection of indietronica, diva, country, disco, and more.  For the follow-up, Garcia has pulled things together a little bit on Span of a Life, making for a record curiously both less ambitious and more.

Whereas Bashing felt like a crazy paella, Span is definitely a record meant to be listened to from start-to-finish.  But records like that are actually quite varied (think Pink Floyd’s The Wall, or Hüsker Dü’s Zen Arcade), because if all the pieces sounded similar, listening beginning-to-end would only reveal that one-note fact.  Thankfully, The Nerd Parade still keep a lot of different things in the mix, but most notable on the new record is the shift towards guitar-jam.  From the founder of electronica label NoPhi, it’s rather surprising that Garcia has moved to the axe-jam, but that is a style that lends itself to stretching without breaking, musically.

And Garcia has kept the best aspect of Bashing, singer Abby Wren’s diva-like voice.  If anything, it feels more prominent on Span, from the catchy & brightening “Circles (Love Eternal)” to the following sad, carrying epic “We Are Not Sleeping”.  There’s also the diva-press “Yr Drunken Holiday” near the end, and the straight-out funk-jam “Yay, Yeah, Uh-huh!” – a piece has to be pretty enjoyable to pull off that title, and The Nerd Parade can.

Sometimes, the jam gets too much on Span, like the instrumental jams “Sixty-Eight Reasons” and “The Rockness Monster” (though the latter is an awesome name…).  And “One Million Wooden Acres” seems to exceed that, only to feel a little indulgent with the guitar solo.  But then there’s the surf guitar-meets-southwestern epic (guess that would be Baja California…) “Dead Air & Denial”, which nicely throws into a story-jam.

The only really indietronica piece on Span of a Life is closer “Imagineland”, a dark coda with memorable melody.  Shifting to the guitar-jam has given The Nerd Parade a bit more cohesion, if taken a little too far that way and away from the neat ‘tronic effects of A Delicate Bashing.  And it’s still accomplishment, across it’s whole Span.