<img src="http://www.qromag.com/wp-content/uploads/2010/07/thenicobluesblamethebore.jpg" alt=" " />If an artist, or a band like the Nico Blues summons the inner motivation to put together a song, or a whole album of songs,... 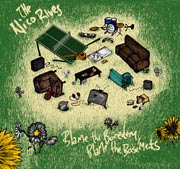 ‘Relevance’ is a half-joking buzzword making the rounds of music criticism lately.  Maybe no one makes better deflationary use of its pretentious connotation than the writer behind the Alt Report.  Sample zingers could be: "Was Kanye West’s Soft Porn Denim Photo Shoot with a Bald Chick Relevant?", "Are Unchill AZN Bros Relevant?", etc.  It all adds up to one big joke on the so-called ‘tastemakers’ in the music scene who have the gumption to try to affect the shape of the music scene with words, promotional campaigns, and straight-up posturing instead of songs.  If an artist, or a band like the Nico Blues summons the inner motivation to put together a song, or a whole album of songs, what right does anyone have to rate its relevance to the music scene?

Well, no one has the right, really.  But we go ahead and do it anyway because people always have opinions and sometimes those people blog them.  The Nico Blues’ new album Blame the Boredom, Blame the Basement is a decently recorded essay into ‘90s grunge rock that is almost completely out of place in 2010.  That’s an opinion.  You could look for support in the Soul Asylum (QRO photos) vocals; the one-trick grunge distortion, alternating with the clean acoustic strums; the Goo Goo Dolls songwriting; the ‘allusion’ to Pearl Jam (QRO live review) with the "this is not for you" lyric in "Unprofessional"; the general Ugly Kid Joe-ness of the entire Blame, Blame affair.  Some of this is forgivable; the Nico Blues are Jersey kids, and the Garden State always smacks of a certain Boss (QRO live review)-ness, a working class aesthetic that amounts to a charming philistinism.  Look at the popularity of the Jersey Shore; DJ Pauly D. and his bad early ‘90s techno are actually getting gigs these days.  Yes, it’s half in jest, but there’s still something comforting in the (mistaken) notion that music and culture peaked before the millennium and hasn’t changed since.  It has changed though.  Unless you have a really strong sense of nostalgia, Blame, Blame isn’t worth your time.

It’s hard to say sometimes whether an artist is alluding to the past, or is just stuck in the past.  The ‘tastemakers’ [shudder] have to make a judgment call.  Without pointing to any specific piece of evidence, Blame, Blame feels stuck in the past.  The album feels irrelevant [shudder].  Kind of like the distinction between erotic art and pornography: you recognize it when you see it.  The Nico Blues are a competent bar band to enjoy while drinking domestic brews; they would probably "blow your doors clean off" in a live gig.  Blame, Blame is a nice business card to get local club gigs.  That’s about it, and in the grand scheme of things that’s not such a bad thing.