<img src="http://www.qromag.com/wp-content/uploads/2009/07/thepainsofbeingjuly10sm.jpg" alt=" " />The Pains of Being Pure at Heart stepped up their game outdoors at South Street Seaport. ... 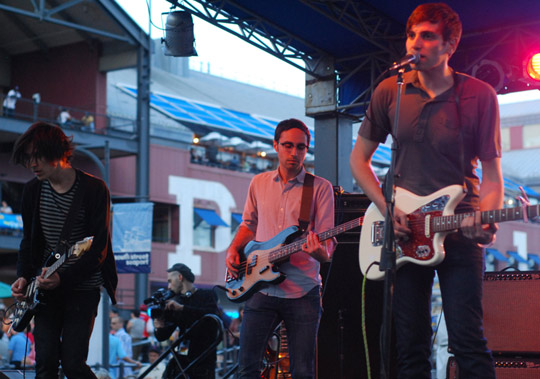 Click here for photos of The Pains of Being Pure at Heart at the Pitchfork Music Festival on Chicago, IL on July 18th, 2009 in the QRO Concert Photo Gallery

In the last year or two, Brooklyn has been putting out a ton of alt-garage/pop, and a lot of it has been ending up on downtown Manhattan’s South Street Seaport (QRO venue review).  Crystal Stilts (QRO album review) opened a show there last year (QRO photos), Vivian Girls (QRO album review) played there (QRO photos) during the East Village Radio Music Festival (QRO recap) in September, and on Friday, July 10th, The Pains of Being Pure at Heart headlined the Seaport for River-to-River Festival.  And even if you’re sick of this latest wave outta Brooklyn, Pains played a show you had to enjoy. 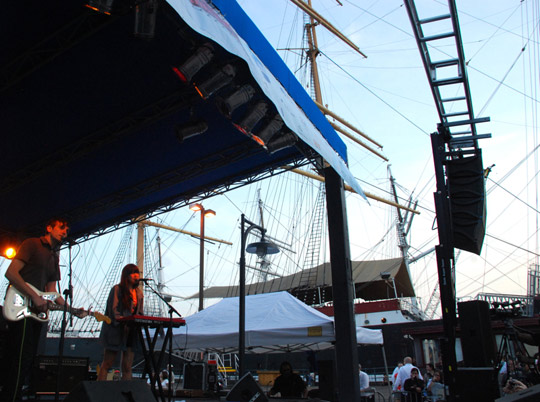 The band, already in possession of a terrible name, have managed to compound that by releasing a self-titled EP in 2007, and a self-titled LP earlier this year (QRO review) – they’ve even got a song titled “The Pains of Being Pure at Heart”, though it didn’t make the jump from EP to LP [note: this all occurred before Wilco put out Wilco (The Album) – – which was led off by “Wilco (The Song)”…].  While sweet & enjoyable, the band’s eponymous LP could feel a little thin at times – a fate suffered by a lot of the Brooklyn alt-garage/pop bands.  But live at South Street Seaport, Pains took pretty much every song up a notch, by injecting energy and skill. 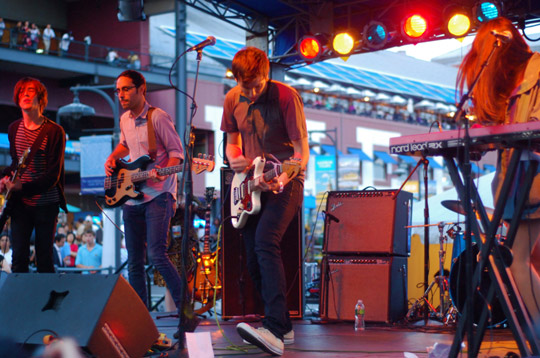 Right from the start with the EP’s “Doing All the Things That Wouldn’t Make Your Parents Proud” [note: Pains also isn’t one of those bands that have really long song titles, like Los Campesinos! – QRO spotlight on – or Sunset Rubdown – QRO live review], the band was strong.  South Street Seaport is a venue that favors expansive sounds, given the outdoor, on the water setting, and Pains brought that from top-to-bottom, but didn’t lose their enjoyable charm.  They even hit up a couple of new songs, “10’s” and “Higher Than the Stars”, which saw them go even, well, higher. 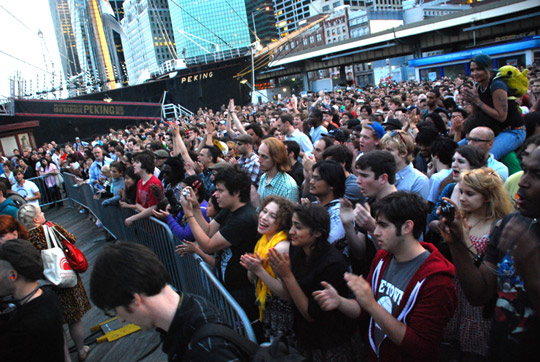 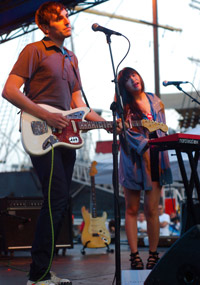 Singer/guitarist Kip Berman thanked everyone for showing up, and joked that, since they’d been in Denmark on the Fourth of July, they were celebrating that Americanest of holidays today.  When he or singer/keyboardist Peggy Wang talked, they seemed a bit nervous – who wouldn’t be, playing to such a large crowd? – but their performance certainly didn’t show it.  The crowd was unsurprisingly young, and didn’t know if the band was allowed to do an encore – they were, with “Gentle Sons” – but cheery without being über-cute (there was one super-psyched girl up front – QRO photo – and another girl did climb on someone’s shoulders – QRO photo – which security actually didn’t have a problem with…).  The Pains of Being Pure at Heart’s next gig (QRO event listing) is headlining the large Webster Hall (QRO venue review), and now they’re sporting the Seaport Music seal of approval…

The Pains of Being Pure at Heart playing "Gentle Sons" live at South Street Seaport in New York, NY on July 10th, 2009: 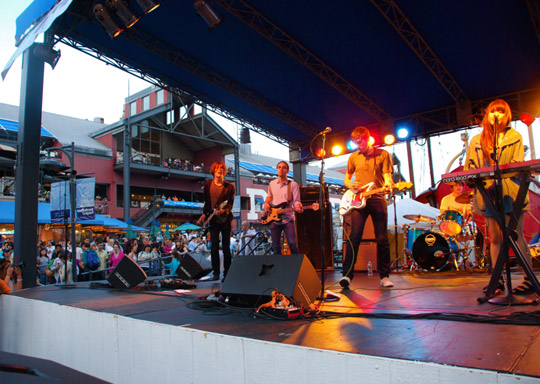