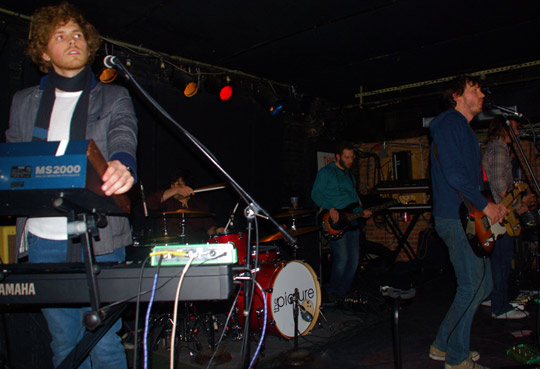 Click here for photos of The Picture at Piano's in New York, NY on December 2nd, 2008 in the QRO Concert Photo Gallery

The band was celebrating the release of their new EP, Bluebirds (QRO review), but it was still a shock to see a line outside the door to Mercury (with some relatively pushy behavior from some frigid fans, mostly females).  The long front bar was as tight as a drum with people, making it a tough trip to get to the door to the stage floor in the back (and forget about going back for a drink…).  Pressed right up to the lip of the stage long before The Picture went on, the crowd was an unusual mix of folks, older than your usual NYC hipster crowd, but running from skinny scenesters to fraternity/sorority types.

However, that mix of slightly more mature fans is a fit for The Picture’s more mature sound, which harkens back to the more emotional alternative rock of the nineties (before that had been shrunk – in every way – to ‘emo’…).  Bluebirds showed off that sound, and the band did likewise on stage, playing each of its seven tracks in pseudo-order, starting with EP openers “Another Army” and “The Shadows”.  “Army” is great on record, and was similarly great live, but it was “The Shadows” and especially the following “Samantha and Her Friend” which took real steps up at Mercury.  The two pieces are more restrained on Bluebirds, but live, The Picture put a killer amount of energy into them, from singer/guitarist Robert Abel’s vocals to lead guitarist Chris Ruckle (who was on keyboards for “Army”, before switching to guitar with Robert’s brother Greg for the rest of the set) crashing in effort.

That energy continued with the grander “Battling Giants”, but then the band slowed things down with “Tucked In Corners”.  Not a live staple, but the favorite of bassist Jake Siegler, the sad strum stayed somber and beautiful when live, providing a bit of a refreshing breather before Bluebirds’s standout single “Deer Crossing”.  Robert Abel took up keys from his brother; along with Ruckle, Greg Abel really kicks the great track up a notch with their backing vocals, including “Don’t stop running!”  Greg-sung “Devious”, the finisher of Bluebirds and the b-side to the “Deer Crossing” single (which the band has been known to hand out for free at shows), is something of a simmer-downer to end the set.

But the crowd was having none of that, meaning The Picture had to stay on stage (couldn’t wade through the audience to get to Mercury’s backstage anyway…).  Having played all of Bluebirds, the band hit up some older numbers, “retro-Picture”.  “Rise” had some high fuzz and emotion, but you could see that the band had grown from it.  The following “Arrested” was sadder and softer (Robert Abel even joking that the crowd could talk over it), but it was the encore’s closer, “Blind Side”, that brought in the light.  Its sweeter beauty was expansive, but also grew emotionally to finish out the evening.  It was still a difficult squeeze to make it to the bar, the merch table, or back out into the night, but The Picture more than earned it.

The Picture playing "Blind Side" live at Mercury Lounge in New York, NY on January 24th, 2009: