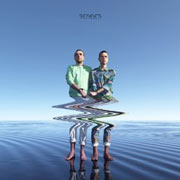 There are no surprises here: a handful of catchy, potential hits and an equal dose of full-fledged fillers.  Sometimes it seems The Presets would be more suited to releasing EPs.  The Australian electro-house duo kick-off Pacifica remarkably with singles, the pulsating "Youth in Trouble" and modern sea-shanty "Ghosts".  Yet, what follows is a maelstrom of predictable house beats and bass modulations.

As with their previous records, Beams (2005) and Apocalypso (2008 – QRO review), the lyrical subject matter is typical of the genre, and subsequently dull – "I had the wildest dream / Was none too subtle" or "Lost my mind in the streets of neon / Cocaine, song and women and wine".  Nonetheless, The Presets are devoted to fun, not poeticism, in the form of modern, urban anthems; there is no doubt that the music is far superior to the words.  One of the strengths of this album is its tonal vibrancy, which conjures images of lit-up cityscapes embroidered by bustling streets.  Inevitably, the record takes you deeper within those streets, to the clubs where the tracks of Pacifica will undoubtedly make their home in the coming months.

Songs such as the immensely huge "Fall", the sparse Air-like "It’s Cool", and the closing beauty "Fail Epic", capture this atmosphere best.  All are rich, distinct examples of modern electro in its various styles, and serve to dispel house-haters’ claims that the genre is defined by musical monotony.  As for the rest of Pacifica, aside from the refreshing Australian-ness of Julian Hamilton’s voice on "A.O.", a welcome break from his Rick Astley-esque vocal flamboyancy, there is little else that stands out.  In that sense, Pacifica is a hit and miss album; half the tracks are memorable and half are not.  Indeed, a Best of the Presets would be a pumping good compilation.