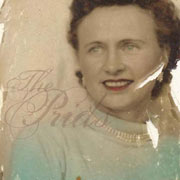 Nearly two years after a serious highway accident that could have ended the band, The Prids make a triumphant return with their new full-length release Chronosynclastic (Velvet Blue Music).  The Prids have a compelling history of overcoming the odds while continuing to make great music.  In fact, they should have their own Behind The Music episode.  Here’s the short version: founded in St. Joseph, Missouri in 1995 by David Frederickson and Mistina La Fave; Frederickson and La Fave marry, divorce and remain roommates as well as band-mates; move to Portland, OR; release nine singles, EPs and albums; due to a blown-out tire while driving from San Francisco to Los Angeles their van rolls multiple times severely injuring everyone and destroying their equipment and van; devoted fans raise more than $16,000 for medical bills, equipment and a van; and seemingly from the wreckage they return with their first full-length release in four years.

On Chronosynclastic, Frederickson (guitars/vocals), La Fave (bass/vocals), Maile Arruda (keys) and Lee Zeman (drums) continue to mine the depths of their melodically dark template.  What really sets them apart from contemporaries like The Cinematics (QRO album review) or Interpol (QRO album review) is the male/female vocal interplay.  La Fave’s voice adds a touch of sweetness to the songs, not unlike Hope Sandoval (QRO album review) with Jesus and Mary Chain.  And that sweetness delivers some heartbreaking lyrics that are enveloped in a dramatically sweeping sound.

"Hide Your Thoughts" opens Chronosynclastic with guitar that has a distinct shoegaze feel.  Arruda’s atmospheric keyboards soar as Frederickson and La Fave sing great lines like, "Touch you until it hurts my hands."  On "Waste Our Time", Zeman lays down a tight groove that the rest of the band locks into.  A standout here is La Fave’s voice.  When she sings, "Raise up your hands / Hold them high / Or die where you stand," listen for her subtle vibrato on the word "stand."  She nearly sounds like Siouxsie Sioux and it’s these little things that make you listen intently to their music.

"Break" sounds like Head On The Door-era Cure morphing into My Bloody Valentine.  The uh-huhs and yeahs set up some great lines like, "Spending my life getting good at goodbye."  Frederickson takes sole vocal duty on "Desolate", a somber song with guest Ryan Lynn on lap-steel.  The highlight of Chronosynclastic is "I’ll Wait".  Arruda’s Cure-like keys and Zeman’s perfectly simple percussion lay a beautiful platform for Frederickson and La Fave vocals.  This song really shows how great their singing works together.

Built to Spill’s (QRO photos) Doug Martsch guests on "In The Fall", another pretty song that you wish lasted longer than just barely two minutes.  Chronosynclastic closes with "Tonight, October".  Sounding a bit like Slowdive with lap-steel guitar, they sing, "Dreaming my life away," and for a moment it feels like all the difficulties they’ve had in the past never happened.  Then again, it’s those things that have shaped The Prids, made them survivors in so many ways, and perhaps Chronosynclastic will bring them the wider recognition they deserve.

The Prids Chronosynclastic U.S. tour begins June 11th in their hometown of Portland, OR.