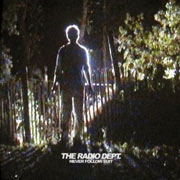 If you’ve been following The Radio Dept. over the years, you’ve probably noticed that their gear has gradually shifted from the fuzzy distortions of My Bloody Valentine, to the dub-beat based pop electronica of Saint Etienne (the Swedish band never liked to be labeled as shoegaze anyway).  No matter which influence may be in the driver’s seat, fans can count on elements of dreaminess from the trio – which can also be a pitfall.  Dissecting their compositions, there isn’t much diversity, but somehow, The Radio Dept. always manages to escape the banal.

Never Follow Suit is a testament to The Radio Dept.’s resourcefulness.  There isn’t actually a ‘new’ song on the third singles EP from Cling To a Scheme (QRO review); every arrangement recycles elements from the title track.  "The One" is like a child of "Never Follow Suit".  With similar chords set to slightly slow-downed beats of its paternal composition, it doesn’t develop fully as a song, but rather serve as a prologue, seamlessly transforming into the main event.  If one song could encapsulate the motto of The Radio Dept., "Never Follow Suit" would be its best candidate.  This is a band that likes to have a total control and freedom, and could give a crap about nabbing commercial success.  Incorporating an audio excerpt from the eighties documentary on NYC graffiti and hip hop subculture, Style Wars: "It’s for me, it’s not for nobody else to see / I don’t care about nobody else seeing it / All these other people who don’t write / They’re excluded / I don’t care about them / They don’t matter to me / It’s for us / It’s for us,"  "Never Follow Suit" is the band’s unofficial anthem.  But this ‘non-conformism’ probably has more to do with their propensity for boredom, rather than an embracement of the "indie attitude".  In an interview with The Line Of Best Fit earlier this year, frontman Johan Duncanson stated, "We like short records, singles, EPs, short albums, short shows.  Short is a key word."  With that kind of attitude, how did The Radio Dept. sustain their distinguishable dream pop sound for almost a decade?

Rest of the Never Follow Suit plays out with its shortest and longest track.  The jangly instrumental piece, "Stay Off Route", morphs into "On Your Side", which reprocesses the lyrics and the melody from "Never Follow Suit", with Balearic beat influence.  The 8:16 dub version of the title track, "Never Swallow Fruit", concludes the EP.  Deviating from the stylistic flow of the preceding numbers, the mechanically hollow, chill-wave remix by Pistol Disco overshadows The Radio Dept.’s ethereal warmth, enveloped in swooshes and drones.  Other than for the justification of amusement, and spinning at dance clubs, this trend of bands remixing each other’s work seems to be not much more than an exercise on how to kill time, while waiting for their creative spark.

Though Never Follow Suit may not be the most engaging package for a casual listener, one has to appreciate their ingenuity for making the most out of a single track.  For the fans, the limited edition 12" vinyl version would be a nice addition to their collection.  Everyone else, you can skip the EP, but make sure to download the full album, Cling To a Scheme, to your iTunes.