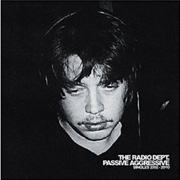 For some, the music of The Radio Dept. may transport them to the halcyon summer days with its airy, sweet harmonies.  But for those of us who feel a more visceral connection with their music, understand that these pretty songs are not just made of fragrant petals, but come with thorns.  And those thorns have been getting sharper and longer over the years, as disenchantment leads to resentment.  Lead singer and main lyricist Johan Duncanson has become the unlikely, and unintentional hero for the ones who put up with BS of the world.  Voice for the people who desire a place where they don’t find themselves mumbling complaints under their breadth about the hypocritical government, the ridiculous idolization of ‘stars’ fueled by media, and the pressure to ‘follow a suit’ – in order to be accepted or sometimes – just to get by.  The culture that highlights the winners and losers, prompting some of us to hide behind the facades – drowning of the individual identity replaced by brand marketing – which well may lead to a passive aggressive behavior.  This is the same society that likes to pigeonhole The Radio Dept. with other Swedish groups – as if it were a part of some propaganda.  If such indignant subtext were translated musically, their melodic tunes would not be so effective.  Paired with music that feels like the sun on a coldest winter’s day – exuding a feeling of kindness and empathy, Duncanson’s ethereal vocals may keep you from unearthing the anger and paranoia brooding in the songs.  Thus, we find solace from this perplexing world through paradox.

Click here for QRO’s interview with The Radio Dept.

Click here for QRO’s review of The Radio Dept. at Doug Fir Lounge in Portland, OR on February 13th, 2011

Disc one of Passive Aggressive is exactly what it claims – a singles collection – releases from The Radio Dept.’s 3 LPs, numerous singles EPs.  But never the one for the convention, the band thought it would be nice to throw in a second disc of B-sides and rarities.  While the A-side may highlight the past decade of The Radio Dept.’s career, from their more distorted and lo-fi days of Lesser Matters to the more polished, electronic Balearic beat influenced Clinging To a Scheme (QRO review); the inclusion of the second disc is critical to showcasing the band’s oeuvre.  Knowing that the same authors, who created these exquisite pop songs, had full control over the whole package, down to the darkest shade of gray on the cover art, reassures their audience of certain directness and honesty of the product.  The front image of Passive Aggressive just may be Duncanson’s best work to date.  With the help from a Xerox machine he received as a gift, the lithe frontman played around with the photo of his bandmate, Martin Carlberg, to his perfectionist satisfaction.  The disengaged, apathetic (or intoxicated) portrait of the guitarist/bassist with a pair of headphones in grayscale image, perfectly encapsulates the album title, without being over the top.

Listening to PA, one can imagine The Radio Dept.’s playlists subconsciously influencing the songs throughout the years.  "This Past Week" (Belle & Sebastian), "Liebling" (My Bloody Valentine), "The Worst Taste in Music" (Pet Shop Boys), the remake of Sade’s "All About Our Love" takes cue from The New Kids On the Block’s beats.  Lover’s rock (reggae love songs) and dub beats have crept up in the latest album, especially prominent on "Never Follow Suit".  While the newest single that tried to influence the Swedish election, "The New Improved Hypocrisy", reverts to the new-wave flavor of their Pet Grief period.  Couple of years later from their 2006 LP, The Radio Dept. are still stuck in the synth-pop era with their remake of The Go-Between’s "Bachelor Kisses" – a very wet version with heavy reverbs, sounding more influenced by OMD, than the Australian folk-pop outfit.  While Duncanson’s vocals may reach higher notes, it lacks the organic yearning of the late Grant McLennan.  Listening to some of their earlier songs like "Ewan" (mispronunciation of ‘Johan’ by his relative during his childhood spent in Scotland) and "Where Damage Isn’t Already Done", the drum set (instead of a drum machine) would be a welcoming prospect for the future.

For the second disc of PA, it would have been nice for the fans, if it really were a true collection of rarities.  Not sure if anyone really knows how many songs The Radio Dept. has actually produced.  Several tracks float around the Internet with obscure information to obtain the mp3s.  For example, the wistful "The Hide Away" and "Lean Back, Lean Forward" would have eased collector’s woes.  But the ideal here is about how The Radio Dept. would like us to perceive them, and not about compiling odds and ends of their catalog.  One particular track that has had a long history is "Messy Enough", which has been in existence since the band’s early days – when Duncanson was involved in a project under the moniker of ‘pophitler’, and evolved throughout the years through live performances, before it was included as a B-side for "David" single EP in 2009.  The most important aspect of the second disc is the inclusion of instrumentals.  "Mad About the Boy", "Tåget", "Slottet", and "The Idle Urban Contemporaries" demonstrate the trio’s ability to carry a tune without the aid of lyrical visualization (though lyrics have not always been their forte) or Duncanson’s dreamy vocals.

In the end, we are truly getting The Radio Dept. of the past decade through their intellect, and not through the notions of media or the audience.  Passive Aggressive will likely satisfy your auditory experience, no matter how you perceive The Radio Dept.