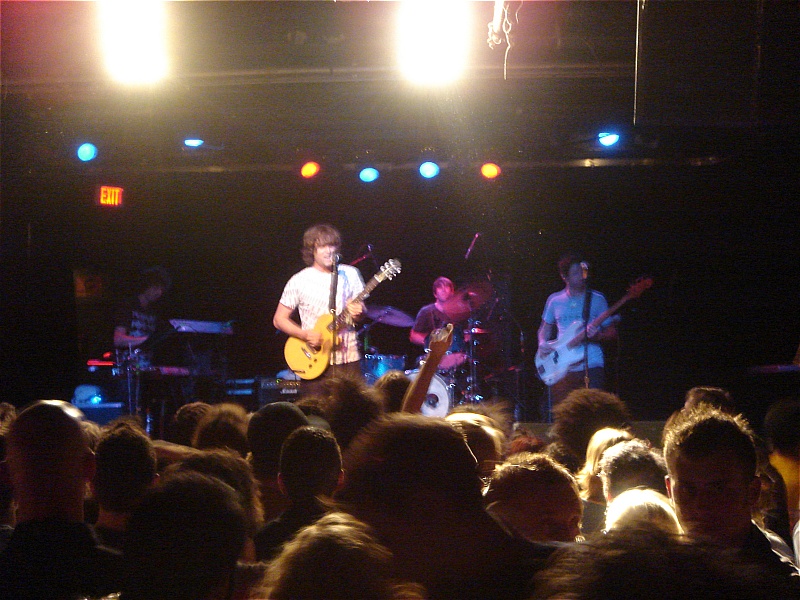 Fresh off of two nights in NYC, The Rapture hit Boston for the first time in a couple years, and despite not selling the place out for some inexplicable reason, they blew the minds of most people there, and turned Axis into a old-fashioned dancefest.  No shortage of energy from the band or crowd on this night, and most people left some degree of sweaty.  The Rapture’s setlist was as good as it could possibly be – every tune hit the mark.  From beginning to end, the show was exciting, spine-rattling, and bootie-shaking, and The Rapture are possibly the best indie act out there to see if you can move your ass.

Starting off with "Heaven", the band sent a clear message that there would be a fun time had by all.  Druzzi’s kickass sax and Rocco’s badass beats completely set it off from the start.  The next tune was the discolicious "Get Myself Into It", and Luke let the crowd sing "why not help me do it" a couple of times.

Mattie sang about five or six tracks, including "Sister Savior" and "Pieces of the People We Love", which sounded great with its creeping beat.  No surprise, "House of Jealous Lovers" got the biggest crowd response, and sounded fuzzy, but that made it even easier to dance to.  The same goes for "Killing".  Luke and Mattie danced most of the time, and everybody had an easy time feeding off of their energy.  At the end of "The Coming of Spring", Luke held his guitar out like a machine gun, which had been mowing us down all night.

All in all, there was a great back-and-forth energy between the crowd and band, and the performance was top notch.  Luke asked us to "do something brave", which turned out to be the kiss-your-neighbor-on-the-count-of three activity they pulled in NYC a couple nights before.  Gotta love it.

Sydney’s The Presets, who opened, were a solid brand of electrodance, with infectious DFA-style move-bustin’ grooves.  They did a hell of a job "making friends" and warming up the crowd.  Catch The Rapture on tour if you still can, and we should all hold hands and pray that they do another tour soon.

The Long Blondes : Someone To Drive You Home

The Immediate : In Towers & Clouds