The Raveonettes : Raven In the Grave

<img src="http://www.qromag.com/wp-content/uploads/2011/04/theraveonettesraven.jpg" alt="The Raveonettes : Raven In the Grave" />With echoes of The Cure and My Bloody Valentine that resonate through the album, <i>Raven In the Grave</i> sounds... 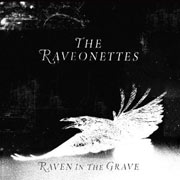 If you still don’t know The Raveonettes, you might shrug them off as some indie band gimmick.  The Danish duo has the girl/guy dynamic down to an aesthetic science with a Debbie Harry-Kate Moss hybrid in front woman Sharin Foo and a post-punk poster-boy in Y chromosome Sune Rose Wagner.  But back in 2002, these Danes were named the harbinger of the new-new wave and have spawned a slew of fuzz pop bands in their wake.

If somehow Raven In The Grave is your first sonic vision of The Raveonettes, you might be surprised to see their discography is ten albums long and varies between LPs, EPs and even a Christmas album.  The many haunting electric overlays, disturbingly sweet synthesizers and classic two-part harmonies are so on trend with the young bands out of Brooklyn, L.A. and San Francisco these days, you might mistake them for a couple of the in-crowd.  Knowledge of their influence has been underwhelming, but the list of dispersed shows in only musically educated cities with local sub-cultures shows how impacting the band has been.  You can find them cruising the West Coast from L.A. to Portland to Seattle after back-to-back dates at Music Hall of Williamsburg (QRO venue review) in Brooklyn.  They’ll grace the stages in various keystone cultural/college towns like Vancouver and Northampton, Mass.  The Raveonettes have gained indie notoriety the world over, booking gigs in major music cities like Buenos Aires, Madrid, Paris and London.

Click here for photos of The Raveonettes at 2011 Terraneo Festival in Sibenik, Croatia in the QRO Concert Photo Gallery

Click here for photos of The Raveonettes at Troubadour in Los Angeles, CA on May 5th, 2011 in the QRO Concert Photo Gallery

It’s not like they couldn’t be mainstream.  The well-titled first single off Raven, “Forget That You’re Young”, is an easily remixable pop tune under four minutes long, and is blissfully nostalgic.  For longtime Raveonettes fans, it may feel a little too familiar, but the following track “Apparitions” is more ambitious lyrically and vocally.  Dark materials like drugs, sex, crime and general moroseness has always been the fodder of The Raveonette’s youthful, gothic anthems, but “Apparitions” is like an invitation into unearthed grave with Foo and Wagner easing you six feet under.

Though the band announced there wasn’t any surf sound this time around, the song “Ignite” works in a semblance of early ‘60s wet electric reverb, which at this point must be a natural tendency.  “Summer Moon” and closer “My Time’s Up” are swoon worthy serenades as romantic as a midnight séance.  The tenebrous “Evil Seeds” is a suspenseful song whose lyrics birthed the album title, and is a natural follow up single to “Forget”.  With echoes of The Cure and My Bloody Valentine that resonate through the album, Raven In the Grave sounds like the most instinctual move from The Raveonettes since 2007’s Lust Lust Lust (QRO review).