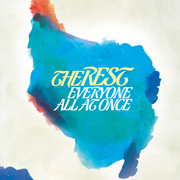 When Hamilton, Ontario’s The Rest first appeared a few years ago with Atlantis, Oh Our Saviour (QRO review), the young, many-person ensemble seemed to draw from the Canadian indie-collective sound of such famed compatriots as Arcade Fire (QRO live review) and Broken Social Scene (QRO spotlight on).  The Rest did hew more towards the orchestral strains of Arcade Fire than the pop-friendlier ways of Broken Social Scene, but when those catchier elements were used, like on Atlantis’s first half, they were used very well.  Yet with their follow-up, Everyone All At Once, the band makes the decision to embrace their high orchestral side, leaving a record that is accomplished for such a young outfit, but does leave behind what they did so well, and is perhaps more ambitious than they really should be at this point.

The Rest’s grand designs come out right from the start with openers “Coughing Blood/Fresh Mountain Air” and “Modern Time Travel (necessities)”.  The high way of Everyone is roughly divided between almost indie-folk beauty and a more pressing plead, with the latter style being the stronger.  On pieces like “Phonetically, Phonetically”, “Apples & Allergies”, and “Drinking Again”, The Rest are too in love with their new sound, one that needs expert, expert chops to pull off (those three also aren’t helped by being placed back-to-back-to-back on the track listing).  Especially for someone who knows the standouts of Atlantis, this feels too far in a direction away from that record’s best moments.

However, when The Rest add some pressure to their sound, there is a marked improvement.  This comes through mainly at the end (another way Everyone differs from its predecessor), starting with “Blossom Babies Part Two”, which gives some force to the emotion first displayed at Everyone’s start.  A driving rhythm cuts through the final three tracks, “Walking On Water (auspicious beginnings)”, “The Lady Vanishes”, and the title piece, with a march-drum on “Walking”, fuzzy atmosphere & power on “Vanishes”, and a catchy flow on “Everyone”.  If this is the direction The Rest look to move forward in, their prospects are certainly bright.

The Rest so successfully drew from the indie-collective sound on Atlantis (at least on the first half) that one could be forgiven for being disappointed that they haven’t followed that route.  Going towards the classical/orchestral (more akin to The Decembrists – QRO album review – than their north-of-the-border compatriots) is, however, bold and daring, given the difficulty of tackling that style.  And though they don’t measure up all the time, The Rest are showing the ability to not just handle their new nature, but also do something with it.