The Reverberations of Steve Reich 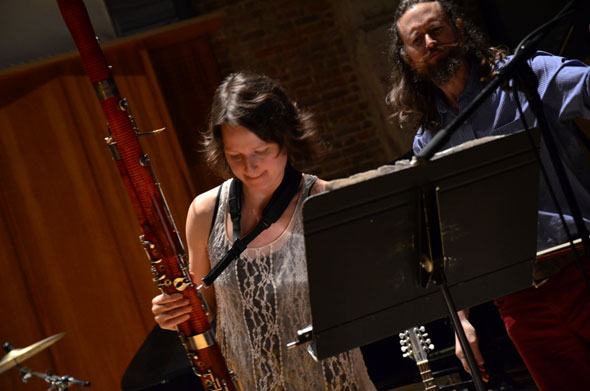 If you’re not familiar with the work of Steve Reich, you probably should be.  He has influenced more artists in the past 30 years than you could probably name, pioneering the art of minimalist music in all genres, spanning the globe.  Reich has historically influenced the path of modern music today in a truly spectacular manner, most notably in twentieth century classical music.  The world renowned venue the Barbican put together a series of concerts in celebration for Reich’s 75th birthday, a set of six marathon sessions stemming the weekend of the 7th and 8th of May.  Artists from throughout the globe swamped to London to play at concerts in the beautiful setting of St. Luke’s, a beautiful 18th century, Grade One-listed Hawksmoor church and the foremost U.K. orchestral music education centre, and the Barbican Centre, Europe’s largest multi-arts venue which showcases a diverse range of art, music, theatre, dance, film and education events, not to mention home of the London Symphony Orchestra.

QRO had the tremendous opportunity to attend Session 2 of 6 on May 7th, held at the beautiful St. Luke’s in the heart of central London, to witness some of today’s most forthcoming performances from artists who have all personally felt the influence of Reich on their work.  Each session of Reverberations included mind-blowingly talented artists, Session 2 being no exception.  The Kronos Quartet, Derek Johnson, and So Percussion performed a number of pieces throughout the weekend, but it was in Session 2 to which our ears were graced with a number of performances, including both U.K. and world premieres, adding to the sheer magic and exclusivity of the event. 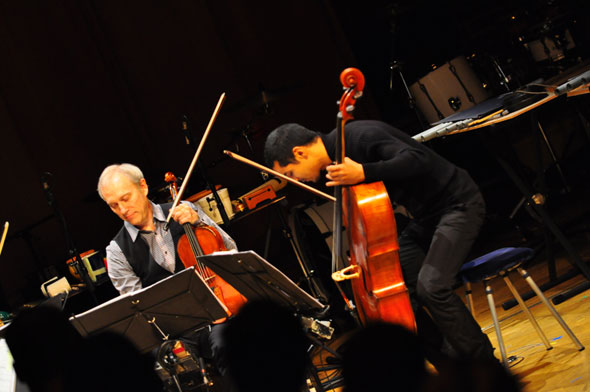 Opening Session 2 was the Kronos Quartet, one of the most established artists in modern classical music today.  Hailing from San Francisco, the award-winning quartet have pushed the boundaries of a string quartet can achieve over the past 30 years, with Session 2 being no exception.  It’s extremely difficult in essence to sum up what the Kronos Quartet do.  With a wide set of influences, this collective of four extremely talented men aren’t your typical neo-classical bunch.  Delving into influences ranging from Mexican folk, movie soundtracks to good old-fashioned rock ‘n’ roll, each piece the Kronos Quartet performed differed, creating a varying movement between each piece yet draw in the listener in with a unique intensity.  The Quartet have had over 400 pieces commissioned for them over their time together, and in line with this, each of the three pieces played in this session were composed by different individuals – Michael Gordon, Scott Johnson, and Bryce Dessner – the latter, who one may be more familiar as guitarist of Brooklyn based band, The National (QRO spotlight on).  Dessner’s piece, "Tenebre" was a world premiere, and included recorded vocals from Sufjan Stevens (QRO live review).

Each piece the Kronos Quartet played expressed a vital, energized sound with the precision and expression that has made them so successful, throughout their long spanning career.  With minimalist undertones from each piece, there was also a notable Reich presence with off-the-wall, experimental beats, a departure from what often those who are not so exposed to ‘classical’ music assume the genre is made up of; the classic 4/4. 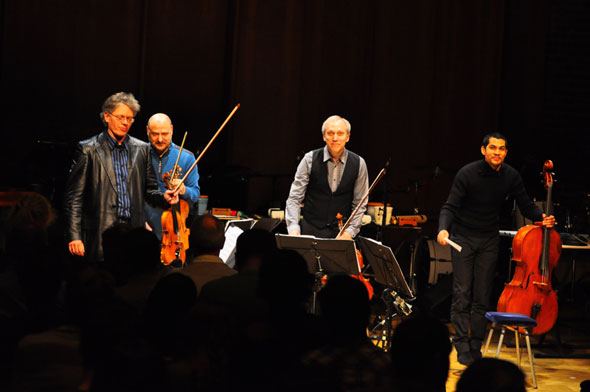 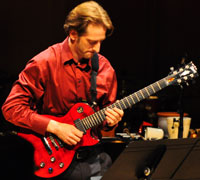 Reich’s influence throughout the evening was also seen through performances of his very own work, with Derek Johnson performing "Electric Counterpoint".  Solely a man and an electric guitar, Johnson demonstrated typical Reich characteristics throughout this piece, making it such an appropriate piece to celebrate Reich’s work.  With loops and phrasing patterns, Johnson demonstrated how even when Reich’s work was cut down to it’s simplest, Reich’s defining musical innovations are truly unmistakable. 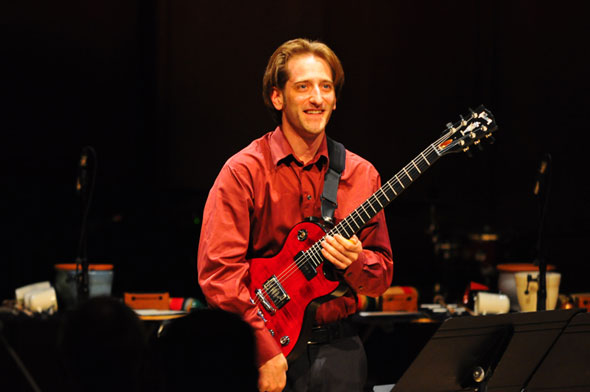 Reich’s signature style however has far moved on from the circles that Reich started out in.  In true experimental style, So Percussion performed "The So-Called Laws of Nature", a piece composed by David Lang, yet another award-winning composer.  An intense, complex piece, four young Yale graduates who make up the collective of So Percussion performed using countless pieces of percussion, both traditional and non traditional, to create an ever changing and multidirectional piece.  With both tuned and non-tuned percussion, So Percussion showcased their experimental zany style with repetition and rhythm pushed to the very limits.  With masterful skill and precision, the creation movement and layers and sections provided great engagement – if you skip a beat, you don’t know what you’ll miss. 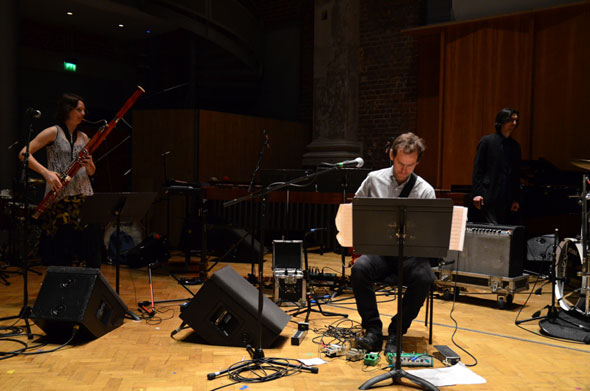 However, in a change of direction to the programme was the final

act of Session 2, Clogs.  Made up of four musicians hailing from the States and Australia (the 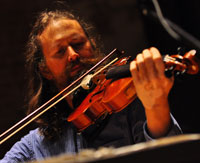 Australian being Padma Newsome, former touring string player/keyboardist/vocalist of The National), and most notably Bryce Dessner, one of New York’s finest upcoming composers, curator of Cincinnati’s MusicNOW festival (QRO Festival Guide), and of course, guitarist of indie’s finest, The National.  However, Bryce, Padma and company’s talents are not limited to the ‘independent’ realm.  Although noted as a classical ensemble, Clogs combine classical influences and rock in a compelling, accessible form.  Performing various tracks off their five albums, Thom’s Night Out (2001), Lullaby for Sue (2003), Stick Music (2004), Lantern (2006) and The Creatures in the Garden of Lady Walton (2010), Clogs wowed attendees with a display of true musicianship, with short pieces the band have put together over their career spanning over ten years. 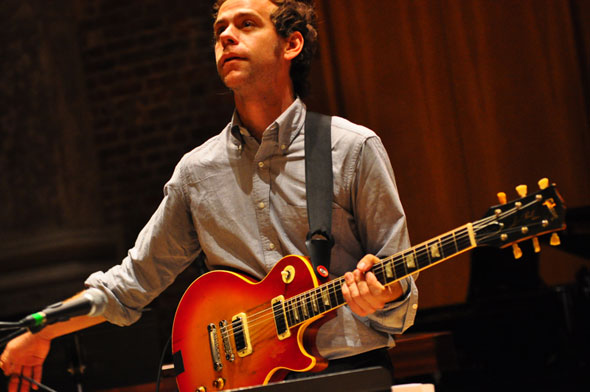 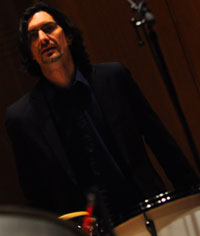 Clogs explained their writing process during the session, describing how each member writes separately and rehearse with basic ideas that the band work on in jam sessions and work into live performances, which they work into pieces.  The results, as seen in this session, are magical.  Elegant compositions with delicate arrangements display the many influences these four individuals have, folky, modernist and romantic, extending into story telling through song and experience, with great immediacy.

It’s clear to see why Clogs have become critically acclaimed, receiving accolades in both the independent and classical scene.  Each member of this collective is exceptionally talented – no surprise given the circumstances under which the members met: Yale School of Music.  Short songs paint fairytale like pictures through delicate arrangements and meaningful, reflective, well placed lyrics – yet have an amazing capability to resonate in a way incomparable so much of today’s modern music. 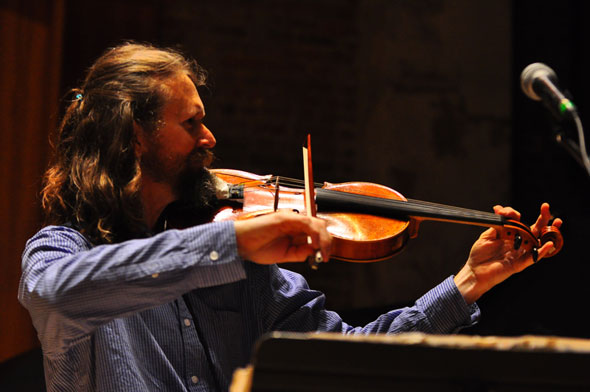 The variation of material demonstrated how throughout their long-spanning career, the band have explored the many different musical paths, using sounds, textures and patterns drawn from across genres in so many different ways, yet consistently accessible.  Watching Clogs is an intense experience; for music so easy on the ears, it astounds and amazes to see the complexity of their pieces that come so naturally.  This is particularly true of the masterful Thomas Kozumplik, who uses so a variation of instruments from the gong, steel drum, to the glockenspiel, who is able to cater so well and with such precision as an accompaniment.  It is notable that these musicians – Clogs, as well as other performers of the Reverberations weekend – understand something essential about the art of creating music – that it does not have to be the most complex or the most deafening, but that timing is key; a true Reich characteristic.

Clogs provided a truly stupendous introduction to those unfamiliar with their material – after all, on paper, it’s s exceedingly difficult to describe music that transcends genre and definition and is nothing but simply sheer beauty. 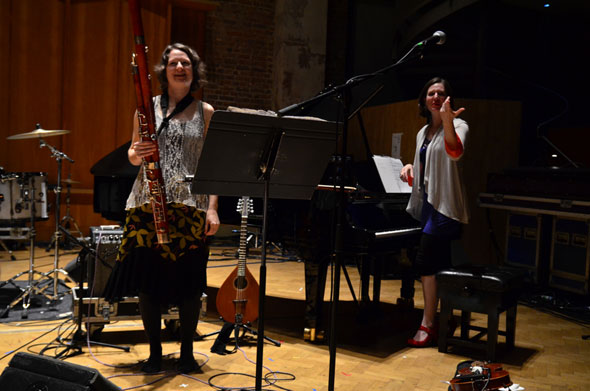