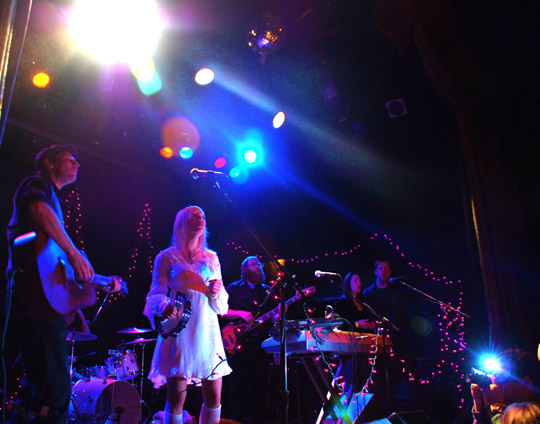 Click here for QRO's interview with The Rosebuds' Kelly Crisp

Click here for photos of The Rosebuds at Music Hall in Williamsburg in Brooklyn on May 11th, 2008 in the QRO Concert Photo Gallery

Click here for QRO's review of The Rosebuds at Music Hall in Williamsburg on January 18th, 2008

Click here for photos of The Rosebuds at CMJ 2007, at Bowery Ballroom, in the QRO Concert Photo Gallery

Click here for photos of The Rosebuds at Bowery Ballroom on May 24th, 2007 in the QRO Concert Photo Gallery

The Rosebuds came to New York City at a relatively inauspicious time: it was, as singer/guitarist Ivan Howard said, “The coldest night in seventeen years,” and the husband-and-wife duo reflected that, draping the stage at Bowery Ballroom (QRO venue review) in Christmas lights, and singer/keyboardist Kelly Crisp (QRO interview) emerging in a white winter fur coat – with her very blonde hair, she had the look of a ‘snow queen’.  What’s more, Friday, January 16th was only a day removed from the United Airlines crash on the Hudson – a flight that was supposed to be going to North Carolina, The Rosebuds’ home state.  But the band managed to heat up the crowd and their material with one of their best shows to-date.

After the upbeat, dance-speed synths and rhythms on their third full-length, 2007’s Night of the Furies (QRO review), Crisp and Howard shifted to a stripped, sadder, even alt-county sound on last year’s Life Like (QRO review), and while more heartfelt, Life Like doesn’t translate as naturally to an exciting live show as Furies does.  But instead of shying away from the new record & relying too much on the prior one, or shifting their live set to a more downbeat tone, The Rosebuds managed to successfully integrate Life Like into a performance that saw a lot of older material as well.

Technically, the evening began with Life’s whistling “Hello Darlin’”, but that was merely a recording played over Bowery’s speakers (not done live because a friend did it so well on the record, “And there’s no way that we can reproduce what he does live, without having him there” – Crisp, QRO interview – though he does live in New York…), with only the string of Christmas lights visible on the stage.  “Hello” did serve as a nice intro for the band’s emergence and first (real) song, “Blue Bird”, and its sweet, soft refrain (but also meant that Crisp didn’t do her customary high-fives with the crowd to start a show).

While “Blue Bird” would have fit in well on Life Like, it was actually from 2005’s Birds Make Good Neighbors (it’s doubtful the passengers on that flight to North Carolina the day before feel that way…), a record that would end up being featured as often as Life Like in the set list (QRO photo).  The Rosebuds hit up the new record for the first time (for real) subsequently, with its opening & title track, yet both that and the following (on record & that night) “Cape Fear” both played more electric and energetic at Bowery, as the band wisely took some of the spirit of Furies and injected it into the newer material.  Furies proper returned with crowd favorite “Cemetery Lawn”, but instead of staying in that vein, The Rosebuds went further into the past with a Birds three-peat, which also managed to shift the evening into Life Like’s alt-country sing-a-long vein: “Hold Our Hands and Fight” brought out the first audience chorus participation, while the twang-y “Leaves Do Fall” saw Crisp and Howard duel and duet on vocals. 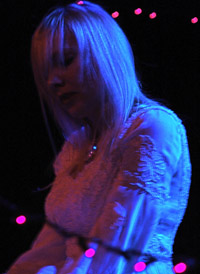 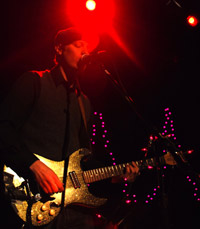 Two friends of the band emerged from backstage to provide back-up vocals on the swaying “Shake Our Tree”, inspiring the crowd to join in even more.  But ultra-impressive was “Nice Fox” (and not just because there were now four back-up backstage singers…), the first of four in a row from Life Like.  Howard introduced the track with this story about their actual fox:

We live in downtown Raleigh, and it has woods behind our house.  We have a lot of bands come into town and stay with us.  Every once in a while, a band will be driving to our house and they see a fox run across our house, ‘Hey, is that a fox?’  ‘Yeah, we got a fox – it’s not a big deal; it’s our fox…’

And I was tearing down a shed for insurance purposes…

(Howard) And it took a really long time, too, ‘cause I had to wait every week for the trash can to come, and I’d put a piece of the giant shed in the trash can.

(Howard) So I was so excited, the last day.  I got one more piece of wood, lying there on the ground: ‘Fuck yeah – I’ve been doing this for two years.  And I beat the man – I didn’t rent no big trash can!’

Lift up the board, and there’s this dead fox. (moans from crowd) I know!  And it was our fox.  Evidently, it had just died, like that day.  We didn’t know what to do with a dead fox, so Kelly was like, ‘Let’s bury him, and make a cross, and write ‘Nice Fox’ on it.’  So we did.

Yet, despite that sad ending to the introduction, “Nice Fox” was uplifting, bringing the band and the crowd into Howard-orchestrated harmonies.

“Border Guards” might have been a bit too somber to follow a brighter “Fox”, but the strong “In the Backyards” took the Life Like live ball and raised its wistfulness into grandness.  And “Bow To the Middle”, the last number from the new record on the night, played even more dance-tastic, thanks to Howard, before starting the number, showing off their new dance moves to a slow-mo snippet of the song (even if it was too packed at Bowery for the crowd to do all the steps).

The Rosebuds playing "Bow To the Middle" live at Bowery Ballroom in New York, NY on January 16th, 2009:

Following Life’s most dance-able number with Furies’s in “Get Up Get Out” (after Howard returned the cell phone that someone in the audience had lost, which had managed to make its way on stage) was a natural choice, but The Rosebuds did make a poor decision in playing “Get Up” slower, more slow disco-dance, which really took away some of the piece’s energy.  Perhaps they had played that song, a live staple since its release, the same way too many times – but they didn’t hesitate to go into the encore break on Birds’s crowd-favorite “Boxcar”, exactly as you know and love it live.

The Rosebuds returned for their encore with an even older fan-favorite, “Back To Boston” (from 2003’s debut full-length, The Rosebuds Make Out).  Like when they played it at sister-venue Music Hall in Williamsburg (QRO venue review) last January (QRO live review), Howard changed up the lyrics for the locale: while Music Hall had “I’m going / Back to Brooklyn”, Manhattan had “New York City is where I’m heading” (replacing Somerville).  Unfortunately Furies’s “I Better Run”, like “Get Up”, wasn’t as strong as previous, numerous live renditions, but the audience was lit up by the night’s last two numbers, Make Out’s “Drunkard’s Worst Nightmare” (how can you not like a song that begins, “She’s buck-wild with her clothes off every night!”?…) and Birds’s “Wildcat”, in which Howard forgot the second verse – and invited a fan up from the crowd to join him on the mike. 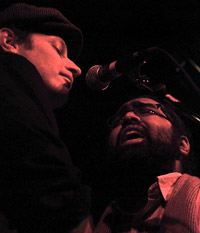 While that fan was a fella, the crowd at Bowery was decidedly tilted more towards the female persuasion, but they were the kind of girls every indie-guy actually wants to see at a show: not just good-looking and great-dancing, but also excited, in a not-teeny-bopper way.  The Rosebuds have a lot of regular fans who turn up every time they come to a town, including 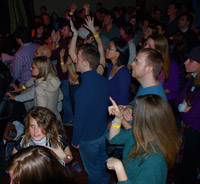 New York (undoubtedly there was Ashley, one of the band’s displaced New Orleans fans who saw them only a few nights before Katrina – QRO interview), making the crowd a knowledgeable and enthusiastic one – plus a larger one than you’d expect on “the coldest night in seventeen years.”  But it all made for a warm, fun night. 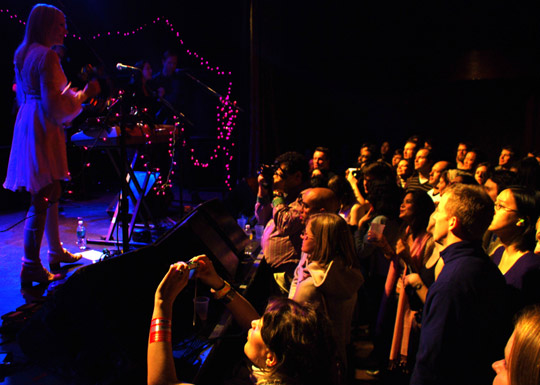