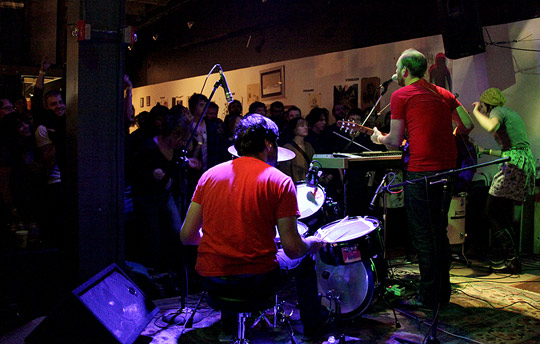 Click here for photos of The Rural Alberta Advantage at 2010 Primavera Club Festival in Barcelona, Spain in the QRO Concert Photo Gallery

Click here for photos of The Rural Alberta Advantage at SXSW 2010 in Austin, TX in the QRO Concert Photo Gallery

The Canadian band The Rural Alberta Advantage packed it in at Backspace, Portland’s only exclusively all-ages venue, on Friday, December 18th.  There were a lot of young’uns in attendance, a few folks pushing fifty, and plenty of fans in between.  It was a great mix, the kids at the show, especially.  They kept spirits high and energy kicking, even when Nils Edenloff, lead singer, guitarist and sometime keyboardist, occasionally got irritated with some of the more obnoxious audience members’ comments (example: someone requested "Oh Canada").

If Edenloff was a wee bit cantankerous, it was only because this was the band’s second-to-last show of a nearly year long tour.  The band didn’t need to fill any awkward between-song gaps, luckily.  They powered through 15 songs in just over an hour.  It was a quick, dirty, and passionate set, and the band members (including Amy Cole on 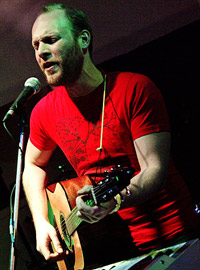 backup vocals, auxiliary percussion, and keyboards, and Paul Banwatt on drums) were maybe relieved when it was over.  The RAA charmed through tough (and true) love.

With only three songs played that do not appear on RAA’s debut LP, Hometowns (QRO review), audience members cheered with recognition of almost every song, and the band members nailed every tune with a precision born only from playing the same songs live for a year.  The set opened with "The Ballad of the RAA".  Edenloff delivered each line with a gruff heart of yearning.  His distinctive singing style is folk-y grumble imbued with a huff of helium.  If this sounds unlistenable-well, sometimes it was.  But it always came off as disarmingly honest.

The Rural Alberta Advantage playing "The Deadroads" live @ Backspace in Portland, OR on December 18th, 2009: 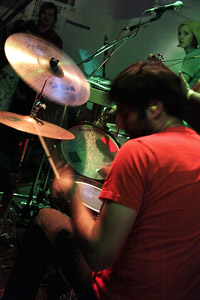 Banwatt’s drumming was the backbone of the songs.  He executed drum and bass-influenced beats expertly, which didn’t seem like they should work with the Americana (Canadacana?) leanings of Edenloff’s guitar work and the simple four-chord song structures.  Banwatt is also what keeps the songs from straying into formulaic-land.  The RAA’s songs generally go like this: slow start; sudden, then sustained crest; tender, soft breakdown; and either a climatic culmination or a gentle fade-out.  In at least half the songs, Cole added pretty harmonies to Edenloff’s lead duties.  Her understated keyboard lines usually provided the low, graceful, long phrases needed in the rhythm- and bass guitar- absent instro lineup.  A song with all these elements was "Luciana", a crowd favorite with an anthemistic sing-a-long.  "Luciana" was the queen of the set.

"Frank, AB," a song reminiscent of My Morning Jacket (QRO live review), followed "Luciana".  It had a wide-open electronica feel, thanks to Banwatt’s liberal use of hi-hat, Edenloff’s eerie and triumphant chorus "oohs," and Cole’s atmospheric keys. 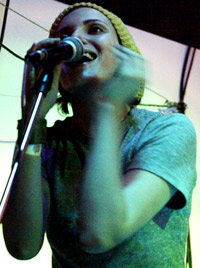 Both "Edmonton" and "Four Night Rider" introduced more prominent vocal harmonies between Cole and Edenloff.  Together, they created a power that, inexplicably, made you want to hear Gloria Gaynor’s "I Will Survive".  When Cole sang two lines alone on "In the Summertime," one wanted more of her.  Her voice was the sugar to Edenloff’s salt.

And salty was Edenloff on a new song called "Tornado".  The RAA’s hook may be their calculated tension and release, but we did not know release until the aptly titled "Tornado".  He said, before launching into it, "We’re gonna try something new and I guarantee it’s gonna shred my voice-but I don’t really care because we only have one more show."  It was fortunate that he didn’t care.  Edenloff’s strangled voice did indeed shred, Banwatt rhythmically ‘brought it’ with his kit, and, "Cole’s xylophone was the icing on this remorseful shit-cake."  And by shit, meant gonzo, in the best possible way. 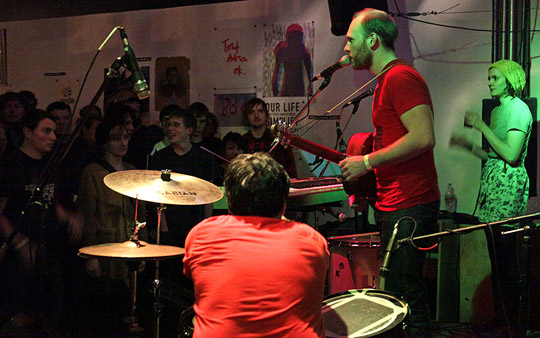 R. Garcia : Everything Ever